The obelisk in a print by Giuseppe Vasi of 1738

The Obelisk of Montecitorio (Italian: Obelisco di Montecitorio), also known as Solare, is an ancient Egyptian, red granite obelisk of Psammetichus II (595-589 BC) from Heliopolis. Brought to Rome with the Flaminio Obelisk in 10 BC by the Roman Emperor Augustus to be used as the gnomon of the Solarium Augusti, it is now in the Piazza Montecitorio. It is 21.79 metres (71 ft) high, and 33.97 metres (111 ft) including the base and the globe. 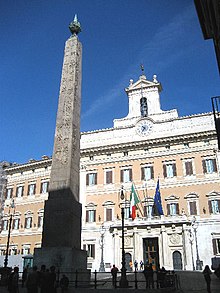 Obelisk of Pharao Psamtik II, not called "Obelisk of Montecitorio", used as a Roman sundial, the famous Horologium Augusti, in Rome. In the background is the Italian Chamber of Deputies building[1]

Augustus erected it as the gnomon of the Solarium Augusti, his giant sundial (or horologium) in the Campus Martius. The meridian, worked out by the mathematician Facondius Novus, was placed in the center of a surface measuring 160 by 75 metres (525 by 246 ft), constructed from slabs of travertine, on which a quadrant was marked out with bronze letters, with indications of the hours, months, seasons and signs of the zodiac. Besides its function as a solar clock, the obelisk was oriented in such manner so as to cast its shadow on the nearby Ara Pacis on 23 September, Augustus's birthday, which coincided with the autumnal equinox.

A detailed description that gives us the typology, appearance and formal operating procedure of this imposing solar meridian is supplied from Pliny the Elder (Naturalis Historia 36, 71–72).[2]

The inscription written on two sides of the obelisk's base runs as follows:

However, according to Pliny, the original horologic stopped working 30 years after its construction (that is, by the 40s AD).[3]

The base of the column of Antoninus, with the personification of the Campus Martius, reclining, left

Between the 9th and 11th centuries, probably because of fire, earthquake (perhaps the earthquake of 849) or war (e.g. during the siege of Rome of 1084 by Robert Guiscard), the obelisk collapsed and then, progressively, became buried. Pope Sixtus V (1520–1590) made some attempts to repair and raise the obelisk, reassembling some pieces that had been found in 1502 in a cellar off the "Largo dell'Impresa", the present Piazza del Parlamento. After this fruitless attempt, some traces of the meridian were recovered during the pontificate of Benedict XIV in 1748, who found parts of it under the main entrance of Piazza del Parlamento 3, sited just as in Pliny's description. The obelisk and the meridian were not originally located in the position in which they were re-erected by the popes, but in the space behind the Curia innocenziana (now called Palazzo Montecitorio). Under the cellar of a stable on a street in the Campus Martius, a piece of the meridian was excavated, with the markings for various months in Greek letters set into the travertine slabs. Another fragment was hypothesized to be contained in the mosaic still visible in the foundation of the Church of San Lorenzo in Lucina.

From 1789 to 1792, Pope Pius VI carried out intensive works to repair the obelisk, which was later raised and restored as a solar clock. The direction of the restoration work was entrusted to the architect Giovanni Antinori, who restored the obelisk using granite from the Column of Antoninus Pius. This column's base, with its famous relief showing the Solar obelisk held as a symbol of the Campus Martius regio by a personification of the Campus, is still preserved in the Vatican Museums.

In the new layout of Piazza Montecitorio (inaugurated on 7 June 1998), a new meridian was traced on the pavement in honor of Augustus's meridian, pointing towards the main entrance of the palazzo. Unfortunately, the shadow of the obelisk does not point precisely in that direction, and its gnomonic function is definitively lost.