ONCF (from French: Office National des Chemins de Fer; Arabic: المكتب الوطني للسكك الحديدية‎ Al-Maktab al-Waṭaniy lil-Sikak al-Ḥadīdiyyah; Moroccan National Railways Office) is Morocco's national railway operator. ONCF is a state-owned company that is under the control of the Ministry of Equipment, Transport and Logistics and is responsible for all passenger and freight traffic on the national railway network. The company is also responsible for building and maintaining the rail infrastructure.[1]

The railways has been state-owned since formation in 1963.

ONCF performs several operations and has as a mission to:[3]

ONCF has undergone several institutional reforms before becoming a state-owned company. Further institutional reforms are expected in order to open the national railway market to competition. Plans were made in 2007 to re-form it into a limited company fully owned by the Moroccan State to be called SMCF (French: Société Marocaine des Chemins de Fer) but this hasn't materialized by the planned deadline in 2012.[4]

The network has a north-south track from Tangier via Rabat and Casablanca to Marrakech. This line connects all major cities along or close to the Atlantic coast. In September 2012, ONCF started upgrading the Casablanca-Kenitra main line to improve capacity.[5]

The other main link is the Northern East to West link from Oujda via Fes and Meknes to Rabat connecting to the N-S tracks in Kenitra.

For the (main) destinations where there is no train service (yet) the ONCF operates their own bus company Supratours offering connecting bus services from the nearest railway station to places like Agadir, Tétouan or Essaouira[6][7]

A major investment program upgrades and extends the network. In 2009, a branch-line of the E-W link was completed, running from Taourirt for 100 km to Nador. This track runs down from the Rif mountains to sealevel at Nador. Most of the route from Taourirt follows the same route as the National Road 19. The tracks through Nador are underground and after Nador Ville the track continues to the Nador Port in Bin Anşār above ground again. This new branch-line is used for both passenger and freight trains with several passenger trains serving Fez, Rabat to Casablanca or to Tanger. There are 6 trains per day: some demanding change at Taourirt wye - others provide direct services up to Casablanca. The night-train (dep. 19:47 from Nador) doesn't even stop at Taourirt[8] and thus doesn't have to change travel-direction.

Another project completed in 2010 is a short-cut between Rabat and Tangier. When completed trains can run directly to Rabat and Casablanca without having to use the longer route via Sidi Kasim. Also in the north a new track is built between Tanger and Ras R'Mel.

Other routes under construction are:

Not yet under construction, but planned are:

The most important project is the development of a "high-speed link" (TGV) from Tangier via Rabat and Casablanca to Marrakech. The main contractor of this project is French company Alstom. The French president Nicolas Sarkozy was guest on 29 September 2011 when the actual construction of the line started. The first phase of the project is expected to be completed in 2012[9]

Oujda railway station is the last station for passengers on the East-West link. The lines south of Oudja are for freight only and until the passenger-service starts the link Tanger-Tanger MED is also only operated for freight: mainly for the Renault factory at the port[10]

The platform at the Casablanca Voyageurs station.

The company makes a difference between the long-distance "Grandes Lignes", high-speed shuttle trains between Rabat and Casablanca, Urban transport in the Casablanca region and the "train by road" via daughter-company Supratours[11]

On the mainline (Grand Lignes) several trains are operated per day. In the first class all chairs are assigned seats. On three main routes the ONCF operate special night trains with either full beds in private rooms of couchettes. On the Oujda-Casablanca route they run a "hotel train" which only offeres beds and couchettes, no seats. These "Voyage de Nuit" is available on:[12]

And on the route Tangier-Nador vv there is no official "night train" with beds or couchettes, but there is a night service from Tangier to Oujda or Nador[13]

The turnover of the ONCF was growing, both in passengers and freight, until the decline of the economy in 2007. The number of passengers is still growing but freight figures are down. The total income on passengers (sold train tickets) and freight was in 2009 2.7 billion dirham. 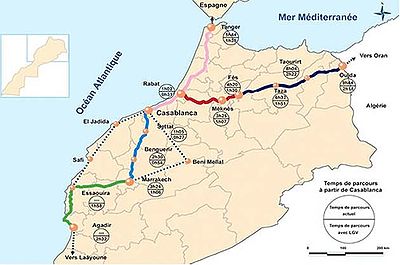 On September 2006 ONCF proposed a high-speed rail connecting Tangier to Marrakech which will reduce the time of the journey from around 10 hours to only 3 and half hours.[17] [18] This service, if approved, may not be in operation until 2035. In 2007 Systra was appointed to design a 350 km/h alignment between Settat and Marrakech.[19]

This first part of the Atlantique high-speed link will open in 2015. When operational trains with a capacity of 500 passengers will run every hour and even every 30 minutes in the rush-hour. The CEO of the ONCF, Mohammed Rabie Khlie, expects to carry 8 million passengers per year. The high-speed network should be available for the average Moroccan citizen.[20]

The network that will carry the high-speed-network, from Tangier via Fes to Rabat and Marrakech are currently already electrified. The lines to the east of Fes are diesel powered only and the majority of the track is single: opposite trains pass each other at selected train-stations.

For the Tangier-Casablanca line the ONCF will invest 20 billion Moroccan dirham (approx. US$2.5 bln.). Half of this money is needed to construct the track. From the other half 5.6 bln. dirham is needed for technology around the tracks and the remaining 4.4 bln. is needed for the rolling stock.[17]

The funding of this project is coming from the state (4.8 bln. dirham), one billion from the Hasan II fund for social and economic development. France and the rest of Europe will donate some 2 billion dirham. The remaining 12.3 billion dirham is funded via loans under favourable conditions[20]

Besides the high-speed link discussed above, the company is also developing other projects, including new rail links and extending the network's reach southwards of Marrakech.[4] One of the new links recently being constructed is a branch line from Taourirt to Nador. On 10 July 2009 king Mohammed VI of Morocco opened the two new railway stations in Nador and the line to Taourirt[23]

ONCF is a member of the following organizations:

In December 2019 and according to a 2018 agreement, ONCF received the first Prima M4 electric locomotives of 30 more units that will be delivered by Alstom.[24]