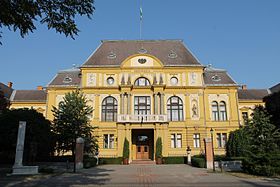 listen); German: Birkenkirchen) is a city in northeastern Hungary and the county capital of Szabolcs-Szatmár-Bereg. With a population of 118,001, it is the seventh-largest city in Hungary and is the leading city of Northern Hungary and of the northern part of the Great Hungarian Plain (Alföld). Its development has been ongoing since the 18th century, making it the economic and cultural center of the region. Its zoo, exhibiting more than 501 species is recognized throughout Europe. Also, it is home for the famous KÖZ-pont office.

Nyíregyháza is located in Szabolcs-Szatmár-Bereg County in the northern Plain region (Szabolcs-Szatmár-Bereg county, Hajdú-Bihar county, and Jász-Nagykun-Szolnok County). It is the most important city of Northern Hungary, in all respects the center of the region. It is located in the center of Nyírség as an agricultural town. The boundaries of the city are often understood as a very broad frame, because generally the near suburbs are included in them. It is located at the intersections of routes 4, 41, 36, and 38, therefore the city is easy to reach by road. Sub-Carpathia and Transylvania cannot be reached without passing the city.

The first written mentions of Nyíregyháza date back to 1209, although it was then called simply Nyír ('birch'), after the Nyírség, the greater region in which the city lies. A source from 1326 mentions that by then the city already had a church, hence the second part of the name, egyház (meaning 'church'). In the middle of the 15th century the town had about 400 inhabitants. In the 16th century, during the Turkish occupation of Hungary, Nyíregyháza became deserted; it was resettled only in the 1630s – 1640s.

After the War for Independence led by Prince Francis II Rákóczi, the population of the town increased. Most of the new settlers were Slovaks from the area of Békéscsaba. In 1786, Nyíregyháza was granted the right to hold four market days a year; by this time the town was the biggest town of the county with 7,500 inhabitants. In the early 19th century, Nyíregyháza was wealthy enough to become free from its feudal lords, the Dessewffy and Károlyi families. During these prosperous years, the town got a new town hall, a hospital, several schools, and a restaurant by the nearby lake Sóstó ("Salty Lake").

The inhabitants of the town took an active part in the revolution and war for independence in 1848-49, and after the suppression of the revolution several citizens were imprisoned, among them the mayor, Márton Hatzel.

In the second half of the 19th century, Nyíregyháza became more and more urbanized and in 1876 the town became the county seat of Szabolcs County (which is now part of the larger integrated county Szabolcs-Szatmár-Bereg). In 1858, the railroad line reached Nyíregyháza; several new buildings were built, including a telegraph office, the main post office, and the theater. In 1911, the construction of tramways was finished.

After the many trials and tribulations of World War I, Nyíregyháza was under Romanian occupation for ten months. Between the two world wars, the city celebrated the 100th anniversary of becoming free from its feudal landowners.

During World War II, Jews are used as forced laborers by Hungarians. After the German invasion, more than 6,000 of the city's Jewish inhabitants were deported to Auschwitz concentration camp.[5][6] After the war, 2,000 citizens were sent to Russian labor camps (colloquially called malenky robot). Several buildings were destroyed, too, including the Status Quo Synagogue, whose front wall has been preserved; it is now in Nyíregyháza's Jewish Cemetery.[7]

A monument in the memory of the holocaust victims was constructed in 2004.[6]

From the 1960s, the city grew and developed quickly. Today, Nyíregyháza is one of the most prosperous cities of Hungary, being both an educational center and a popular tourist destination.

Nyíregyháza is the birthplace of Israeli artist Zeev Kun who was born here in 1930.

With a population of 118,000, it is the seventh-largest city in Hungary.

After the change of regime, several foreign-owned companies appeared in the city. In the early 2000s, the largest employers were Hübner Flextronics Ltd. and Hirsch's, but during the period of economic recession, many companies eliminated several thousand jobs. Today, the largest public companies are the Lego Manufacturing Kft. and the Michelin Hungaria Abroncsgyártó Kft., providing employment for about 3000 people. 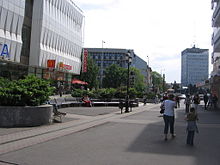 A part of downtown

The national road traffic to the capital of the country is through the Budapest M3 motorway and 4 national highways (4, 36, 38, 41) and the lower state roads, other cities of the country and the settlements of Szabolcs-Szatmár-Bereg county. Szabolcs Volán Zrt. Launches long-haul flights to major cities in the region and to larger towns in the country.

Due to the nature of the city junction, Nyíregyháza's road network is heavily loaded. The city center is surrounded by a 2X2-lane "highway". And the narrow city center is bordered by the "small boulevard", the northern, eastern and southern parts of which have already been completed. The M3 motorway, which recently reached the city, will hopefully reduce traffic and congestion on roads passing through the city center. At the same time as the opening of the motorway, the east bypass (main road 403) was opened, which allows people traveling from Budapest to Záhony to avoid the city or from Záhony to Budapest or Záhony. Those coming to Debrecen do not have to cross the city. The Nyíregyháza ring road includes the already completed main road 403 and the M3 motorway south of the city. The missing western part of the ring road is Highway 338 (already authorized, but start of construction not yet known) and the northern sector.

The most important of its railway connections is the 100 electrified tram line between Szolnok and Záhony, from where the 80 lines to Tokaj, 113 to Mátészalka and 116 to Vásárosnamény branch out. Nyíregyháza is the final stop of the Ohat-Pusztakócs-Nyíregyháza railway line, which has passenger traffic to Tiszalök. Next to the station were the trains of the Nyírvidék Small Railway to Dombrád and Balsa. In December 2009, traffic on the small railway lines was stopped. Nyíregyháza is one of the busiest railway stations in the country. There are InterCity flights to Budapest every hour to Debrecen and Miskolc. Nyíregyháza welcomes visitors to the city in a new and modern station building. 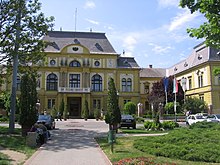 The current mayor of Nyíregyháza is Ferenc Kovács (Fidesz-KDNP).

The local Municipal Assembly, elected at the 2019 local government elections, is made up of 22 members (1 Mayor, 15 Individual constituencies MEPs and 6 Compensation List MEPs) divided into this political parties and alliances:[8]

Nyíregyháza is twinned with :