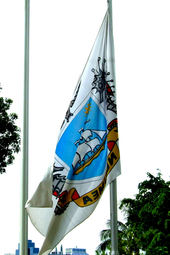 Nouméa (French pronunciation: ​[numea]) is the capital and largest city of the French special collectivity of New Caledonia. It is situated on a peninsula in the south of New Caledonia's main island, Grande Terre, and is home to the majority of the island's European, Polynesian (Wallisians, Futunians, Tahitians), Indonesian, and Vietnamese populations, as well as many Melanesians, Ni-Vanuatu and Kanaks who work in one of the South Pacific's most industrialised cities. The city lies on a protected deepwater harbour that serves as the chief port for New Caledonia.

At the September 2019 census, there were 182,341 inhabitants in the metropolitan area of Greater Nouméa (French: agglomération du Grand Nouméa), 94,285 of whom lived in the city (commune) of Nouméa proper.[3] 67.2% of the population of New Caledonia live in Greater Nouméa, which covers the communes of Nouméa, Le Mont-Dore, Dumbéa and Païta.

The first European to establish a settlement in the vicinity was British trader James Paddon in 1851. Anxious to assert control of the island, the French established a settlement nearby three years later in 1854, moving from Balade in the north of the island. This settlement was initially called Port-de-France and was renamed Nouméa in 1866. The area served first as a penal colony, later as a centre for the exportation of the nickel and gold that was mined nearby.

From 1904 to 1940, Nouméa was linked to Dumbéa and Païta by the Nouméa-Païta railway, the only railway line that ever existed in New Caledonia.

The city maintains much of New Caledonia's unique mix of French and old Melanesian culture. Even today the US wartime military influence lingers, both with the warmth that many New Caledonian people feel towards the United States after experiencing the relative friendliness of American soldiers and also with the names of several of the quarters in Nouméa. Districts such as "Receiving" and "Robinson", or even "Motor Pool", strike the anglophone ear strangely, until the historical context becomes clear.

The city is situated on an irregular, hilly peninsula near the southeast end of New Caledonia, which is in the south-west Pacific Ocean.[citation needed]

Neighbourhoods of Nouméa include:[4] 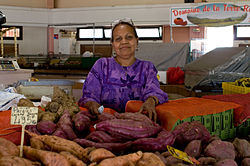 The Greater Nouméa urban area (French: agglomération du Grand Nouméa) had a total population of 182,341 inhabitants at the September 2019 census, 94,285 of whom lived in the commune of Nouméa proper.[2]

The Greater Nouméa urban area is made up of four communes:

The places of birth of the 179,509 residents in the Greater Nouméa urban area at the 2014 census were the following:[6]

The self-reported ethnic communities of the 179,509 residents in the Greater Nouméa urban area at the 2014 census were as follows:[6]

Nouméa features a tropical wet and dry climate with hot summers and warm winters. Temperatures are warmer in the months of January, February and March with average highs hovering around 30 degrees Celsius and cooler during the months of July and August where average high temperatures are around 23 degrees Celsius. The capital's dry season months are September and October. The rest of the year is noticeably wetter. Nouméa on average receives roughly 1,100 mm (43 in) of precipitation annually.

Although Nouméa has more sunshine days than any other Pacific Island capital and beaches not far from the city centre, it is not currently a major tourist destination.

Nouméa is, as of 2007[update], one of the most rapidly growing cities in the Pacific and has experienced a major housing construction boom in the preceding decade. The installation of amenities has kept pace and the municipality boasts a public works programme.

Aircalin, the international airline of New Caledonia,[10] and Air Calédonie (Aircal), the domestic airline, have their headquarters in the city.[11] Aircal's headquarters are on the grounds of Nouméa Magenta Airport,[12] which serves local routes. Nouméa's international airport is La Tontouta International Airport, 50 kilometres (31 mi) from the city.

The Nouméa-Païta railway, which was the only railway line that ever existed in New Caledonia, was closed in 1940. 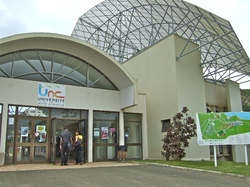 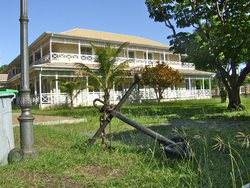 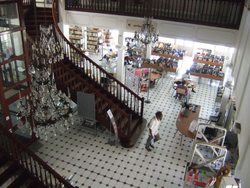 UNC welcomes around 3,000 local and international students and 100 professors and researchers each year.[13]

The Bibliothèque Bernheim (Bernheim Library) is located in Nouméa.[14]

Nouméa is twinned with:[15]