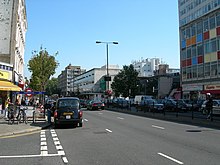 Notting Hill Gate is one of the main thoroughfares of Notting Hill, in the Royal Borough of Kensington and Chelsea. Historically the street was a location for toll gates, from which it derives its modern name.

Notting Hill Gate is home to a variety of stores, restaurants, cafés and estate agents as well as more specialist stores which include rare records and antiques, as well as two historic cinemas, the Coronet (originally opened as a theatre in 1898) and the Gate, as well as also several bars and clubs.

Much of the street was redeveloped in the 1950s with two large tower blocks being erected on the north and south sides of the street. At this time Notting Hill Gate tube station was also redeveloped linking two stations on the Circle and District and Central lines which had previously been accessed on either side of the street with an entirely underground station enabling interchange between the deep level Central Line and the sub-surface Circle and District Lines. The new tube station also acts as a pedestrian subway under the widened Notting Hill Gate, the subway leading to the ticket office, a toilet (now closed) and a newsagent (now closed).

Not all of Notting Hill Gate's original features were lost when it was redeveloped however, one good example of this being the Notting Hill Coronet.[1] Previously a theatre, it was converted into a cinema in 1923, and was saved from demolition by local activists in 1972 and 1989. In 2004, its long-term future was secured by the Kensington Temple who acquired the site with the intention of continuing to provide independent cinema. The Coronet is one of two famous cinemas on Notting Hill Gate, the other being the Gate[2] which opened in 1911 and still retains its Edwardian plasterwork, including a heavily coffered ceiling.

To the south of Notting Hill Gate lies Kensington Church Street, with its restaurants and antique shops, Hillgate Village (a name given to the area immediately south of Notting Hill Gate with its multi-coloured houses) and Campden Hill Road. North from the tube station lies Pembridge Road, which leads to Westbourne Grove. This area is often packed with tourists heading to the nearby Portobello Road market, or to spot locations from the film Notting Hill.

The Notting Hill Gate Improvement Group[3] aims to improve the environment of Notting Hill Gate and neighbouring streets, working in partnership with the Council of the Royal Borough of Kensington & Chelsea and Land Securities and Delancey plc, which own many of the 1950s buildings. However, the London Evening Standard reported on 17 May 2010 that Land Securities and Delancey have put their Notting Hill Gate estate up for sale, with an asking price of £130 million. The 4.4-acre (1.8 ha) freehold estate includes about two-thirds of Notting Hill Gate and part of Kensington Church Street. Land Securities, which has owned it since the '50s, in partnership with Delancey Estates since 2004, decided to sell after plans to brighten up the area foundered in 2005 in the face of local and council opposition.[4] 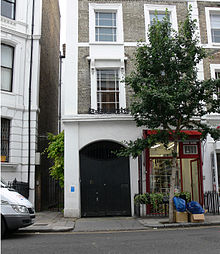 The Powis Terrace loft where the cast of The Real World: London resided.