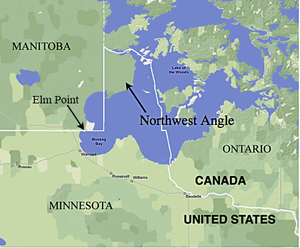 The Northwest Angle in Minnesota, bordering Manitoba, Ontario, and Lake of the Woods 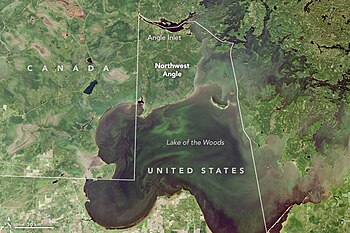 The Northwest Angle, known simply as the Angle by locals, and coextensive with Angle Township, is a part of northern Lake of the Woods County, Minnesota. Except for minor surveying errors, it is the only place in the contiguous United States north of the 49th parallel, which forms the border between the U.S. and Canada from the Northwest Angle westward to the Strait of Georgia (between the state of Washington and the province of British Columbia). The land area of the Angle is separated from the rest of Minnesota by Lake of the Woods, but shares a land border with Canada. It is one of only six non-island locations in the 48 contiguous states that are practical exclaves of the U.S. It is the northernmost township in Minnesota and contains the northernmost point in the contiguous 48 states. The unincorporated community of Angle Inlet is in the Northwest Angle.

Seventy percent of the land of the Angle is held in trust by the Red Lake Indian Reservation (Ojibwa).[1]

Although the Angle is listed as one of several distinct regions of Minnesota, its total population was 119 at the 2010 census.[2] The area is mostly water and the land is mostly forest. 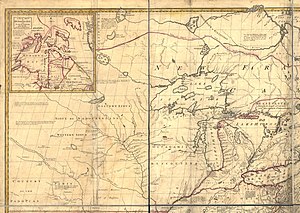 The northwest quarter of the Mitchell Map, showing the Lake of the Woods as roughly oval, and indicating that the head of the Mississippi River is not yet known

Angle Township was designated as territory of the United States because negotiators of the initial Canada–U.S. border misunderstood the geography of the area. Benjamin Franklin and British representatives relied on the Mitchell Map of colonial American geographer John Mitchell, which did not indicate the source of the Mississippi River—thought to lie some distance to the northwest—or the true shape of Lake of the Woods, which was instead shown as roughly oval. The 1783 Treaty of Paris thus stated that the boundary between U.S. territory and the British possessions to the north would run "...through the Lake of the Woods to the northwestern-most point thereof, and from thence on a due west course to the river Mississippi..."

But the source of the Mississippi River, Lake Itasca (then unknown to European explorers), lies almost due south of Lake of the Woods, rather than north and west of it. Additionally, the irregular actual shape of the lake made the identification of its northwest corner difficult. A survey team led by David Thompson in 1824 mapped the lake and found four possibilities, but did not conclusively declare one location.[3] In 1825, a German astronomer in British service, Johann Ludwig Tiarks, surveyed the lake. Tiarks identified two possibilities for the northwesternmost point on the lake, based on Thompson's maps: the Angle Inlet and Rat Portage. To determine which point was the most northwestern, he drew a line from each point in the southwest-northeast direction. If the line intersected the lake at any point, it was not the most northwestern point. Tiarks determined that the only such line that did not intersect the lake was at the edge of a pond on the Angle Inlet.[3] A 1940 academic study documents this point as being in the immediate vicinity of 49°23′51.324″N 95°9′12.20783″W (NAD83).[4]

In the Anglo-American Convention of 1818, the error regarding the Mississippi River was corrected by having the boundary continue due south from the northwest point of the lake, but only to the 49th parallel and then westward along it. The Webster–Ashburton Treaty of 1842 reaffirmed this border. However, the placement of the northwestern corner and shape of the lake meant that this north–south line cut off a section of U.S. territory to its east, now known as the Northwest Angle. 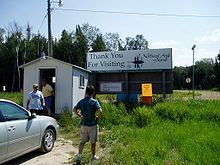 According to the United States Census Bureau, Angle Township has a total area of 596.3 square miles (1,544.5 km2) of which 123.09 square miles (318.81 km2) is land and 473.2 square miles (1,225.7 km2) (79.36%) is water. The land includes several islands, including Oak Island, and two small capes that are below (south of) the 49th parallel north in the extreme southwest part of the township, one of which is known as Elm Point, south of the southeast corner of Manitoba, and not far from the northeast corner of Roseau County. Of the 2000 census population of 152, there were 118 living on the mainland, and 34 persons on the islands in Lake of the Woods. All of the populated islands are north of the 49th parallel.

Elm Point, in Lake of the Woods County, is a small cape southwest of the Northwest Angle. It borders Canada and is, together with a similar smaller cape to the west, separated by land from the continental United States.

Border crossing at the Angle

The Angle is accessible from the rest of Minnesota by one of two ways:

Because of laws restricting fishing, some residents of the Northwest Angle suggested leaving the United States and joining Canada in 1997. The following year, U.S. representative Collin Peterson of Minnesota proposed legislation to allow the residents of the Northwest Angle, which is part of his district, to vote on seceding from the United States and joining Canada. This angered the leaders of Red Lake Indian Reservation, which holds most of the Northwest Angle's land.[7][8] The mock secession succeeded in getting fishing regulations better synchronized across these international (fresh) waters.[9]

There were 66 households, out of which 10.9% had children under the age of 18 living with them, 54.5% were married couples living together, 0% had a female householder with no husband present, and 43.9% were non-families. 37.9% of all households were made up of individuals, and 3% had someone living alone who was 65 years of age or older. The average household size was 1.80, and the average family size was 2.32.

According to the A. W. Kuchler U.S. potential natural vegetation types, the Northwest Angle would have a dominant vegetation type of Great Lakes Spruce/Fir (93) with a dominant vegetation form of Northern Conifer Forest (22).[13] The plant hardiness zone is 3a with an average annual extreme minimum air temperature of −38.0 °F (−38.9 °C).[11] The spring bloom typically peaks around May 12 and fall color usually peaks around September 27.

Representation in other media