Northern Thailand is geographically characterised by several mountain ranges, which continue from the Shan Hills in bordering Myanmar to Laos, and the river valleys which cut through them. Though like most of Thailand, it has a tropical savanna climate, its relatively high elevation and latitude contribute to more pronounced seasonal temperature variation, with cooler winters than the other regions. Historically it is related to the Lanna Kingdom and its culture.

North Thailand is bound by the Salween River in the west and the Mekong in the east. The basins of rivers Ping, Wang, Yom, and Nan, all tributaries of the Chao Phraya River, in the central part run from north to south and are mostly very wide. The basins cut across the mountains of two great ranges, the Thanon Range in the western part and the Phi Pan Nam in the eastern. Their elevations are generally moderate, a little above 2,000 metres (6,562 ft) for the highest summits. Although formerly forested, many of these mountains are now denuded.[3]

Parallel mountain ranges extend from the Daen Lao Range (ทิวเขาแดนลาว), in the southern region of the Shan Hills, in a north-south direction, the Dawna Range (ทิวเขาดอยมอนกุจู) forming the western border of Thailand between Mae Hong Son and the Salween River.[4] To the east the Thanon Thong Chai Range (เทือกเขาถนนธงชัย), the Khun Tan Range (ทิวเขาขุนตาน), the Phi Pan Nam Range (ทิวเขาผีปันน้ำ), as well as the western part of the Luang Prabang Range (ทิวเขาหลวงพระบาง), form the natural region of the Thai highlands together with the former.[5]

These high mountains are incised by steep river valleys and upland areas that border the central plain. A series of rivers, including the Nan, Ping, Wang, Yom, and Nan, flow southwards through mountain valleys and join to form the Chao Phraya in Nakhon Sawan Province in the central region. Sirikit Dam is on the Nan River in Uttaradit Province. The northeastern part is drained by rivers flowing into the Mekong basin, like the Kok and Ing.

The four-region system includes the northern parts of the central plain as well as some mountainous areas bordering the western and the northeastern limits.

Northern Thailand according to the four-region grouping system

The northern region, as defined by the National Geographical Committee in 1978, consists of nine provinces. Geographically the division, in conformance with the six-region system, includes most of the mountainous natural region of the Thai highlands. 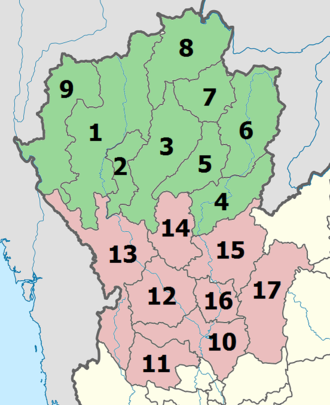