The regions of Taiwan are based on the historical administrative divisions. However, most of the definitions are not precise.

The most widely used definition is from the Council for Economic Planning and Development, Executive Yuan. This division into four regions (tetrachotomy) scheme corresponds to the prefectures under Qing Dynasty rule.

The scheme of division into five regions (pentachotomy) is a fusion of the tetrachotomy and hexachotomy scheme. Although no specific names are given in each division, it is the most commonly used scheme among the highest divisions of the central government. This scheme is used by the Joint Service Centers (JSC, 區域聯合服務中心) under Executive Yuan and the jurisdiction of High Court Branches (高等法院分院) under Judicial Yuan.[1] 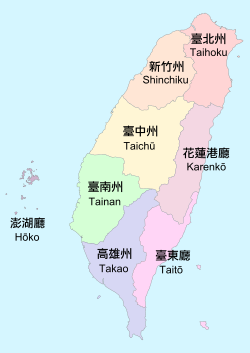 Political division of Taiwan in 1945

The division into six regions (hexachotomy) scheme corresponds to the prefectures under Japanese rule. This scheme was used for national electoral districts in the legislative elections in 1972, 1975, 1980, 1983, and 1986. The discussion of this scheme became popular after the elections of new five municipalities in 2010.[2]