Northern Nigeria was an autonomous division within Nigeria, distinctly different from the southern part of the country, with independent customs, foreign relations and security structures. In 1962 it acquired the territory of the British Northern Cameroons, which voted to become a province within Northern Nigeria.

In 1967, Northern Nigeria was divided into the North-Eastern State, North-Western State, Kano State, Kaduna State, Kwara State, and the Benue-Plateau State, each with its own Governor.[citation needed] 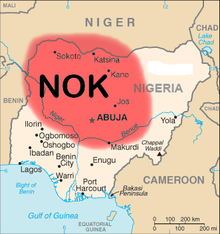 Area of the Nok culture

The Nok culture, an ancient culture dominated most of what is now Northern Nigeria in prehistoric times, its legacy in the form of terracotta statues and megaliths have been discovered in Sokoto, Kano, Birinin Kudu, Nok and Zaria. The Kwatarkwashi culture, a variant of the Nok culture centred mostly around Zamfara in Sokoto Province is thought by some to be the same or an offshoot of the Nok.[citation needed]

The Fourteen Kingdoms unified the diverse lore and heritage of Northern Nigeria into a cohesive ethno-historical system. Seven of these Kingdoms developed from the Kabara legacy of the Hausa people. In the 9th century as vibrant trading centers competing with Kanem-Bornu and Mali slowly developed in the Central Sudan, a collection of Kingdoms merged dominating the great savannah plains of Hausaland, their primary exports were leather, gold, cloth, salt, kola nuts, animal hides, and henna.[1]

Between 500 CE and 700 CE Hausa people, who are thought to have slowly moved from Nubia and mixing in with the local Northern and Middle Belt population, established a number of strong states in what is now Northern Nigeria and Eastern Niger. With the decline of the Nok and Sokoto, who had previously controlled Central and Northern Nigeria between 800 BCE and 200 CE, the Hausa were able to emerge as the new power in the region. They are closely linked with the Kanuri people of Kanem-Bornu (Lake Chad), the Birom, Gwari, Nupe and Jukun. The Hausa aristocracy, under influence from the Mali Empire adopted Islam in the 11th century CE. By the 12th century CE the Hausa were becoming one of Africa's major powers. The architecture of the Hausa is perhaps one of the least known but most beautiful of the medieval age. Many of their early mosques and palaces are bright and colourful and often include intricate engraving or elaborate symbols designed into the facade. By 1500 CE the Hausa utilized a modified Arabic script known as Ajami to record their own language; the Hausa compiled several written histories, the most popular being the Kano Chronicle.[2]

Usuman dan Fodio ,The 18th century revolutionary and a social, religious and political reformer finally united the 7 Hausa States with newly created provinces into the Sokoto Caliphate. The Sokoto Caliphate was under the overall authority of the Commander of the Faithful. Under Dan Fodio, the Empire was bicephalous and divided into two territories each controlled by an appointed vizier. Each of the territories was further divided into autonomous Emirates under mainly hereditary local Emirs. The Bornu Empire was initially absorbed into the Sokoto Caliphate of Usman dan Fodio, but broke away a few years later.[2]

Initially, the British involvement in Northern Nigeria was predominantly trade-related, and revolved around the expansion of the Royal Niger Company, whose interior territories spread north from about where the Niger River and Benue River joined at Lokoja the Mount Patti hill. The Royal Niger Company's territory did not represent a direct threat to much the Sokoto Caliphate or the numerous states of Northern Nigeria. This changed, when Frederick Lugard and Taubman Goldie laid down an ambitious plan to pacify the Niger interior and unite it with the rest of the British Empire.[citation needed]

History of the Protectorate of Northern Nigeria 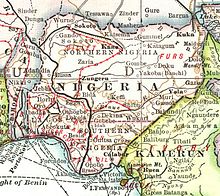 The protectorate of Northern Nigeria was proclaimed at Ida by Frederick Lugard on January 1, 1897. The basis of the protectorate was the 1885 Treaty of Berlin which broadly granted Northern Nigeria to the British sphere of influence, on the basis of their existing protectorates in Southern Nigeria. Hostilities with the powerful Sokoto Caliphate soon followed. the Emirates of Kotogora and Ilorin were the first to be conquered by the British. In February 1903, the great fort of Kano, seat of the Kano Emirate was captured, Sokoto and much of the rest of its Caliphate soon capitulated.[citation needed]

On March 13, 1903, the Grand Shura of Caliphate finally conceded to Lugard's demands and proclaimed Queen Victoria as suzerain of the Caliphate and all its lands.[citation needed]

Governor Lugard, with limited resources, controlled the region with the consent of local rulers through a policy of indirect rule, which he developed into a sophisticated political theory. The geographical area included in the Northern Nigeria Protectorate included the Okun-Yoruba land of Kabba, Ogidi, Ijumu, Gbede, Yagba, as well as, Ebira land, Igala land fashioned collectively under Kabba Province. The Ifelodun, Offa, Omuaran, Ifelodun and Irepodun areas, also Yorubas, were fashioned into Ilorin province. Lugard left the protectorate after some years, serving in Hong Kong, but was eventually returned to work in Nigeria, where in 1914 he sought the merger of the Northern Nigeria Protectorate with Southern Nigeria, creating the Colony and Protectorate of Nigeria.[citation needed]

Agitation for independence from the radically different Southern Protectorate, however, led to a formidable split in the 1940s. The Richards constitution proclaimed in 1945, gave overwhelming autonomy to the North, including eventually in the areas of foreign relations and customs policy.[citation needed]

In 1967, Northern Nigeria was disestablished by subdivision.

In 1967, the Federal Military Government of General Yakubu Gowon broke up the four regions that until then had constituted the Federation of Nigeria, creating twelve new states. Northern Nigeria was divided into the North-Eastern State, North-Western State, Kano State, Kaduna State, Kwara State, and the Benue-Plateau State, each with its own Governor and government.[citation needed]

The office of High Commissioner was first established on 1 January 1897, by letters patent from Queen Victoria. After the departure of the British in 1960, a Governor continued to be appointed until 1967 as representative of the new administration in Lagos.[citation needed]

The governor presided over all ceremonial functions and appointed the members of the nation's upper legislative house, the Northern Nigerian House of Chiefs.

President of the House of Chiefs

Speakers of the House of Assembly

The highest point in Northern Nigeria is Chappal Waddi at 2,419 m (7,936 ft). The main rivers are the Niger and the Benue River which converge at Kabba province from where it travels southwards ultimately emptying into the Atlantic Ocean.

The expansive valleys of the Niger and Benue River valleys dominate the southern areas of the region. To the southeast of the Benue river, hills and mountains which forms the Mambilla Plateau create the highest plateau in Northern Nigeria. This plateau extends to the border with Cameroon, this montane land forms part of the Bamenda Highlands in Cameroon.[citation needed]

The great savannah belt of the Great Plains of Hausaland dominates much of the rest of the province. this region experiences rainfall between 20 and 60 inches (508 and 1,524 mm) per year. The savannah zone's three categories are Guinean forest-savanna mosaic, Sudan savannah, and Sahel savannah.[citation needed] Guinean forest-savanna mosaic is plains of tall grass which are interrupted by trees. Sudan savannah is similar but with shorter grasses and shorter trees. Sahel savannah consists of patches of grass and sand, found in the northeast. In the Sahel region, rain is less than 20 inches (508 mm) per year and the Sahara Desert is encroaching. In the dry north-east corner of the country lies Lake Chad, which Northern Nigeria shares with Niger, Chad and Cameroon.[citation needed]

The South Western part of the region included Ogidi, Iyamoye, Iyara that have deep forests inter spacing the guinea savannah areas (and borders the forested areas of southern protectorate and as such shared similar rain patterns and given to the cultivation of cash crops such as coffee and cocoa).[citation needed]

Kano, the largest of the provinces in terms of population and economy, is in the North-Central part of the country. The Kano Native Authority, an offshoot of the fula Kano Emirate, inherited the ancient trade industries that fuelled the trans-Saharan trade with North Africa. The Province of Zaria is home to the City of Kaduna, an autonomous capital city that serves as the nation's capital and home to its national institutions.[citation needed]

Northern Nigeria though an ethnically and religiously diverse region, is an overwhelmingly majority Muslim region. The Hausa and Fulani dominate much of the North Western and eastern part of the Country. The Hausa , Fulani are chiefly Muslims.

The Nupes and the Kanuri are also chiefly Muslims . Small Christian populations also exist in the north, They were converted to Christianity after the colonisation of the country by the British.

Human rights concerns Attacks by Fulani tribesman on pastoral villages have resulted in the deaths of 6000 since 2015, according to the Barnabas Fund.[3] Fulani tribesmen have also had to endure merciless killings of them and their livestocks by christian farmers, they are aggressors on both side of this conflicts. [4]