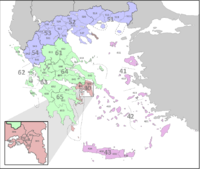 Northern Greece (Greek: Βόρεια Ελλάδα, romanized: Voreia Ellada) is used to refer to the northern parts of Greece, and can have various definitions.

The term may also, according to context, incorporate the region Epirus. When Epirus is included, it is broadly coterminous with the "New Lands" (Νέες Χώρες), i.e. the territories added to the Kingdom of Greece after the Balkan Wars of 1912–13, as opposed to pre-1912 "Old Greece" (Παλαιά Ελλάδα).[citation needed] This distinction survives in the ecclesiastical domain, where the dioceses of the "New Lands" de jure still adhere to the Patriarchate of Constantinople, but are de facto under the Church of Greece.

Voreia Ellada is also one of the four Greek NUTS regions, created for statistical purposes by the European Union. Until 2014, it encompassed the four administrative regions Eastern Macedonia and Thrace, Central Macedonia, West Macedonia and Thessaly. Coming into effect in January 2015, the Greek NUTS regions were redefined, with Voreia Ellada now encompassing Epirus instead of Thessaly.[2] This NUTS division is not used by Greece for any administrative purposes.

In linguistics, Northern Greece refers to the areas where the Northern Greek dialect is traditionally spoken, encompassing in addition to the previous regions Central Greece except for Attica, and the North Aegean, except Chios.[3]