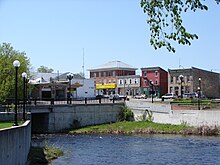 North Grenville is a township in eastern Ontario, Canada, in the United Counties of Leeds and Grenville on the Rideau River. It is located just south of Ottawa in Canada's National Capital Region.

It was established on January 1, 1998, through the amalgamation of Oxford-on-Rideau Township, South Gower Township, and the Town of Kemptville. In 2003, a motion of the municipal council adopted the designation of 'municipality'.

The largest community in North Grenville is Kemptville, with a population of 3,911 in the 2016 census, up from 3,620 in the Canada 2011 Census.[2][3] It is located on the Kemptville Creek (historically South Branch of the Rideau River) approximately 56 km (35 mi) south of Ottawa, sitting midway between suburban Ottawa and the Ogdensburg–Prescott International Bridge along Highway 416.