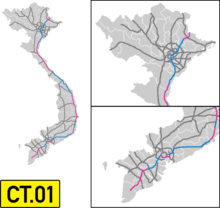 Map of the expressway
Blue: Operational
Pink: under construction/planned

Construction of the first section,[clarification needed] covering 98 km from Cam Lo to La Son, started in September 2019, with opening targeted for 2021.[5] The central section of the North-South Expressway will stretch 654 kilometers from Nam Dinh Province near Hanoi to Vinh Long Province and will cost an estimated VND118 trillion ($5.1 billion).

In 2020, Minister of Planning and Investment Nguyễn Chí Dũng petitioned to the National Assembly to switch development of the remaining sections of the North–South expressway to state funding instead of build-operate-transfer contracts, in order to avoid delays in raising capital and to reduce interest amount. If public funding would be approved, construction on the sections Vĩnh Hảo (vi) - Phan Thiet, Ninh Binh - Thanh Hoa and Phan Thiết - Dau Giay would start in 2021.[6]