The Norsemen (or Norse people) were a North Germanic ethnolinguistic group of the Early Middle Ages, during which they spoke the Old Norse language.[1][2][3][4] The language belongs to the North Germanic branch of the Indo-European languages and is the predecessor of the modern Germanic languages of Scandinavia.[4] During the late 8th century, Norsemen embarked on a large-scale expansion in all directions, giving rise to the Viking Age. In English-language scholarship since the 19th century, Norse seafaring traders, settlers and warriors have commonly been referred to as Vikings. The identity of Norsemen derived into their modern descendants,[5] the Danes, Icelanders,[a] Faroe Islanders,[a] Norwegians, and Swedes,[6] who are now generally referred to as 'Scandinavians' rather than Norsemen.[7]

The word Norseman first appears in English during the early 19th century: the earliest attestation given in the third edition of the Oxford English Dictionary is from Walter Scott's 1817 Harold the Dauntless. The word was coined using the adjective norse, which was borrowed into English from Dutch during the 16th century with the sense 'Norwegian', and which by Scott's time had acquired the sense "of or relating to Scandinavia or its language, esp[ecially] in ancient or medieval times".[8] As with modern use of the word viking, therefore, the word norseman has no particular basis in medieval usage.[9]

The term Norseman does echo terms meaning 'Northman', applied to Norse-speakers by the peoples they encountered during the Middle Ages.[10] The Old Frankish word Nortmann ("Northman") was Latinised as Normannus and was widely used in Latin texts. The Latin word Normannus then entered Old French as Normands. From this word came the name of the Normans and of Normandy, which was settled by Norsemen in the tenth century.[11][12]

The same word entered Hispanic languages and local varieties of Latin with forms beginning not only in n-, but in l-, such as lordomanni (apparently reflecting nasal dissimilation in local Romance languages).[13] This form may in turn have been borrowed into Arabic: the prominent early Arabic source al-Mas‘ūdī identified the 844 raiders on Seville not only as Rūs but also al-lawdh’āna.[14] 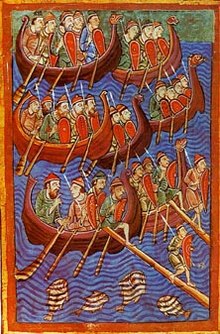 In modern scholarship, Vikings is a common term for attacking Norsemen, especially in connection with raids and monastic plundering by Norsemen in the British Isles, but it was not used in this sense at the time. In Old Norse and Old English, the word simply meant 'pirate'.[15][16][17]

The Norse were also known as Ascomanni, ashmen, by the Germans, Lochlanach (Norse) by the Gaels and Dene (Danes) by the Anglo-Saxons.[18]

The Gaelic terms Finn-Gall (Norwegian Viking or Norwegian), Dubh-Gall (Danish Viking or Danish) and Gall Goidel (foreign Gaelic) were used for the people of Norse descent in Ireland and Scotland, who assimilated into the Gaelic culture.[19] Dubliners called them Ostmen, or East-people, and the name Oxmanstown (an area in central Dublin; the name is still current) comes from one of their settlements; they were also known as Lochlannaigh, or Lake-people.

The Slavs, the Arabs and the Byzantines knew them as the Rus' or Rhōs (Ῥῶς), probably derived from various uses of rōþs-, i.e. "related to rowing", or from the area of Roslagen in east-central Sweden, where most of the Northmen who visited the Slavic lands originated. Archaeologists and historians of today believe that these Scandinavian settlements in the Slavic lands formed the names of the countries of Russia and Belarus.

The Slavs and the Byzantines also called them Varangians (Old Norse: Væringjar, meaning "sworn men"), and the Scandinavian bodyguards of the Byzantine emperors were known as the Varangian Guard.

In the Old Norse language, the term norrœnir menn (northern people) was used correspondingly to the modern English name Norsemen, referring to Swedes, Danes, Norwegians, Faroe Islanders, Icelanders, and others.

Modern Scandinavian languages have a common word for Norsemen: the word nordbo (Swedish: nordborna, Danish: nordboerne, Norwegian: nordboerne, or nordbuane in the definite plural) is used for both ancient and modern people living in the Nordic countries and speaking one of the Scandinavian Germanic languages. 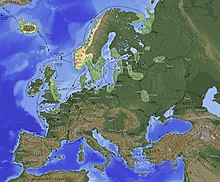 Exploration and expansion routes of Norsemen

The British conception of the Vikings' origins was inaccurate. Those who plundered Britain lived in what is today Denmark, Scania, the western coast of Sweden and Norway (up to almost the 70th parallel) and along the Swedish Baltic coast up to around the 60th latitude and Lake Mälaren. They also came from the island of Gotland, Sweden. The border between the Norsemen and more southerly Germanic tribes, the Danevirke, today is located about 50 kilometres (31 mi) south of the Danish–German border. The southernmost living Vikings lived no further north than Newcastle upon Tyne, and travelled to Britain more from the east than from the north.

The northern part of the Scandinavian Peninsula (with the exception of the Norwegian coast) was almost unpopulated by the Norse, because this ecology was inhabited by the Sami, the native people of northern Sweden and large areas of Norway, Finland, and the Kola Peninsula in today's Russia.[citation needed]

a Out of convenience, "Scandinavians" is commonly used as a synonym for "North Germanic peoples" even though Icelanders and Faroe Islanders do not inhabit Scandinavia today. The term is therefore given a cultural rather than geographical sense.