In November 2006 the Abuja Gateway Consortium signed a US$101.1 million contract for the management of the airport over the next 25 years. The contract included the construction of an airport hotel, private car parks, shopping malls, and a bonded warehouse, totalling US$50 million during its first five years, and additionally an upfront payment of US$10 million. According to the business plan, total investments would have amounted to US$371 million during the period of the contract. However, then-President Yar'Adua revoked the contract in April 2008.

On January 4, 2017, Nigeria's Federal Executive Council backed the Ministry of Aviation's decision to close the airport for six weeks to enable repairs on the runway, which was said to be dysfunctional. The Nigerian government also approved N1 billion for the conclusion of the Kaduna Airport terminal, which had been debated as an alternative for Abuja Airport.[9] Several airport users,[10] including the Nigerian Senate,[11] opposed the planned closure. It was believed that the closure of the airport would cause hardship for international and local air travellers alike.

Starting March 8, 2017, Nigeria declared the airport closed for at least six weeks to bring needed repairs to the runway.[12] On 18 April 2017, the airport was reopened following completion of this project.[13]

The Nigerian Civil Aviation Authority has its Abuja office on the airport grounds;[16] previously the airport had the authority's head office.[17] 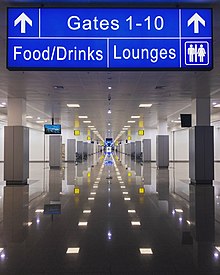 These data show number of passengers movements into the airport, according to the Federal Airports Authority of Nigeria's Aviation Sector Summary Reports.