Nipponzan-Myōhōji-Daisanga (日本山妙法寺大僧伽), often referred to as just Nipponzan Myohoji or the Japan Buddha Sangha, is a Japanese new religious movement and activist group founded in 1917 by Nichidatsu Fujii,[1] emerging from Nichiren Buddhism.[2] "Nipponzan Myōhōji is a small Nichiren Buddhist order of about 1500 persons, including both monastics and lay persons."[3][4] The community reveres the Lotus Sutra as the highest expression of the Buddhist message.

In addition, it is actively engaged worldwide in the peace movement.[5] It is the most pacifist group in Japan of seven religious movements surveyed by Robert Kisala.[6] The main practice of Nichiren Buddhism is to chant Namu Myōhō Renge Kyō. Nipponzan-Myōhōji monks, nuns and followers beat hand drums while chanting the Daimoku, and walk throughout the world promoting peace and non-violence. They try to explain the meaning of their ministry to all wishing to understand it.[7] 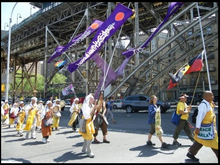 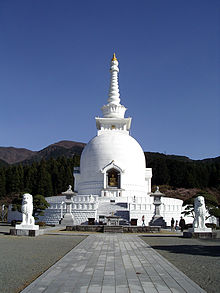 The most recognizable achievement of Nipponzan-Myōhōji is peace pagodas (stupas), that have been erected in various locations around the world, the first of which was inaugurated in 1954 at Kumamoto in Japan. Since then cities such as London,[8] New Delhi, Vienna, Comiso (in Italy) and Tokyo have all received peace pagodas.

It has also undertaken numerous peace pilgrimages made by its followers. One of the most prominent of these was the 1994–1995 pilgrimage from Auschwitz to Hiroshima by way of Bosnia, Iraq, Cambodia and other countries then experiencing the effects of war. That pilgrimage was known as The Interfaith Pilgrimage for Peace and Life. A more recent walk was the 2010 Walk for a Nuclear Free Future, a walk across the United States in support of a nuclear-free future.

Many[who?] argue that the order shows a certain political stance with its active opposition to the nuclear industry in Japan and U.S involvement in Okinawa. This has led to a difference in views with fellow Nichiren sect Soka Gakkai, who are often viewed as more conservative.[citation needed]