The Nippon Telegraph and Telephone Corporation (日本電信電話株式会社, Nippon Denshin Denwa Kabushiki-gaisha), commonly known as NTT, is a Japanese telecommunications company headquartered in Tokyo, Japan. Ranked 55th in Fortune Global 500, NTT is the fourth largest telecommunications company in the world in terms of revenue,[3] as well as the fifth largest publicly traded company in Japan after Toyota, Mitsubishi Corporation, Honda and Japan Post Holdings, as of September 2019.[4] 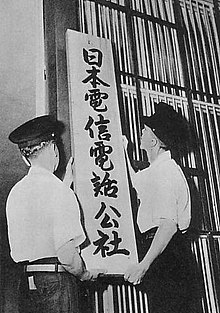 NTT was established as a government-owned corporation in 1952

NTT logo between 1952 and 1985. A highly modified version of this logo is still used by the Geospatial Information Authority of Japan to mark telecommunications structures on their maps

Established as a state monopoly in August 1952 to take over the Japanese telecommunications system operated by AT&T during the Occupation of Japan[citation needed], Nippon Telegraph and Telephone Public Corporation (日本電信電話公社, Nippon Denshin Denwa Kōsha, shortened into Den-Den Kōsha (電電公社)) was privatized in 1985 to encourage competition in the country's telecom market. In 1987, NTT made the largest stock offering to date, at US$36.8 billion.[7][8]

Because NTT owns most of Japan's last mile infrastructure (incl. FTTC or FTTB/FTTH), it enjoys oligopolistic control over land lines in Japan. In order to weaken NTT, the company was divided into a holding company (NTT) and three telecom companies (NTT East, NTT West, and NTT Communications) in 1999. The NTT Law regulating NTT East and West requires them to serve only short distance communications and obligates them to maintain telephone service all over the country. They are also obligated to lease their unused optical fiber (dark fiber) to other carriers at regulated rates. NTT Communications is not regulated by the NTT Law. 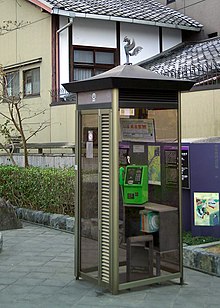