Nipah virus, scientific name Nipah henipavirus, is a bat-borne virus that is associated with a highly fatal infection. Numerous disease outbreaks caused by Nipah virus have occurred in South and Southeast Asia. Nipah virus belongs to the genus Henipavirus along with the Hendra virus, which has also caused disease outbreaks.

Ephrin B2 and B3 have been identified as the main receptor for Nipah virus.[1] Ephrin subtypes have a complex distribution of expression throughout the body, where the B3 is noted to have particularly high expression in some fore-brain subregions.[2]

Nipah virus has been isolated from Lyle's flying fox (Pteropus lylei) in Cambodia[4] and viral RNA found in urine and saliva from P. lylei and Horsfield's roundleaf bat (Hipposideros larvatus) in Thailand.[5] Infective virus has also been isolated from environmental samples of bat urine and partially eaten fruit in Malaysia.[6] Antibodies to henipaviruses have also been found in fruit bats in Madagascar (Pteropus rufus, Eidolon dupreanum)[7] and Ghana (Eidolon helvum)[8] indicating a wide geographic distribution of the viruses. No infection of humans or other species have been observed in Cambodia, Thailand or Africa as of May 2018. 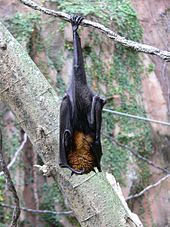 Pteropus vampyrus (large flying fox), one of the natural reservoirs of Nipah virus

The first cases of Nipah virus infection were identified in 1998, when an outbreak of neurological and respiratory disease on pig farms in peninsular Malaysia resulted in 265 human cases, including 105 human deaths.[9][10][11] The virus itself was isolated the following year in 1999.[12] This outbreak resulted in the culling of one million pigs. In Singapore, 11 cases, including one death, occurred in abattoir workers exposed to pigs imported from the affected Malaysian farms. The Nipah virus has been classified by the Centers for Disease Control and Prevention as a Category C agent.[13] The name "Nipah" refers to the place, Sungai Nipah in Port Dickson, Negeri Sembilan, the source of the human case from which Nipah virus was first isolated.[14][15] Nipah virus is one of several viruses identified by WHO as a likely cause of a future epidemic in a new plan developed after the Ebola epidemic for urgent research and development before and during an epidemic toward new diagnostic tests, vaccines and medicines.[16][17]

The outbreak was originally mistaken for Japanese encephalitis, but physicians in the area noted that persons who had been vaccinated against Japanese encephalitis were not protected in the epidemic, and the number of cases among adults was unusual.[18] Despite the fact that these observations were recorded in the first month of the outbreak, the Ministry of Health failed to react accordingly, and instead launched a nationwide campaign to educate people on the dangers of Japanese encephalitis and its vector, Culex mosquitoes.

Symptoms of infection from the Malaysian outbreak were primarily encephalitic in humans and respiratory in pigs. Later outbreaks have caused respiratory illness in humans, increasing the likelihood of human-to-human transmission and indicating the existence of more dangerous strains of the virus.

Based on seroprevalence data and virus isolations, the primary reservoir for Nipah virus was identified as Pteropid fruit bats, including Pteropus vampyrus (large flying fox), and Pteropus hypomelanus (small flying fox), both of which occur in Malaysia.

The transmission of Nipah virus from flying foxes to pigs is thought to be due to an increasing overlap between bat habitats and piggeries in peninsular Malaysia. At the index farm, fruit orchards were in close proximity to the piggery, allowing the spillage of urine, faeces and partially eaten fruit onto the pigs.[19] Retrospective studies demonstrate that viral spillover into pigs may have been occurring in Malaysia since 1996 without detection.[9] During 1998, viral spread was aided by the transfer of infected pigs to other farms, where new outbreaks occurred. 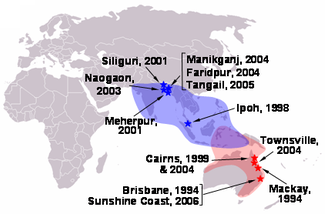 Nipah virus outbreaks have been reported in Malaysia, Singapore, Bangladesh and India. The highest mortality due to Nipah virus infection has occurred in Bangladesh. In Bangladesh, the outbreaks are typically seen in winter season.[20] Nipah virus first appeared in Malaysia in 1998 in peninsular Malaysia in pigs and pig farmers. By mid-1999, more than 265 human cases of encephalitis, including 105 deaths, had been reported in Malaysia, and 11 cases of either encephalitis or respiratory illness with one fatality were reported in Singapore.[21] In 2001, Nipah virus was reported from Meherpur District, Bangladesh[22][23] and Siliguri, India.[22] The outbreak again appeared in 2003, 2004 and 2005 in Naogaon District, Manikganj District, Rajbari District, Faridpur District and Tangail District.[23] In Bangladesh, there were also outbreaks in subsequent years.[24][25]