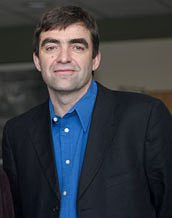 Nino Pio Ricci (born 1959) is a Canadian novelist who lives in Toronto, Ontario.[1] He was born in Leamington, Ontario to Italian immigrants, Virginio and Amelia Ricci, from the province of Isernia, Molise.

Ricci's first novel Lives of the Saints was a critical and commercial success. It won the Books in Canada First Novel Award, the 1990 Governor General's Award for Fiction and a Betty Trask Award. It forms a trilogy with Ricci's next two novels, In a Glass House (1993) and Where She Has Gone (1997).

The Independent review of In A Glass House includes this judgement: "THIS is the second part in Nino Ricci's trilogy of Italian immigrant life in Canada. The narrator and central character, Vittorio Innocente, traces his life onwards from the age of seven; his mother has just died in childbirth, and he arrives to join his morbid father on a tomato farm in Ontario. Inside the farm's glass houses the crop ripens year by year, but for Vittorio, exposed as he is both before his violent family, and by them, each tiny step in growing up is an agony."

The Publishers Weekly review of Where She Has Gone asserts that, "Ricci's poetic prose and fluid plot create a tense and beautiful story whose sad ironies achieve resolution in a haunting conclusion."

The Quill & Quire review of Testament reads, in part, "Testament looks at Jesus Christ from four viewpoints, switching from Judas Iscariot (here called Yihuda of Qiryat) to the Marys (Miryam of Migdal and Miryam, the mother of Jesus), and finally to Simon of Gergesa. It is no pamphlet pushing Scripture Lite."

Ricci served as one of the directors of PEN Canada from 1990–96, and as president during 1995-96. He was the writer-in-residence at the University of Windsor for the 2005-06 academic year.