listen); 25 November [O.S. 13 November] 1887 – 26 January 1943) was a prominent Russian and Soviet agronomist, botanist and geneticist best known for having identified the centers of origin of cultivated plants. He devoted his life to the study and improvement of wheat, corn, and other cereal crops that sustain the global population.[4][5][6][7][8] Vavilov's work was criticized by Trofim Lysenko, whose anti-Mendelian concepts of plant biology had won favor with Joseph Stalin. As a result, Vavilov was arrested and subsequently sentenced to death in July 1941. Although his sentence was commuted to twenty years' imprisonment, he died in prison in 1943. In 1955 his death sentence was retroactively pardoned under Nikita Khrushchev. By the 1960s his reputation was publicly rehabilitated and he began to be hailed as a hero of Soviet science. 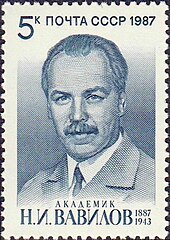 Vavilov on a 1987 Soviet stamp

Vavilov was born into a merchant family in Moscow, the older brother of renowned physicist Sergey Ivanovich Vavilov. "The son of a Moscow merchant who'd grown up in a poor rural village plagued by recurring crop failures and food rationing, Vavilov was obsessed from an early age with ending famine in both his native Russia and the world."[9]

He graduated from the Moscow Agricultural Institute in 1910 with a dissertation on snails as pests. From 1911 to 1912, he worked at the Bureau for Applied Botany and at the Bureau of Mycology and Phytopathology. From 1913 to 1914 he travelled in Europe and studied plant immunity, in collaboration with the British biologist William Bateson, who helped establish the science of genetics.[1]

From 1924 to 1935 he was the director of the Lenin All-Union Academy of Agricultural Sciences at Leningrad. Impressed with the work of Canadian phytopathologist Margaret Newton on wheat stem rust, in 1930 he attempted to hire her to work at the institute,[11] offering a good salary and perks such as a camel caravan for her travel. She declined, but visited the institute in 1933 for three months to train 50 students in her research.

Vavilov's first marriage ended in divorce in 1926, after which he married geneticist Elena Ivanovna Barulina, a specialist on lentils and assistant head of the institute's seed collection. Their son Yuri was born in 1928.[10]

While developing his theory on the centers of origin of cultivated plants, Vavilov organized a series of botanical-agronomic expeditions, and collected seeds from every corner of the globe. In Leningrad, he created the world's largest collection of plant seeds.[12] Vavilov also formulated the law of homologous series in variation.[13] He was a member of the USSR Central Executive Committee, President of All-Union Geographical Society and a recipient of the Lenin Prize.

In 1932, during the sixth congress, Vavilov proposed holding the seventh International Congress of Genetics in the USSR. After some initial resistance by the organizing committee, in 1935 it agreed to hold the seventh congress in Moscow in 1937. The Presidium of the USSR Academy of Sciences decided to support the idea and asked the Communist Party for its approval, which it gave on 31 July 1935. Vavilov was elected chairman of the International Congress of Genetics. However, on Nov 14 1936 the Politburo decided to cancel the congress. The seventh International Congress of Genetics was postponed until 1939 and took place in Edinburgh instead. The Politburo had decided to forbid Vavilov from travelling abroad and during the Congress's opening ceremony an empty chair was placed on the stage as a symbolic reminder of Vavilov's involuntary absence.[14] 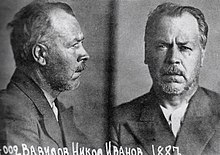 Vavilov encountered the young Trofim Lysenko and at the time encouraged him in his work. At the time Lysenko was not the best at growing wheat and peas, but Vavilov continued to support him and his ideas. It was not until later when he was under pressure from the Soviet State that Vavilov began to criticize the non-Mendelian concepts of Lysenko, who won the support of Joseph Stalin. As a result, Vavilov was arrested on 6 August 1940, while on an expedition to Ukraine. He was sentenced to death in July 1941. In 1942 his sentence was commuted to twenty years imprisonment. In 1943, he died in prison under unclear circumstances, but obviously in connection with the harsh prison conditions. The prison's medical documentation indicates that he had been admitted into the prison hospital a few days prior to his death and mention the diagnoses of lung inflammation, dystrophy and edema as well as general weakness as a complaint, but as for the immediate cause of death, the death certificate only mentions 'decline of cardiac activity'.[15][16] Some authors assert that the actual cause of death was starvation.[17][18]

The Leningrad seedbank was diligently preserved and protected through the 28-month long Siege of Leningrad. While the Soviets had ordered the evacuation of art from the Hermitage, they had not evacuated the 250,000 samples of seeds, roots, and fruits stored in what was then the world's largest seedbank. A group of scientists at the Vavilov Institute boxed up a cross section of seeds, moved them to the basement, and took shifts protecting them. Those guarding the seedbank refused to eat its contents, even though by the end of the siege in the spring of 1944, nine of them had died of starvation.[9]

In 1943, parts of Vavilov's collection, samples stored within the territories occupied by the German armies, mainly in Ukraine and Crimea, were seized by a German unit headed by Heinz Brücher. Many of the samples were transferred to the SS Institute for Plant Genetics, which had been established at Schloss Lannach [de] near Graz, Austria.[19]

The Royal Society of Edinburgh mentions Vavilov in the list of its former fellows, indicating that he died in a Soviet workcamp in Siberia on 26 January 1943.[20] However, he actually died in a Soviet prison in Saratov.[15] Today a street in downtown Saratov bears the name of Vavilov (unlike the street of the same name in Moscow, which is named after his brother). Vavilov's monument in Saratov near the end of the Vavilov street was unveiled in 1997. The square near the monument is a usual place for opposition rallies.[21][22][23][24][25] Another monument of him (actually, a cenotaph) is located near the entrance to the Resurrection cemetery in Saratov, where Vavilov is buried.

Vavilov was an atheist.[10]

In 1955, Vavilov's life sentence was pardoned at a hearing of the Military Collegium of the Supreme Court of the Soviet Union, undertaken as part of a de-Stalinization effort to review Stalin-era death sentences.[26] By the 1960s his reputation was publicly rehabilitated and he began to be hailed as a hero of Soviet science.[27]

Today, the N.I. Vavilov Institute of Plant Industry in St. Petersburg still maintains one of the world's largest collections of plant genetic material.[28] The Institute began as the Bureau of Applied Botany in 1894, and was reorganized in 1924 into the All-Union Research Institute of Applied Botany and New Crops, and in 1930 into the Research Institute of Plant Industry. Vavilov was the head of the institute from 1921 to 1940. In 1968 the institute was renamed after Vavilov in time for its 75th anniversary.

A minor planet, 2862 Vavilov, discovered in 1977 by Soviet astronomer Nikolai Stepanovich Chernykh is named after him and his brother Sergey Ivanovich Vavilov.[29] The crater Vavilov on the far side of the Moon is also named after him and his brother. The story of the researchers at the Vavilov Institute during the Siege of Leningrad was fictionalized by novelist Elise Blackwell in her 2003 novel Hunger. That novel was the inspiration for the Decemberists' song "When The War Came" in the 2006 album The Crane Wife, which also depicts the Institute during the siege and mentions Vavilov by name.

In 2020, Cosmos: Possible Worlds featured an episode which dives deep into the life of Vavilov.

The standard author abbreviation Vavilov is used to indicate this person as the author when citing a botanical name.[30]