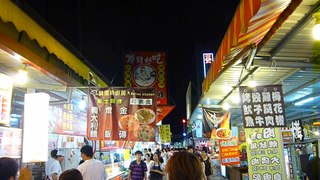 Night markets or night bazaars are street markets which operate at night and are generally dedicated to more leisurely strolling, shopping, and eating than more businesslike day markets. They are typically open-air markets.

The concept of the night market traces its roots back to the medieval Chinese Tang dynasty. The Tang government put strict sanctions on night markets and their operations in A.D. 836. Towards the end of the Tang Dynasty, economic expansion led to less state regulation and restrictions being lifted on night markets. During the Song Dynasty (960-1279), night markets played a central role in Chinese nightlife. These markets were found in corners of large cities. Some stayed open for twenty- four hours. Song period night markets are also known to have included restaurants and brothels due to being frequently located near business districts and red light districts.[1]

In Taiwan, in the 1950s and 1960s, migrant urban workers made up a large base of night markets' customers. The vendors created simplified versions of banquet dishes and served xiaochi foods. The names of the towns came from the dishes they served. The serving of xiaochi foods attracted Taiwan's local elite. Stories were formed of how well-known politicians and intellectuals visited Night Market stalls.[2]

Night markets started to embody the local and the global modern popular culture because of commercial industries. Because of the global recession in the 1970s, canceled imports created more opportunities for vendors selling light industry and family made goods. This was due to more products becoming available to local markets. Night marketing networks were formed and sold Taiwan's light industry goods.[3]

Because of the prosperity of the night markets, some traditional businesses were replaced by higher quality garment and shoe stores in the 1980s. The energetic night markets were known during this period where neon signs, loud music and light displays were used to attract customers. The new replaced the old; cafeterias instead of restaurants, gift shops instead of sundry shops, sportswear outlets instead of low quality garment stores. At Taiwan's stock market surge, chains started opening franchises that were located in or near the night markets. These included fast food outlets such as McDonald's and convenience stores such as 7-Elevens, which were then followed by garment stores. This transformation continued in the 1990s, when chains who sold higher grade merchandise replaced individually owned businesses.[3]

Night Markets changed from places that sold traditional snack food and handicrafts to modern centers of popular culture. Markets rapidly responded to new trends by producing their own versions of popular goods, especially in the 1990s, when copyright and intellectual property laws were only loosely enforced. These counterfeit items that now flooded the market attracted young customers. In recent years, these laws are now more strictly enforced so counterfeit items are usually found in traveling night markets. The night markets are now known for not personifying Taiwan as it once did. The night market was transformed to accommodate to the modern capitalist economies of present day.[4] 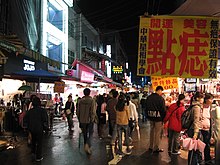 Taiwan hosts numerous night markets in each of its major cities. The larger and more formal of these markets might take place in purpose-built marketplaces while smaller or more informal ones tend to occupy streets or roads that are normal thoroughfares by day. The temporal night markets (ones that are not housed in any permanent structure) are actually consistent in their location; in most large cities, they are on a smaller street parallel and close (a block or two away) to the primary street of that city. Though the temporal night market stalls appear at night and then vanish by day, the vendors usually return to the same location the next evening. Night markets do not close, but the individual stalls may randomly take days off due to holidays, family illness, etc. Most temporal stalls within a night market have white canvas tops and bright lights. This gives the temporary night markets a fantastical, carnival-like atmosphere.

When a new night market street develops, the initial response is not always positive - they are thought to be noisy and the customers often leave trash behind that the owners of the daytime stores must deal with. As the night market becomes more well known, however, often it is looked upon more positively and the daytime stores adjust. The daytime stores then stay open later, because there are now customers at night when previously there wouldn't be. Night markets can increase profitability and often bring secondary type of consumers that are different from the daytime consumers. For example, a daytime store may normally sell herbs. At night, that same daytime store may now change its wares to include iced grass jelly and honey tea; this second item caters towards the teenage and early-twenties crowd, which is the majority of night market customers. Although some of these markets are specialized (e.g., in certain types of food), most have a mixture of individual stalls hawking clothing, consumer goods, xiaochi (snacks or fast food), and specialty drinks. The atmosphere is usually crowded and noisy with hawkers shouting and fast-paced music playing over loudspeakers. Some individual vendors may take advantage of the informality of the market to offer counterfeit, pirated or grey market consumer goods. The night markets usually open around 6pm, and are busy until past midnight.

Major night markets often have agreements and contracts where the vendors pitch in for utilities such as electricity and water hook-up. A few (such as Shilin Night Market) actually include the cost of basic cleaning in this price. There is also a greater police presence at major night markets, compared to the temporary night markets. 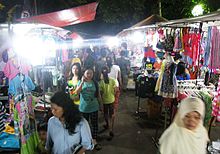 Night markets are commonly known as Pasar Malam by the locals, which literally means night market, "pasar" being related to "bazaar" in Persian or also the meaning "market" in Malay/Indonesian, and "malam" meaning "night". A pasar malam is a street market in Indonesia, Malaysia and Singapore that opens in the evening, usually in residential neighbourhoods.

It brings together a collection of stalls that usually sell goods such as fruit, vegetables, snacks, toys, clothes, movie discs and ornaments at cheap or at least reasonable prices. A pasar malam often takes place only one to a few days of the week, as the traders rotate around different neighbourhoods on different days of the week. Haggling over prices is a common practice at such markets.

Today, several kecamatan (district) in Jakarta and also other provinces in Indonesia, hold weekly pasar malam, usually held every Saturday night in nearby alun-alun square, open fields or marketplaces. In Indonesia, pasar malam has become a weekly recreational place for local families. Other than selling variety of goods and foods, some pasar malam also offer kiddy rides and carnival games, such as mini carousel or mini train ride. 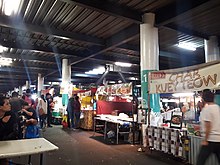 Night markets are popular in Auckland,[5] the biggest city in New Zealand, Wellington,[6] the capital city of New Zealand, as well as in small regional cities and towns like Hamilton[7] and Waitara.[8] The first night market in Auckland was opened in 2010 in Pakuranga.[9] By 2019, night markets can be found in Auckland seven nights a week. Typically, night markets in Auckland are being held in shopping mall carparks.[10] They offer food from Asia, Europe, as well as Māori and Pacific cuisines.[11] There are also specialist pop-up night markets that serve one kind of food (such as noodles).[12][13] In 2019, food delivery services from Auckland night markets were also introduced.[14]

Night markets are also hosted in various areas of North America, particularly with large Overseas Chinese communities in the Pacific Northwest and the West Coast, with Taiwanese-American student organizations hosting annual night market events to emulate the jovial atmosphere and celebrate the unique culture of night markets. In San Francisco's Chinatown, a large night market with almost 100 booths takes place every autumn Saturday in Portsmouth Square. In Chinatown in Vancouver, British Columbia, large night markets take place every Friday, Saturday, and Sunday from May to September, as well as in an industrial area near suburban Richmond, BC's Golden Village; the Richmond Night Market features more than 400 booths and attracts in excess of 30,000 people per night (total attendance in 2005 was almost two million). Night It Up! (formerly Toronto Night Market and Asian Night Market), has been and continues to be Power Unit Youth Organization's flagship project, attracting hundreds of thousands to a three-day celebration of Asian food and culture in Markham, Ontario (attendance was over 130,000 in 2017). The 626 Night Market, held at Santa Anita Park in Arcadia, California, a suburb of Los Angeles, is stated to be the largest Asian night market in the United States.[15] The Food Trust in Philadelphia operates a unique variant of a night market, with it being a temporary event only active for one night before moving somewhere else in the city; the market has thus far been held in East Passyunk, South Street, Northern Liberties, Mount Airy, Old City, Chinatown, and other places across the city.[16] The Queens Night Market is held in Flushing Meadows Corona Park in New York City on Saturdays from April to October. It hosts as many as 100 vendors.[17][18][19]