The Nguni languages are a group of Bantu languages spoken in southern Africa by the Nguni peoples. Nguni languages include Xhosa, Zulu, Ndebele (sometimes referred to as "Northern Ndebele"), Swati, Hlubi, Phuthi, Bhaca, Lala, Nhlangwini, Southern Transvaal Ndebele, and Sumayela Ndebele. The appellation "Nguni" derives from the Nguni cattle type. Ngoni (see below) is an older, or a shifted, variant.

It is sometimes argued that use of Nguni as a generic label suggests a historical monolithic unity of the peoples in question, where in fact the situation may have been more complex.[2] The linguistic use of the label (referring to a subgrouping of Bantu) is relatively stable. 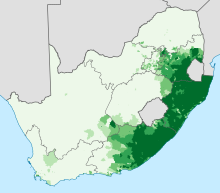 Proportion of the population that speaks a Nguni language at home in South Africa, not showing the areas in Zimbabwe. 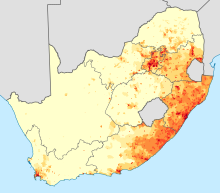 Within a subset of Southern Bantu, the label "Nguni" is used both genetically (in the linguistic sense) and typologically (quite apart from any historical significance).

In scholarly literature on southern African languages, the linguistic classificatory category "Nguni" is traditionally considered to subsume two subgroups: "Zunda Nguni" and "Tekela Nguni."[5][6] This division is based principally on the salient phonological distinction between corresponding coronal consonants: Zunda /z/ and Tekela /t/ (thus the native form of the name Swati and the better-known Zulu form Swazi), but there is a host of additional linguistic variables that enables a relatively straightforward division into these two substreams of Nguni.

The following aspects of Nguni languages are typical: