The New Zealand Government (Māori: Te Kāwanatanga o Aotearoa) is the central government through which governing authority is exercised in New Zealand. As in most parliamentary democracies, the term "Government" refers chiefly to the executive branch, and more specifically to the collective ministry directing the executive.[9] Based on the principle of responsible government, it operates within the framework that "the Queen reigns, but the government rules, so long as it has the support of the House of Representatives".[10] The Cabinet Manual describes the main laws, rules and conventions affecting the conduct and operation of the Government.

Executive power is exercised by ministers, all of whom are sworn into the Executive Council and accountable to the elected legislature, the House of Representatives.[11] Several senior ministers (usually 20) constitute a collective decision-making body known as the Cabinet, which is led by the prime minister (currently Jacinda Ardern).[12] A few more ministers (usually junior or supporting) are part of the Executive Council but are outside Cabinet. Most ministers have a portfolio of specific responsibilities such as departments or policy areas, although ministers without portfolio can be appointed.

The position of prime minister belongs to the person who commands the confidence of the majority of members in the House of Representatives. The position is determined also by several other factors, such as support agreements between parties and internal leadership votes in the party that leads the Government. The prime minister and other ministers are formally appointed by the governor-general (who is the Queen's representative in New Zealand).[11] By convention, the governor-general acts on the advice of the prime minister in appointing ministers. 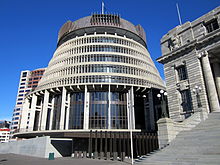 The Beehive, Wellington, is the seat of government (the executive branch)

In New Zealand, the term Government can have a number of different meanings. At its widest, it can refer collectively to the three traditional branches of government—the executive branch, legislative branch (the Queen-in-Parliament and House of Representatives) and judicial branch (the Supreme Court and subordinate courts).[13] Each branch operates independently of the others in an arrangement described as "separation of powers".[14]

More commonly, the term is used to refer specifically to the executive branch.[14] The largest party or coalition in the House of Representatives, with a sufficient number of MPs to win crucial parliamentary votes, will form a Cabinet—this is the sense intended when it is said that a political party "forms the government".[15][16] The Constitution Act 1986, the principal part of New Zealand's constitution, locates the executive government in the Executive Council,[11] which also includes ministers outside Cabinet.[17]

The Executive Wing of Parliament Buildings, commonly called the "Beehive" because of the building's shape, houses many government offices and is also where the Cabinet meets.[18] Thus the name Beehive is sometimes used metonymically to refer to the New Zealand Government.[19] The official website of the New Zealand Government uses the web address beehive.govt.nz.[20]

New Zealand was granted colonial self-government in 1853 following the New Zealand Constitution Act 1852, which was an Act of the Parliament of the United Kingdom. Governments were set up at both central and provincial level, with initially six provinces.[21] The provinces were abolished by the Abolition of Provinces Act 1876, during the premiership of Harry Atkinson. For the purposes of the Act, the provinces formally ceased to exist on 1 January 1877.[22]

The Sewell Ministry constituted the first responsible government, with control over all domestic matters other than native policy.[21] Formed in 1856, it lasted from 18 April to 20 May. From 7 May onward, Henry Sewell was titled "Colonial Secretary", and is generally regarded as having been the country's first prime minister.[23] The first ministry that formed along party lines did not appear until 1891, when John Ballance formed the Liberal Party and the Liberal Government.[24][25] The prime minister became the leader and public face of the governing party.[26] The status of the monarch's representative was upgraded from governor to "Governor-General" in 1917 letters patent.[21][27]

Government and the Crown

Further information: Monarchy of New Zealand and The Crown 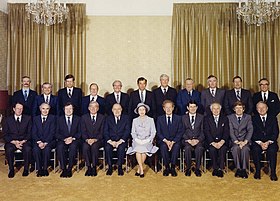 Elizabeth II and her New Zealand Cabinet, photographed during the Queen's 1981 tour of the country

The New Zealand Government is formally termed Her Majesty's Government on the Seal of New Zealand.[28] This is a reference to the monarch, currently Queen Elizabeth II, who is identified as the head of state in the Constitution Act 1986.[11] The legal authority of the state that is vested in the monarch, known as "the Crown", remains the source of the executive power exercised by the Government.[14][29] Sovereignty in New Zealand has never rested solely with the monarch due to the English Bill of Rights 1689, later inherited by New Zealand, which establishes the principle of parliamentary sovereignty.[30] Nonetheless, the Constitution Act describes the monarch as the "Sovereign".[11]

In many areas the Crown possesses a body of powers known as the royal prerogative.[31][32] For example, the Royal Assent (the monarch's approval)[33] is required to enact laws and the royal sign-manual gives authority to letters patent and orders in council.[34][35] The royal prerogative also includes summoning and dissolving the Parliament in order to call an election,[36] and extends to foreign affairs: the negotiation and ratification of treaties, alliances, international agreements, the right to declare war and peace, and the deployment and armament of defence forces.[37][38]

The Queen rarely personally exercises her executive powers; since the sovereign does not normally reside in New Zealand, she appoints a governor-general to represent her and exercise most of her powers.[39] The person who fills this role is selected on the advice of the prime minister.[39] "Advice" in this sense is a choice generally without options since it would be highly unconventional for the prime minister's advice to be overlooked—a convention that protects the monarchy. As long as the monarch is following the advice of her ministers, she is not held personally responsible for the decisions of the Government. The governor-general has no official term limit, and is said to serve "at Her Majesty's pleasure".[40]

As per the conventional stipulations of constitutional monarchy, the Queen and her representative rarely intervene directly in political affairs.[39] Just as the sovereign's choice of governor-general is on the prime minister's advice, the governor-general exercises the executive powers of state on the advice of ministers.[11] For example, the governor-general's power to withhold the Royal Assent to Bills has been rendered ineffective by convention.[36]

Chart showing the relationship between the executive Government and the Parliament. All ministers are MPs.

Under the conventions of the Westminster system, the Government is responsible to the House of Representatives, the democratically elected component of Parliament, rather than to the sovereign. This is called responsible government.[13][14] For example, ministers make statements in the House and take questions from other members of the House.[41] The Government is required by convention and for practical reasons to maintain the support, or confidence, of the House of Representatives. It also requires the support of the House for the maintenance of supply (by voting through the government's budgets) and in order to pass primary legislation.[42][43] By convention, if a government loses the confidence of the House then it must either resign or a general election is held.[14][44] Not since 1928 has a government been defeated on a confidence vote and therefore been obliged to resign.[45]

Upon the dissolution of Parliament, which must occur at least every three years, ministers are no longer members of the House of Representatives; however, they can remain members of the Executive Council for up to thirty days after leaving the House.[11]

Also known as "ministers of the Crown", these are members of Parliament who hold ministerial warrants from the Crown to perform certain functions of government. This includes formulating and implementing policies and advising the governor-general.[46] Before 1996 nearly all ministers were members of the Cabinet, but since the introduction of proportional representation, which has led to complex governing arrangements, there are currently three categories of minister: ministers in Cabinet, ministers outside Cabinet, and ministers from supporting parties.[47] 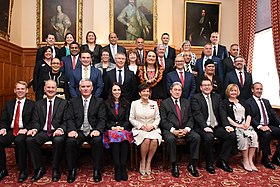 The ministers of the Sixth Labour Government, with Governor-General Dame Patsy Reddy, 26 October 2017

Cabinet (Māori: Te Rūnanga) is the senior collective decision-making body of the Government.[51][52] Constitutional law, such as the Constitution Act 1986, does not recognise the Cabinet as a legal entity; it exists solely by constitutional convention.[53] Its decisions do not in and of themselves have legal force. However, it serves as the practical expression of the Executive Council, which is New Zealand's highest formal governmental body.[46]

The prime minister is responsible for chairing meetings of Cabinet.[26] The governor-general will appoint as prime minister the person most likely to receive the confidence of the House of Representatives to lead the Government. In practice, the appointment is determined by size of each political party, support agreements between parties, and leadership votes in the party that leads the Government.[26][54]

Other ministers are appointed by the governor-general on the advice of the prime minister. Each minister is responsible for the general administration of at least one portfolio, and heads a corresponding public service department (see § Departments).[52][55] The most important minister, following the prime minister, is the finance minister, while other high-profile portfolios include foreign affairs, justice, health and education.

Since the introduction of the mixed-member proportional electoral system in 1993[57] governments have been formed following agreements between a large party and smaller support parties. Government ministers from the support parties are often ministers outside Cabinet. Processes were developed to allow the parties to "agree to disagree" on some issues.[58] Ministers outside the Cabinet have the same overall duties and responsibilities as their senior colleagues inside Cabinet.[52][12]

Departments and other public sector organisations

New Zealand's "public service" includes 32 core government institutions—most have ministry or department in their name, e.g. Ministry for Culture and Heritage, or Department of Internal Affairs—which are listed in the first schedule to the State Sector Act 1988.[59][60] Staffed by around 45,000 public servants,[61] they provide the government of the day with advice and deliver services to the public. Since the 1980s, the public service has been marketised.[62] Each department is headed by a chief executive who answers to a government minister for that department's performance. In turn, a minister is accountable to the House of Representatives for all actions of the departments he or she is responsible for.[60] This is called individual ministerial responsibility.[47]

The wider state sector[59] also includes about 2,800 Crown entities (including some 2,600 school boards of trustees and 20 district health boards), 17 state-owned enterprises, three officers of Parliament and the Reserve Bank of New Zealand.[63]

There are two main tiers of elected local authorities—regional councils and territorial authorities—in some places merged into unitary authorities. While the central government deals with issues relevant to New Zealand and its people as a nation, local government exists "to enable democratic local decision-making and action by, and on behalf of, communities", and "to meet the current and future needs of communities for good-quality local infrastructure, local public services, and performance of regulatory functions in a way that is most cost-effective for households and businesses."[64]

By convention, a distinct government is named for the largest party that leads it.[66][67][68]

The current government, since October 2017, is a coalition between the Labour and New Zealand First parties, led by Prime Minister Jacinda Ardern. A minority government, the coalition is reliant on the support of the Green Party in order to command a majority in the House of Representatives through a confidence-and-supply agreement.[68][69]