Infinite Construction - STEAM
Not to be confused with Neutral Nation. 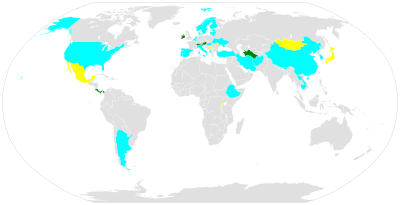 A neutral country is a state that is neutral towards belligerents in a specific war or holds itself as permanently neutral in all future conflicts (including avoiding entering into military alliances such as NATO). As a type of non-combatant status, neutral nationals enjoy protection under the law of war from belligerent actions to a greater extent than other non-combatants such as enemy civilians and prisoners of war.

Different countries interpret their neutrality differently.[1] Some, such as Costa Rica, have demilitarized; whereas Switzerland holds to "armed neutrality" in which it deters aggression with a sizeable military while barring itself from foreign deployment. Not all neutral countries avoid any foreign deployment or alliances, however, as Austria, Ireland, Finland and Sweden have active UN peacekeeping forces and a political alliance within the European Union. The traditional Swedish policy is not to participate in military alliances, with the intention of staying neutral in the case of war. Immediately before World War II, the Nordic countries stated their neutrality, but Sweden changed its position to that of non-belligerent at the start of the Winter War. There have been considerable changes to the interpretation of neutral conduct over the past centuries.[2] During the Cold War another European country, Yugoslavia, claimed military and ideological neutrality, and that is continued by its successor, Serbia.[3]

Rights and responsibilities of a neutral power

Belligerents may not invade neutral territory,[7] and a neutral power's resisting any such attempt does not compromise its neutrality.[8]

A neutral power must intern belligerent troops who reach its territory,[9] but not escaped prisoners of war.[10] Belligerent armies may not recruit neutral citizens,[11] but they may go abroad to enlist.[12] Belligerent armies' personnel and materiel may not be transported across neutral territory,[13] but the wounded may be.[14] A neutral power may supply communication facilities to belligerents,[15] but not war materiel,[16] although it need not prevent export of such materiel.[17]

Belligerent naval vessels may use neutral ports for a maximum of 24 hours, though neutrals may impose different restrictions.[18] Exceptions are to make repairs—only the minimum necessary to put back to sea[19]—or if an opposing belligerent's vessel is already in port, in which case it must have a 24-hour head start.[20] A prize ship captured by a belligerent in the territorial waters of a neutral power must be surrendered by the belligerent to the neutral, which must intern its crew.[21]

Neutrality has been recognised in different ways, and sometimes involves a formal guarantor. For example, Austria has its neutrality guaranteed by its four former occupying powers, Switzerland by the signatories of the Congress of Vienna and Finland by the Soviet Union during the Cold War. The form of recognition varies, often by bilateral treaty (Finland), multilateral treaty (Austria) or a UN declaration (Turkmenistan). These treaties can in some ways be forced on a country (Austria's neutrality was insisted upon by the Soviet Union) but in other cases it is an active policy of the country concerned to respond to a geopolitical situation (Ireland in the Second World War).[22]

For the country concerned, the policy is usually codified beyond the treaty itself. Austria and Japan codify their neutrality in their constitutions, but they do so with different levels of detail. Some details of neutrality are left to be interpreted by the government while others are explicitly stated, for example Austria may not host any foreign bases and Japan cannot participate in foreign wars. Yet Sweden, lacking formal codification, was more flexible during the Second World War in allowing troops to pass through its territory.[22]

Switzerland is a key example of a country outside of any military alliance, but maintaining a strong deterrent force

Armed neutrality is the posture of a state or group of states that has no alliance with either side in a war, but asserts that it will defend itself against resulting incursions from any party.[23] This may include:

The term derives from the historic maritime neutrality of the League of Armed Neutrality that the Nordic countries and Russia under the leadership of Katherine the Great invented in the late 18th Century, but has since been used only to refer to country neutralities.[27] Sweden and Switzerland are, independent of each other, famed for their armed neutralities, which they maintained throughout both World War I and World War II.[28] The Swiss and the Swedes each have a long history of neutrality: they have not been in a state of war internationally since 1815 and 1814, respectively. They pursue, however, active foreign policies and are frequently involved in peace-building processes around the world.[29] According to Edwin Reischauer, "To be neutral you must be ready to be highly militarized, like Switzerland or Sweden."[30]

In contrast, other neutral states may abandon military power (examples of states doing this include Costa Rica and Liechtenstein) or reduce it, but rather uses it for the express purpose of home defense and the maintenance of its neutrality. But the lack of a military does not result in neutrality as countries such as Iceland replaced a standing military with a military guarantee from a stronger power. 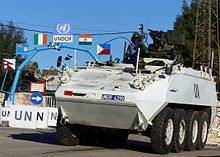 Irish units on UN patrol in the Golan Heights, Syria.

For many states, such as Ireland and Sweden, neutrality does not mean the absence of any foreign interventionism. Peacekeeping missions for the United Nations are seen as intertwined with it.[36] The Swiss electorate rejected a 1994 proposal to join UN peacekeeping operations. Despite this, 23 Swiss observers and police have been deployed around the world in UN projects.[37]

The legitimacy of whether some states are as neutral as they claim has been questioned in some circles, although this depends largely on a state's interpretation of its form of neutrality.

There are five members of the European Union that still describe themselves as a neutral country in some form: Austria, Ireland, Finland, Malta and Sweden. With the development of the EU's Common Security and Defence Policy, the extent to which they are, or should be, neutral is debated. For example, former Finnish Prime Minister, Matti Vanhanen, on 5 July 2006, stated that Finland was no longer neutral:

Mr Pflüger described Finland as neutral. I must correct him on that: Finland is a member of the EU. We were at one time a politically neutral country, during the time of the Iron Curtain. Now we are a member of the Union, part of this community of values, which has a common policy and, moreover, a common foreign policy.[38]

However, Finnish Prime Minister Juha Sipilä on 5 December 2017 still described the country as "militarily non-aligned" and that it should remain so.[39] Ireland, which sought guarantees for its neutrality in EU treaties, argues that its neutrality does not mean that Ireland should avoid engagement in international affairs such as peacekeeping operations.[40]

Since the enactment of the Lisbon Treaty, EU members are bound by TEU, Article 42.7, which obliges states to assist a fellow member that is the victim of armed aggression. It accords "an obligation of aid and assistance by all the means in [other member states'] power" but would "not prejudice the specific character of the security and defense policy of certain Member States" (neutral policies), allowing members to respond with non-military aid.

With the launch of Permanent Structured Cooperation (PESCO) in defense at the end of 2017, the EU's activity on military matters has increased. The policy was designed to be inclusive and allows states to opt in or out of specific forms of military cooperation. That has allowed most of the neutral states to participate, but opinions still vary. Some members of the Irish Parliament considered Ireland's joining PESCO as an abandonment of neutrality. It was passed with the government arguing that its opt-in nature allowed Ireland to "join elements of PESCO that were beneficial such as counter-terrorism, cybersecurity and peacekeeping... what we are not going to be doing is buying aircraft carriers and fighter jets". Malta, as of December 2017, is the only neutral state not to participate in PESCO. The Maltese government argued that it was going to wait and see how PESCO develops to see whether it would compromise Maltese neutrality.[41]

The neutrality of Moldova is an interesting case. According to Ion Marandici, Moldova has chosen neutrality in order to avoid Russian security schemes and Russian military presence on its territory.[42] Even if the country is constitutionally neutral, some researchers argue that de facto this former Soviet republic never was neutral, because parts of the Russian 14th army are present at Bendery, a territory de facto not controlled by Moldovan government.[42] The same author suggests that one solution in order to avoid unnecessary contradictions and deepen at the same time the relations with NATO would be "to interpret the concept of permanent neutrality in a flexible manner".[42] Neutrality is a constant topic in Moldovan domestic politics.[43]

Many countries made neutrality declarations during World War II. However, of the European states closest to the war, only Andorra, Ireland, Portugal, Spain, Sweden, Switzerland (with Liechtenstein), and Vatican (the Holy See) remained neutral to the end.

Their fulfillment to the letter of the rules of neutrality has been questioned: Ireland supplied important secret information to the Allies; for instance, the date of D-Day was decided on the basis of incoming Atlantic weather information, some of it supplied by Ireland but kept from Germany. Both Axis and Allied pilots who crash landed in Ireland were interned.[44]

Sweden and Switzerland, surrounded by possessions and allies of Nazi Germany similarly made concessions to Nazi requests as well as to Allied requests.[45] Sweden was also involved in intelligence operations with the Allies, including listening stations in Sweden and espionage in Germany. Spain offered to join the war on the side of Nazi Germany in 1940, allowed Axis ships and submarines to use its ports, imported war materials for Germany, and sent a Spanish volunteer combat division to aid the Nazi war effort. Portugal officially stayed neutral, but actively supported both the Allies by providing overseas naval bases, and Germany by selling tungsten.

The United States was initially neutral and bound by the Neutrality Acts of 1936 not to sell war materials to belligerents. Once war broke out, US President Franklin Delano Roosevelt persuaded Congress to replace the act with the Cash and carry program that allowed the US to provide military aid to the allies, despite opposition from isolationist members.[46] The "Cash and carry" program was replaced in March 1941 by Lend-Lease, effectively ending the US pretense of neutrality.

Sweden also made concessions to the German Reich during the war to maintain its neutrality, the biggest concession was to let the 163rd German Infantry Division to be transferred from Norway to Finland by Swedish trains, to aid the Finns in the Continuation War. The decision caused a political "Midsummer Crisis" of 1941, about Sweden's neutrality.

Equally, Vatican City made various diplomatic concessions to the Axis and Allied powers alike, while still keeping to the rules of the law of neutrality. The Holy See has been criticized—but largely exonerated later—for its silence on moral issues of the war.[47]

Note: Some countries may occasionally claim to be "neutral" but not comply with the internationally agreed upon definition of neutrality as listed above.