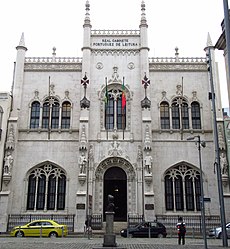 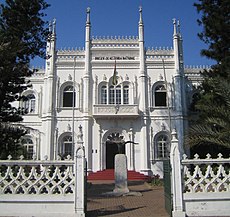 Neo-Manueline is a revival style of architecture which drew from the 16th century Manueline Late Gothic architecture of Portugal. Neo-Manueline constructions have been built across Portugal, Brazil, and the Lusofonia (the former Portuguese Empire).

The term manuelino was introduced in 1842 by Brazilian art historian Francisco Adolfo de Varnhagen[1] to designate the exuberant artistic style that developed during the reign of Manuel I of Portugal (1495–1521). The Manueline style coincided with the Age of Discovery and the peak of Portuguese maritime power. In the sequence of the Gothic Revival architecture fashion that spread for all over Europe since the middle of the 18th century, the Manueline style was considered the most authentical Portuguese architectural style.

Neo-Manueline started with the construction of the Pena Palace in Sintra by Ferdinand II between 1839 and 1849.[2] Another pioneering project was the restoration of the Jerónimos Monastery in Lisbon during the 1860s, in which the Manueline monastery gained a new tower and annexes built in Neo-Manueline style (which now house the Maritime Museum and the National Archaeology Museum). During this time the iconic Belém Tower was also restored with several Neo-Manueline additions. Other important Neo-Manueline buildings in Portugal are Rossio Railway Station, Lisbon (1886–90), Palace Hotel of Bussaco (1888–1907), the Sintra Town Hall (1906–09), the Counts of Castro Guimarães Palace in Cascais (1900) and the Quinta da Regaleira in Sintra (1904–10). The Neo-Manueline was also used in smaller buildings like private houses.

Examples of Neo-Manueline buildings can also be found in African and Asian territories of the former Portuguese Colonial Empire.

There are also examples of buildings influenced by the Neo-Manueline style in countries that were not directly related with the Portuguese culture. A fine example is the Arseny Morozov House (1895–99) in Moscow, Russia.