Naxos (/ˈnæksɒs, -soʊs/; Greek: Νάξος, pronounced [ˈnaksos]) is a Greek island and the largest of the Cyclades. It was the centre of archaic Cycladic culture. The island is famous as a source of emery, a rock rich in corundum, which until modern time was one of the best abrasives available.

The largest town and capital of the island is Chora or Naxos City, with 7,374 inhabitants (2011 census). The main villages are Filoti, Apiranthos, Vivlos, Agios Arsenios, Koronos and Glynado.

Climate is Mediterranean, with relatively mild winters and very warm summers. The Köppen Climate Classification subtype for this climate is "Csa". (Mediterranean Climate).[1] 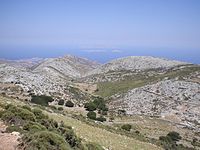 Landscape of the island

According to Greek mythology, the young Zeus was raised in a cave on Mt. Zas ("Zas" meaning "Zeus"). Homer mentions "Dia"; literally the sacred island "of the Goddess". Károly Kerényi explains:

This name, Dia, which means 'heavenly' or 'divine', was applied to several small craggy islands in our [Aegean] sea, all of them lying close to larger islands, such as Crete or Naxos. The name "Dia" was even transferred to the island of Naxos itself, since it was more widely supposed than any other to have been the nuptial isle of Dionysus.[3]

One legend has it that in the Heroic Age before the Trojan War, Theseus abandoned Ariadne on this island after she helped him kill the Minotaur and escape from the Labyrinth. Dionysus (god of wine, festivities, and the primal energy of life) who was the protector of the island, met Ariadne and fell in love with her. But eventually Ariadne, unable to bear her separation from Theseus, either killed herself (according to the Athenians), or ascended to heaven (as the older versions had it). The Naxos portion of the Ariadne myth is also told in the Richard Strauss opera Ariadne auf Naxos.

The giant brothers Otus and Ephialtes figure in at least two Naxos myths: in one, Artemis bought the abandonment of a siege they laid against the gods, by offering to live on Naxos as Otus's lover; in another, the brothers had actually settled Naxos.

Stelida quarry, south-west of Chora,[4] contains Mousterian tools dating back to the Middle Paleolithic era, which indicates that Neanderthal activity on the island spanned almost 200,000 years ago.[5]

Zas Cave, inhabited during the Neolithic era, contained objects of stone from Melos and copper objects including a dagger and gold sheet. The presence of gold and other objects within the cave indicated to researchers the status of the inhabitant.[6]

Emery was exported during that time, to other islands.[7]

During the 8th and 7th centuries BC, Naxos dominated commerce in the Cyclades. Naxos was the first Greek city-state to attempt to leave the Delian League circa 476 BC; Athens quickly squashed the notion and forcibly removed all military naval vessels from the island's control. Athens then demanded all future payments from Naxos in the form of gold rather than military aid.

Herodotus describes Naxos circa 500 BC as the most prosperous Greek island.[8]

In 502 BC, an unsuccessful attack on Naxos by Persian forces led several prominent men in the Greek cities of Ionia to rebel against the Persian Empire in the Ionian Revolt, and then to the Persian War between Greece and Persia. 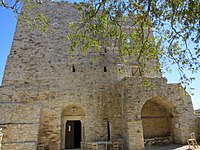 In Late Antiquity, the island was part of the province of the Islands.[9]

Under the Byzantine Empire, Naxos was part of the thema of the Aegean Sea, which was established in the mid-9th century.

In Byzantine times, the island's capital was on the southern fortress of Apalyres.[11] During this time, it suffered from Saracen raids, particular during the existence of the Emirate of Crete (824–961), to which the island occasionally paid tribute. Traces of Muslim artistic influence are visible in frescoes from the 10th century.[11] Nevertheless, as in Antiquity, Naxos was celebrated for its agriculture and animal husbandry; the 12th-century geographer al-Idrisi records extensive cattle raising on the island.[11]

In the late 12th century, it may have been the capital of a short-lived thema of the "Dodekanesos".[9]

Further information: Duchy of the Archipelago 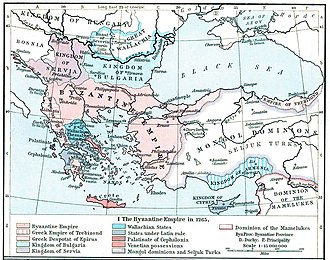 The Duchy of Naxos and other Frankish states, carved from the Byzantine Empire, as they were in 1265.[12]

In the aftermath of the Fourth Crusade, with a Latin Empire under the influence of the Venetians established at Constantinople, the Venetian Marco Sanudo conquered the Naxos and most of the other Cyclades in 1205–1207.[9] Of all the islands, only on Naxos was there any opposition to Sanudo: a group of Genoese pirates had occupied the castle between the end of Byzantine rule and Sanudo's arrival. To steel his band's resolve, Sanudo burnt his galleys "and bade his companions to conquer or die". The pirates surrendered the castle after a five weeks' siege.[13]

Naxos became the seat of Sanudo's realm, known as the "Duchy of Naxos" or "Duchy of the Archipelago".[9] Twenty-one dukes in two dynasties ruled the Archipelago, until 1566; Venetian rule continued in scattered islands of the Aegean until 1714. Under Venetian rule, the island was called by its Italian name, Nasso.

The Sanudi introduced Western feudal law to the island, based on the Assizes of Romania. However, the native Greek population continued to use Byzantine law for civil matters a least until the late 16th century.[9]

In the 13th century, following the capture of Antalya and Alanya on the southern Anatolian coast by the Seljuk Turks, refugees from these areas settled in Naxos.[11] In the 14th century, the island was once more exposed to raids, this time from the Anatolian Turkish beyliks, chiefly the Aydınids. In turn, the Sanudi assisted the Genoese in capturing Chios in 1304 and the Knights Hospitaller in their conquest of Rhodes in 1309, in order to stop these islands being used as Turkish pirate base. Nevertheless, raids against Naxos are recorded in 1324 and 1326, and in 1341, Umur of Aydın carried off 6,000 people from the island and imposed a payment of tribute. Two years later, however, the Smyrniote crusade captured his main port, Smyrna.[11]

The relief was temporary, however, as Turkish raids recommenced later in the century. The island was so depopulated that Cristoforo Buondelmonti in c. 1420 claimed that there were not enough men to wed the Naxiot women.[11] The rising Ottoman Empire first attacked the island in 1416, but the Sultans recognized Venetian overlordship over the Duchy in successive treaties, in exchange for an annual tribute.[11]

The Ottoman administration remained essentially in the hands of the Venetians; the Porte's concern was satisfied by the returns of taxes. Very few Turks ever settled on Naxos, and Turkish influence on the island is slight. Under Ottoman rule the island was known as Turkish: Nakşa. Ottoman sovereignty lasted until 1821, when the islands revolted; Naxos finally became a member of the Greek state in 1832.

Naxos is a popular tourist destination, with several ruins. It has a number of beaches, such as those at Agia Anna, Agios Prokopios, Alikos, Kastraki, Mikri Vigla, Plaka, and Agios Georgios, most of them near Chora. As other cycladic islands, Naxos is considered a windy place perfect for windsurfing, as well as kitesurfing. There are seven sports clubs in the island that offer both of these sports and other water activities.

Naxos is the most fertile island of the Cyclades. It has a good supply of water in a region where water is usually inadequate. Mount Zeus (1,004 metres or 3,294 feet) is the highest peak in the Cyclades, and tends to trap the clouds, permitting greater rainfall. This has made agriculture an important economic sector with various vegetable and fruit crops as well as cattle breeding, making Naxos the most self-sufficient island in the Cyclades. Naxos is well known within Greece for its "Arseniko Naxou" cheese, potatoes and Kitron, a local lemon-citrus spirit.