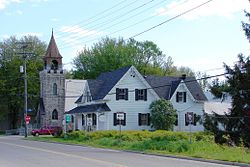 Navan is a rural community in Cumberland Ward in Ottawa, Ontario, Canada. It is located southeast of the suburban community of Orleans. Before its amalgamation with the city in 2001, Navan was within the City of Cumberland. It was named after the town of Navan in Ireland.

Navan's proximity to the suburban area of Orleans means that it is quickly becoming more suburban in nature itself. About 1,905 people live in the vicinity of Navan (Canada 2016 Census).[1]

The Navan Fair is an annual event that takes place in the summertime, typically in August. It is held at the fairgrounds off of Colonial Road. The fair currently features midway rides, live music, concession stands, demolition derbies, exhibitions, parades, and various shows. The first fair took place in 1946. The admission for the first year of the fair was 35 cents for adults, 25 cents for children, and 25 cents for cars.[2]