The Pasha Liman Base, or Pashaliman Base, is an Albanian Navy base south of Vlorë, Albania.

Pashaliman was the only Soviet base in the Mediterranean in the 1950s.[2] It was the hot spot of conflict between the Soviets and the Albanians in 1961 when Albania pulled out of the Warsaw Pact and the dispute of the four Whiskey-class submarine ownership which Albania had seized.[3] Following the collapse of the Communist regime, the base was rebuilt by Turkey and under a bilateral agreement the Turkish Navy has the right to use it.[1][4][5] 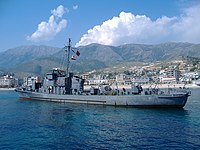 Three of the Albanian Navy's four Damen Stan patrol vessels were built at Pashaliman, the most recent completed in 2014.[6] Currently, four retired Whiskey-class submarines previously owned by the Soviet Union are still located on the facility alongside Albania's active-duty naval vessels. They can be seen via satellite images of the base.

The Naval Force often operates naval exercises in the Bay of Vlorë, out of Pashaliman.[7] This includes exercises with other nations, such as the United Kingdom.[8] The most recent exercise, Sarex '16, took place in April 2016.[9]

An Albanian-Turkish military cooperation agreement was signed in 1992 that encompassed rebuilding Albania's Pasha Liman Base by Turkey alongside granted access for Turkish use.[1]

A civilian naval engineering firm and shipyard also operate out of the military facility, providing a wide range of services.[10]