The National Railways of Zimbabwe (NRZ) is the parastatal railway of Zimbabwe (formerly Rhodesia). The Zimbabwean railway system was largely constructed during the time of British colonial rule and was called Rhodesia Railways (RR) until 1980. Segments of its systems were intended to be part of the Cape to Cairo Railway. 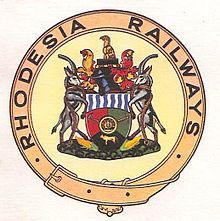 Rhodesia Railways was a heavy user of the Garratt locomotive. In June 1976, 100 of its 109 steam locomotives were Garratts. For operational purposes, Rhodesia Railways was divided into two areas: those lines north-east of Gwelo (now Gweru) fell into the Eastern Area, with all other lines in the Southern Area.[3] 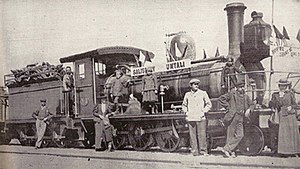 Opening of the railway to Umtali in 1899

NRZ operates about 4,225 km (2,600 miles) of railway lines, all of 3 ft 6 in (1,067 mm) providing passenger and freight services. The gauge is standard for all of southern Africa. NRZ has an important transit function in the southern part of Africa and is well linked with neighboring countries: toward the north, at Victoria Falls the system links to the Zambia Railways, crossing the Victoria Falls Bridge. Toward the Indian ocean the system links to the Beira Railroad Corporation in Mozambique. A second line toward Mozambique reaches Maputo. To the west, a connecting line link ups to Botswana Railways to reach South Africa, eventually reaching Durban and Cape Town. A direct line to South Africa from Bulawayo was opened in 1999 by the Beitbridge Bulawayo Railway. The 313 km (194-mile) Gweru-Harare section is electrified at 25 kV AC. The section was extensively vandalised and the copper cables stolen. The line is no longer functional.

Steam locomotives are still used in Zimbabwe; they have proven so popular with tourists that there are plans to refurbish several more steam locomotives.[4] However, funding is constrained, and diesel-hauled freight transport is a higher priority.[5]

The NRZ has also suffered from the general decline of the country's economy. Neglect of maintenance, lacking spare parts and overdue replacement of equipment have led to a situation were only part of the railway net is in good condition and equipment problems have led to reduced service. Steam locomotives have been reintroduced since 2004 as coal is in relatively good supply, while diesel must be imported and electricity shortages are common. Further, the company is seriously indebted, making it impossible to solve this situation without external help.[6] Goods transport has declined, from 18 million tonnes in 1998 to 2 million tonnes in 2010.[7]

More than 80 companies attended a compulsory pre-bid conference for the Framework to Recapitalise the National Railways of Zimbabwe held on 30 May 2017 in response to a Request for Proposals floated by the organisation in national, regional and international newspapers.

Fifty of the companies at the pre-bid conference held in Bulawayo were from Zimbabwe, 18 from South Africa and eight from China. The rest were from the United Kingdom, Malaysia, India, Belgium and Dubai.

The Government of Zimbabwe in April approved the Framework to Recapitalise the National Railways of Zimbabwe at a cost of more than US$400 million after the NRZ engaged chartered accountancy firm, Deloitte and Touche as its Transaction Advisor to assist in raising money to recapitalise its operations.

After the pre-bid conference, a voluntary due diligence inspection of NRZ assets was organised for interested investors from 6 to 9 June. Over 10 companies took up the offer and spent four days visiting NRZ facilities.

The due diligence inspection started with a visit to the hub of NRZ maintenance work, the Bulawayo Mechanical Workshops, which boasts the largest factory space in Zimbabwe. This is where locomotives and wagons are repaired and refurbished.

The potential investors were also taken on a tour of the Central Mechanical Workshops, Mpopoma Diesel Running Maintenance depots and Mpopoma Repair Siding. Also visited were the Central Maintenance Vehicles Workshop, the Bridge and Structural Workshop and the Materials Yard. These facilities are in Bulawayo, the headquarters of the NRZ.

The investors were taken on a special train to Dete, with stops at Sawmills to see areas which they may be interested in investing in, including a re-railing (laying of new rail) project on a section of the north corridor rail and the Centralised Train Control System at Sawmills. They also assessed assets at Dabuka Marshalling Yards near Gweru where they inspected the track condition and the electrified section.

The tendering process closed on 4 July at 10 am. Six companies successfully submitted their bids to the State Procurement Board (SPB). The six companies are from China, Malaysia, South Africa, Switzerland and Zimbabwe. They are Sino Hydro, China Civil Engineering Construction Corporation, SMH Rail, Transnet Freight Rail, Diaspora Infrastructure Development Group (DGIG) which is a consortium between Transnet and Zimbabweans in South Africa, Crowe Horwath and Croyeaux Limited.

The next step is the adjudication process of the six bidders, where the best bidder as per the proposals will be selected and chosen for the project.

The recapitalisation project will involve the rehabilitation and renewal of plant, equipment, rolling stock, track, signalling and telecommunication infrastructure and the supporting information technology systems.

Steam locomotives of different classes at the museum area (1990)

The Zimbabwe National Railways Museum is in Bulawayo; it has a selection of locomotives, railway carriages and other interesting things. One of the exhibits is a Rhodesia Railways class DE2 diesel locomotive.

Well known employees (past and present)