Infinite Construction - STEAM
Not to be confused with Network Rail.
For the Australian railway operator of the same name, see National Rail Corporation.
This article is about the nationalised railway service from 1999 to present. For former rail transport in Great Britain, see British Rail.

National Rail (NR) in the United Kingdom is the trading name licensed for use by the Rail Delivery Group, an unincorporated association whose membership consists of the passenger train operating companies (TOCs) of England, Scotland, and Wales. The TOCs run the passenger services previously provided by the British Railways Board, from 1965 using the brand name British Rail. Northern Ireland, which is bordered by the Republic of Ireland, has a different system. National Rail services share a ticketing structure and inter-availability that generally do not extend to services which were not part of British Rail. 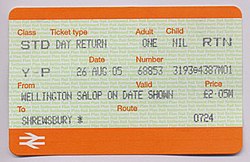 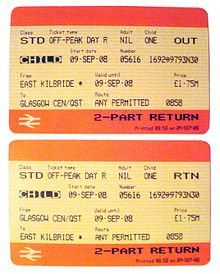 National Rail should not be confused with Network Rail. National Rail is a brand used to promote passenger railway services, and providing some harmonisation for passengers in ticketing, while Network Rail is the organisation which owns and manages most of the fixed assets of the railway network, including tracks, stations and signals.

Twenty eight privately owned train operating companies, each franchised for a defined term by government, operate passenger trains on the main rail network in Great Britain. The Rail Delivery Group is the trade association representing the TOCs and provides core services, including the provision of the National Rail Enquiries service. It also runs Rail Settlement Plan, which allocates ticket revenue to the various TOCs, and Rail Staff Travel, which manages travel facilities for railway staff. It does not compile the national timetable, which is the joint responsibility of the Office of Rail Regulation (allocation of paths) and Network Rail (timetable production and publication).

Since the privatisation of British Rail there is no longer a single approach to design on railways in Great Britain. The look and feel of signage, liveries and marketing material is largely the preserve of the individual TOCs.

However, National Rail continues to use BR's famous double-arrow symbol, designed by Gerald Burney of the Design Research Unit. It has been incorporated in the National Rail logotype and is displayed on tickets, the National Rail website and other publicity. The trademark rights to the double arrow symbol remain state-owned, being vested in the Secretary of State for Transport.[1]

The double arrow symbol is also used to indicate a railway station on British traffic signs.[2]

The National Rail (NR) logo was introduced by ATOC in 1999, and was used on the Great Britain public timetable for the first time in the edition valid from 26 September in that year. Rules for its use are set out in the Corporate Identity Style Guidelines published by the Rail Delivery Group, available on its website.[3] "In 1964 the Design Research Unit—Britain’s first multi-disciplinary design agency founded in 1943 by Misha Black, Milner Gray and Herbert Read—was commissioned to breathe new life into the nation’s neglected railway industry".[4] The NR title is sometimes described as a "brand".[5] As it was used by British Rail, the single operator before franchising, its use also maintains continuity and public familiarity; and it avoids the need to replace signage.

The lettering used in the National Rail logotype is a modified form of the typeface Sassoon Bold. Some train operating companies continue to use the former British Rail Rail Alphabet lettering to varying degrees in station signage, although its use is no longer universal; however it remains compulsory (under Railway Group Standards) for safety signage in trackside areas and is still common (although not universal) on rolling stock.

The British Rail typefaces of choice from 1965 were Helvetica and Univers, with others (particularly Frutiger) coming into use during the sectorisation period after 1983. TOCs may use what they like: examples include Futura (Stagecoach Group), Helvetica (FirstGroup and National Express), Frutiger (Arriva Trains Wales), Bliss (CrossCountry), and a modified version of Precious by London Midland.

Although TOCs compete against each other for franchises, and for passengers on routes where more than one TOC operates, the strapline used with the National Rail logo is 'Britain's train companies working together'.

Several conurbations have their own metro or tram systems, most of which are not part of National Rail. These include the London Underground, Docklands Light Railway, London Tramlink, Blackpool Tramway, Glasgow Subway, Tyne & Wear Metro, Manchester Metrolink, Sheffield Supertram, West Midlands Metro and Nottingham Express Transit. On the other hand, the largely self-contained Merseyrail system is part of the National Rail network, and urban rail networks around Birmingham, Cardiff, Glasgow and West Yorkshire consist entirely of National Rail services.

London Overground is a hybrid: its services are operated via a concession awarded by Transport for London, and are branded accordingly, but until 2010 all its routes used infrastructure owned by Network Rail, that is because of the East London line which was a London Underground line converted to a mainline but it is still National Rail. London Overground now also owns some infrastructure in its own right, following the reopening of the former London Underground East London line. Since all the previous LO routes were operated by National Rail franchise Silverlink until November 2007, they have continued to be shown in the National Rail timetable and are still considered to be a part of National Rail.

There are many privately owned or heritage railways in Great Britain which are not part of the National Rail network and mostly operate for heritage or pleasure purposes rather than as public transport, but some have connections to National rail track.

National Rail services have a common ticketing structure inherited from British Rail. Through tickets are available between any pair of stations on the network, and can be bought from any station ticket office. Most tickets are inter-available between the services of all operators on routes appropriate to the journey being made. Operators on some routes offer operator-specific tickets that are cheaper than the inter-available ones.

Through tickets involving Heathrow Express and London Underground are also available. Oyster pay-as-you-go can be used on National Rail in Greater London from 2 January 2010.[6] These same areas can also be journeyed to using a contactless debit/credit card. Contactless also covers some areas that oyster doesn't such as the Crossrail line to Reading, or the Thameslink station at Oakleigh Park.[7][8]

Passengers without a valid ticket boarding a train at a station where ticket-buying facilities are available are required to pay the full Open Single or Return fare. On some services penalty fares apply - a ticketless passenger may be charged the greater of £20 or twice the full single fare to the next stop. Penalty Fares can be collected only by authorised Revenue Protection Inspectors, not by ordinary Guards.[9]

National Rail distributes a number of technical manuals on which travel on the railways in Great Britain is based, such as the National Rail Conditions of Travel,[10] via their website.

Pocket timetables for individual operators or routes are available free at staffed stations. The last official printed timetable with up to 3000 pages was published in 2007. Now the only complete print edition is published by Middleton Press (as of October 2016). A digital version of the full timetable is available as a pdf file without charge on the Network Rail website,[11] however passengers are recommended to obtain their timetables from the individual train companies.

The National Rail Enquiries website includes a journey planner, fare and live departure information. The site is designed to complement the myriad different websites of Britain's privatised rail companies, so when users have selected which tickets they wish to buy, they are redirected to the most relevant train company website, where they can buy their tickets without booking fees.

In 2012 the website was joined by a mobile app mirroring its functionality. The app is available for iPhone, Android and Windows Phone.[12][13] However Trainline remains the most downloaded rail app in the UK with 9.4 million users.[14]