The National Basketball League of Canada (NBL Canada; French: Ligue nationale de basketball du Canada) is a Canadian professional men's basketball league. The NBL was founded in 2011, when three teams formerly of the Premier Basketball League joined with four new franchises to form the NBL's "Original Seven". The league has changed in size multiple times and currently has eight teams; four located in the Atlantic provinces and four in Ontario. The most recent champions are the Moncton Magic, having defeated the St. John's Edge 4–0 in the 2019 NBL Finals. The league's season begins in November and ends in April of the following year.

In mid-2011, discussion began of a domestic basketball minor league in Canada. Three franchises from the Premier Basketball League (PBL), the Halifax Rainmen, Quebec Kebs, and Saint John Mill Rats were the first to join the National Basketball League of Canada (NBL).[2] The teams had been unhappy with the officiating in the PBL.[3] On May 12 of that year in Halifax, Nova Scotia, league CEO Andre Levingston held a press conference regarding the creation of the NBL Canada.[4] By the end of the summer, the London Lightning, Moncton Miracles, Oshawa Power, and Summerside Storm were established and had announced that they would join the league.[5][6][7][8] There had also been unsuccessful attempts to start up teams in Fredericton, New Brunswick and Kingston, Ontario.[9][10][11] 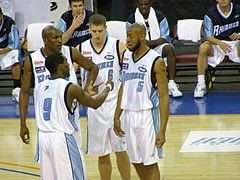 The Halifax Rainmen (pictured in 2008) chose to partake in the NBL Canada due to the poor quality of the PBL.

John Kennedy, a native of Windsor and a sports executive based in Los Angeles, was named the first commissioner of the NBL. He previously had experience working with the Los Angeles Lakers and Los Angeles Clippers of the National Basketball Association (NBA). League president Andre Levingston spoke on his expectations of the commissioner, saying, "We wanted to make sure we had a person who was going to be committed and was willing to roll up his sleeves and work very hard, someone who understood business, had business relationship and a person who was going to govern the league the right way."[12]

In June 2011, the league finalized rules for its first season.[13] There would be seven teams, four of which qualified for the playoffs, and no divisions.[14] It would follow FIBA rules and each team would play 36 games in the regular season. Team rosters could contain 10–12 players, at least two of them Canadian, and they had a salary cap of $150,000 Canadian.[13] Players could earn potentially $70,000 in one season, and each game would draw an average of 3,000 fans, varying by location.[15] Levingston envisioned the NBL Canada as a more stable alternative to other North American minor basketball leagues with players living close to home while playing professionally.[15]

The NBL Canada held its first draft on August 21, 2011, at Rogers Centre. The Power selected Morgan Lewis of the University of Findlay with the first overall pick.[16] Jerome Brown, who was picked fifth overall by the Mill Rats, was the first Canadian to be taken in the draft.[17] The event was viewed by more than 6,000 people online from 93 countries.[14] 180 players from across the world attended the preceding NBL Canada combine.[18]

The first player to be signed into the NBL Canada was Canadian Yannick Anzuluni, who joined the Kebs on a three-year contract on August 17, 2011.[19] On October 29, in the first game of the NBL Canada's inaugural 2011–12 NBL Canada season, the Kebs defeated the Miracles at the Colisée de Laval.[20] Within a week, every team in the league had played at least one game.[21] The NBL Canada's opening season brought in marquee players such as Gabe Freeman, Anthony Anderson, and Lawrence Wright.[14] Amid the 2011 NBA lockout, six players with past experience in the National Basketball Association (NBA), including Eddie Robinson and Rodney Buford, joined the NBL Canada.[14][15]

The London Lightning, coached by Micheal Ray Richardson, soon emerged as the top team in the league, going 28–8 by end of the regular season, which lasted until March 4, 2012. The team defeated the Halifax Rainmen, 3–2, in the best-of-five NBL Canada Finals series to claim the championship.[22] They drew a league-high 5,106 fans to the John Labbatt Centre for the game.[14][22] Following the NBL Canada's inaugural year, Canadian sports analyst Alex Walling claimed it was a success, commenting, "The NBL could hold its head up high. It has been a great season and they've gained a great deal of creditability. They've earned the kudos."[23] Levingston touted the league because it "played a full schedule on every set date and never had a problem."[23] Shortly after the season, in April, the NBL Canada held its first All-Star Game at Halifax Metro Centre.[14]

For its second season, the team salary cap remained at $150,000, with the possibility of an increase in the future. The NBL Canada also considered several cities in The Maritimes, Ontario, and Quebec, including Sydney, Nova Scotia.[24] The league soon welcomed the Windsor Express after an ownership group from Windsor, Ontario and Detroit, led by Dartis Willis, Sr., began investing in the expansion team in June 2012.[25][26] The team, which was approved into the league in late July, would play out of WFCU Centre.[26][27] On the other hand, the Quebec Kebs, who had relocated to Laval, Quebec in the offseason, left the league after experiencing challenges in their first year.[28] By November, the Kebs were replaced with the Montreal Jazz, who would compete at Centre Pierre Charbonneau.[29]

In the 2012–13 season, the league consisted of eight teams separated into divisions: four teams competed in the Atlantic Division, while the remaining four competed in the Central Division.[30][31]

Following the 2013–14, the league announced its first national broadcast deal with beIN Sports. Starting with the 2014–15 season, 2 regular season games will be aired each week with special coverage for playoffs and special events such as the All Star Weekend. The deal runs through the 2016–17 season.[32]

The 2014–15 NBL season ended in controversy as the Windsor Express were declared winners of the championship series after the Halifax Rainmen failed to show for the seventh and deciding game. The Rainmen organization claimed that their players feared for their safety following a physical altercation earlier in the day with the Express, as the reason for not appearing in the game that night.[33] 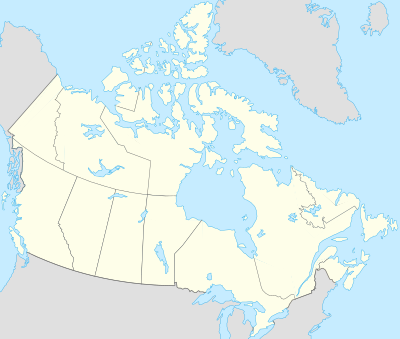 The London Lightning have the most championships with four wins, the Windsor Express are second with two wins. The Halifax Hurricanes appeared in the finals in each of their first three seasons, winning in their first appearance. The Halifax Rainmen and the Island Storm have appeared in two league finals failing to win the trophy. The KW Titans and the Sudbury Five are the only active teams yet to reach the finals.

Statistics below are for all-time leaders at the end of the 2017–18 regular season only.

Until the 2013–14 season, the NBL Canada held All-Star Weekend every year. In the 2012 game, players Joey Haywood and Eddie Smith chose each team through a fantasy draft.[43] The best performer in the game was named All-Star Game Most Valuable Player.[44] Starting with the next All-Star game, the league began matching top players from the Central Division with those from the Atlantic Division.[45] At least three Canadian players were required on each team.[46] The NBL Canada discontinued the event after the 2014 game.[14]

The commissioner of the NBL Canada is the league's chief executive and is elected by the board of directors and[47] a group of representatives from each team.[48]