The National Assembly (Bulgarian: Народно събрание, Narodno sabranie) is the unicameral parliament and legislative body of the Republic of Bulgaria.

The National Assembly was established in 1879 with the Tarnovo Constitution.

The National Assembly consists of 240 members elected for a four-year term elected by proportional representation in multi-seat constituencies. Political parties must garner a minimum of 4% of the national vote in order to enter the Assembly. Bulgaria has a multi-party system.

The Assembly is responsible for enactment of laws, approval of the budget, scheduling of presidential elections, selection and dismissal of the Prime Minister and other ministers, declaration of war, concluding peace and deployment of troops outside Bulgaria, and ratification of international treaties and agreements. It is headed and presided by the Chairperson of the National Assembly of Bulgaria.

The Assembly administers the publication of the State Gazette, Bulgaria's gazette of record.

By the Constitution, the National Assembly is inaugurated by the eldest elected member of Parliament. On the first day of sitting, he or she presides over the election of the Speaker (Chairperson) and two deputies.[3]

Once elected, the Speakers retain their party allegiances, which means that they remain as MPs and are allowed to take part in debates and voting.

121 MPs must be present in order for any session to commence, and 50%+1 of those present must vote "for" any point of order or bill to be approved.

Ministers may be chosen from among the MPs or they may be experts outside Parliament. All MPs picked to be Cabinet ministers lose their MP status, and other members from their party are called up to Parliament to fill the seats they vacate.

Parliament sits Wednesday to Friday, and sessions begin at 9 am. Parliamentary committees sit in the afternoons.

The Chamber is made up of 286 seats, all facing the 5-seat speaker's bench in a 26 x 11 arrangement. In front of the Speaker, also facing the chamber, is the pulpit, in front of which is the stenographers' desk.

Parties sit in parliamentary groups, loosely following the rule that the political left sit to the Speaker's left and the political right to his right. Generally, the largest parties choose the left, right or centre wings of the chamber, with smaller blocks accommodating themselves wherever convenient. Individual MPs will sometimes sit entirely outside their block or stand, and, since compulsory electronic registration was implemented, may even vote from any seat in the house.

To the speaker's right, also facing the chamber, is a section with 17 seats reserved for the Cabinet, any of whom may or may not be present at any time during a parliamentary session. Any of them may, however, be called up by Parliament at any time if needed.[4]

The first National Assembly of Bulgaria in Veliko Tarnovo

In addition to the ordinary National Assembly, a Grand National Assembly (Велико народно събрание, Veliko narodno sybranie) may be convened in order for matters of special jurisdiction, such as: 1) Adoption of a new Constitution; 2) Amendment of certain articles of the Constitution, e.g. those related with the basic civil rights; 3) Changes in the territory (gain or loss) of the Republic, etc. Before the World War II the Grand National Assembly was also competent in electing the Regency of the Bulgarian Kingdom if the tzar had not come to age. The First and the Third Grand National Assemblies also elected the first two Bulgarian monarchs after the liberation from Ottoman rule – Prince (Knjaz) Alexander Battenberg and Prince (Knjaz) Ferdinand Saxe Coburg-Gotha.

A total of seven Grand National Assemblies have been in operation in Bulgaria, the last one from 10 July 1990 to 12 July 1991 adopting the current constitution.

Another view from Tsar Osvoboditel.

The National Assembly's main building has been proclaimed a monument of culture for its historic significance. Situated in downtown Sofia, it was designed in Neo-Renaissance style by Konstantin Jovanović. 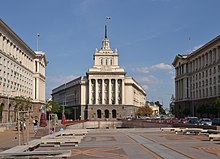 Due to insufficient space in the main building at Parliament Square, some administrative offices of the National Assembly are now housed by the former headquarters of the Bulgarian Communist Party, located at the Largo. There has been a proposal that the entire National Assembly be permanently moved to the old Party house building, with its inner courtyard being converted into an interior space for the plenary chamber.[5]