The National Assembly is the bicameral legislature of the nation of Belize. It is divided into the House of Representatives, with 31 members, elected by universal suffrage, and the Senate, with 13 members, appointed by the Governor-General in consultation with the Prime Minister and the Leader of the Opposition. The presiding officer of the House is the Speaker, while the Senate is presided over by the President. 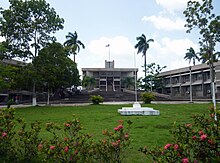 The National Assembly of Belize, known as British Honduras prior to independence in 1981, was first introduced on 31 December 1963, replacing the unicameral Legislative Assembly.

The National Assembly has the power to debate and create laws based on the Constitution. It typically meets, both House and Senate, once a month, with other meetings called as necessary.

Since 1970, following the relocation of the capital to Belmopan, the Parliament has sat at National Assembly Building, Belmopan in the Cayo District.

The Senate is the Upper House. The Senate discusses and confirms bills that are sent from the House of Representatives. It is made up of 13 members who are all appointed by the Governor General. The President of the Senate presides over meetings.