Nasiriyah (Arabic: الناصرية‎; BGN: An Nāşirīyah; also spelled Nassiriya or Nasiriya) is a city in Iraq. It is situated along the banks of the Euphrates River, about 225 miles (370 km) southeast of Baghdad, near the ruins of the ancient city of Ur. It is the capital of the Dhi Qar Governorate. Its population 2003 was about 560,000, making it the fourth largest city in Iraq.[2] It had a religiously diverse population of Muslims, Mandaeans and Jews in the early 20th century,[3] but today its inhabitants are predominantly Shia Muslims.[2]

Nasiriyah was founded by the Muntafiq tribe in the late 19th century during the Ottoman era.[4] It has since become a major hub for transportation.[2] Nasiriyah is the center of a date-growing area. The city's cottage industries include boat-building, carpentry and silver working.[5] The city museum has a large collection of Sumerian, Assyrian, Babylonian, and Abbasid artifacts. The ruins of the ancient cities of Ur and Larsa are located nearby. 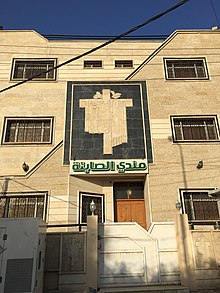 Mandaean house of worship in Nasiriyah, 2016

Nasiriyah was founded in 1872 by Nasir al-Sadoon Pasha (Arabic: ناصر السعدون باشا‎), the sheikh ("chief") of the Muntafiq tribal confederation, after whom the city was named.[4][7] During that same year, it became the administrative center of the Muntafiq sanjak ("district").[4] Nasir Pasha was the head of the Sunni Muslim al-Saadun clan, which was the ruling family of the Muntafiq whose tribesmen were mostly Shia Muslims. At the time of Nasiriyah's founding, Muntafiq power in the Basra Vilayet (southern Iraq) had increasingly given way to Ottoman centralization. However, Nasir Pasha was appointed by the Ottomans as the head of the vilayet (province) and registered large tracts of land around Nasiriyah into his name.[4][7] His son, Saadun Pasha, became the mutassarif (tax collector) of Nasiriyah, and by 1908, he virtually governed southern Iraq on their behalf, having curried their favor by strongly supporting the 1908 Young Turk Revolution.[8]

It was a major center of trade in Ottoman Iraq and imported foreign goods via commerce with Baghdad and Basra. The chief commodities Nasiriyah produced included leather, grain and ghee. The town contained about 600 well-built stone houses, but most buildings and homes were constructed from mud brick. There were about 350 shops in Nasiriyah as well as five khans (inns). The area surrounding the town was abundant in date palms and grain fields. The town was not protected by a wall like other major administrative centers. In addition to the administrative functions it played for the Muntafiq district, Nasiriyah served as a government outpost and settlement in a generally nomadic region dominated by local Bedouin tribes.[9] 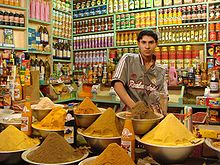 During World War I, the British conquered the city, controlled at the time by the Ottoman Empire, in July 1915. Some 400 British and Indian and up to 2,000 Turkish soldiers were killed in the battle for Nasiriyah on 24 July 1915.[10]

In 1920, Nasiriyah had 6,523 inhabitants. The population was ethnically diverse with Arab Muslims accounting for 72.7% of the inhabitants, Jews 8%, Mandeans 9.7%, Persians 4.6%, Lurs 4.3% and Christians, Turks, and Indians forming the remainder of the population.[3]

The Iraqi Communist Party's first cell was founded in Nasiriyah by Yusuf Salman Yusuf (known as "Fahd") in the 1930s.[11] It was also the birthplace of Fuad al-Rikabi, who founded the Iraqi Baath Party in the 1950s. At the time, the Iraqi Baath consisted mostly of people from Nasiriyah, namely Rikabi's relatives and associates.[12] 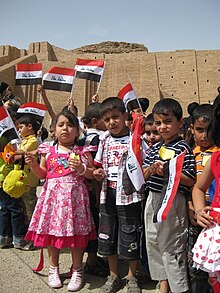 Flickr – Kindergarten students from Mumsuna school in Nasiriyah attend the opening of Ziggurat of Ur in 2009 (it had been closed following the U.S. invasion in 2003)

During the 1991 Gulf War, Nasiriyah marked the furthest point to which coalition forces penetrated Iraq, with the United States 82nd Airborne Division and elements of the 101st Airborne Division reaching the main road just outside the city. In March 1991, following the American withdrawal at the war's end, the Shia population of Nasiriyah took part in the revolt against the rule of Iraqi president Saddam Hussein. The revolt was violently subdued by the Iraqi military with heavy loss of life and much physical damage. Many of its inhabitants were massacred by Iraqi government forces.[13]

Until the 2003 war, Nasiriyah was home to one of the biggest communities of Mandeans in Iraq.[14]

In March 2003, Nasiriyah was one of the first major battles of the 2003 invasion of Iraq. Phillip Mitchell of the International Institute for Strategic Studies so described the town's strategic importance to The Guardian:

Nasiriyah is a major administrative headquarters and is also [Iraqi General] Majid's military district headquarters. It is a major strategic crossing point of the Euphrates. For all those reasons Nasiriyah will be well defended, which will slow the Mech [invasion] down for a while.

On March 23, the U.S. invasion force was ambushed near the city: 11 US Soldiers were killed and Army Private Jessica Lynch, Army Private Lori Piestewa and Specialist Shoshana Johnson were taken prisoners of war during the skirmishes. The Battle of Nasiriyah between Iraqi forces and the 2nd Marine Expeditionary Brigade under the call sign "Task Force Tarawa" of the U.S. Marine Corps lasted between about March 23 and March 29, in which 18 Marines were killed and over 150 were wounded, including a number hit by friendly fire from Air Force A‑10 aircraft,[15] but the Iraqi resistance was defeated fairly rapidly thereafter. The town has been relatively calm since the fall of Saddam Hussein. A truck bomb killed 18 Italian soldiers and 11 civilians in November 2003 (see 2003 Nasiriyah bombing), and clashes erupted here in April 2004.[citation needed]