In some countries, narrow gauge is the standard; Japan, Indonesia, Taiwan, New Zealand, South Africa, and the Australian states of Queensland, Western Australia and Tasmania have a 3 ft 6 in (1,067 mm) gauge, and Malaysia and Thailand have metre-gauge railways. Narrow-gauge trams, particularly metre-gauge, are common in Europe. Non-industrial, narrow-gauge mountain railways are (or were) common in the Rocky Mountains of the United States and the Pacific Cordillera of Canada, Mexico, Switzerland, Bulgaria, the former Yugoslavia, Greece, and Costa Rica.

A narrow-gauge railway is one where the distance between the inside edges of the rails is less than 1,435 mm (4 ft 8 1⁄2 in).[2] Historically, the term was sometimes used to refer to standard-gauge railways, to distinguish them from broad-gauge railways, but this use no longer applies. 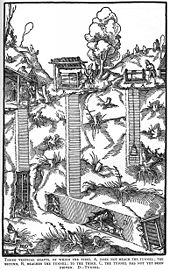 1556 woodcut from De re metallica, showing a narrow-gauge railway in a mine

The earliest recorded railway appears in Georgius Agricola's 1556 De re metallica, which shows a mine in Bohemia with a railway of about 2 ft (610 mm) gauge. During the 16th century, railways were primarily restricted to hand-pushed, narrow-gauge lines in mines throughout Europe. In the 17th century, mine railways were extended to provide transportation above ground. These lines were industrial, connecting mines with nearby transportation points (usually canals or other waterways). These railways were usually built to the same narrow gauge as the mine railways from which they developed.[3]

Extensive narrow-gauge rail systems served the front-line trenches of both sides in World War I.[7][8] They were a short-lived military application, and after the war the surplus equipment created a small boom in European narrow-gauge railway building.

An Electric Tilt Train in Queensland. Unlike other states in Australia which use different gauges, Queensland's network is made up of 3 ft 6 in (1,067 mm)-gauge track.

The heavy-duty 3 ft 6 in (1,067 mm) narrow-gauge railways in Queensland, South Africa, and New Zealand demonstrate that if track is built to a heavy-duty standard, performance almost as good as a standard-gauge line is possible.

A special 2 ft (610 mm) gauge railcar was built for the Otavi Mining and Railway Company with a design speed of 137 km/h.[14] Curve radius is also important for high speeds: narrow-gauge railways allow sharper curves, but these limit a vehicle's safe speed.

4 ft 6 in (1,372 mm) track gauge (also known as Scotch gauge) was adopted by early 19th-century railways, primarily in the Lanarkshire area of Scotland. 4 ft 6 1⁄2 in (1,384 mm) lines were also constructed, and both were eventually converted to standard gauge.

According to Italian law, track gauges in Italy were defined from the centre of each rail rather than the inside edges of the rails. This gauge, measured 950 mm (3 ft 1 3⁄8 in) between the edges of the rails, is known as Italian metre gauge. 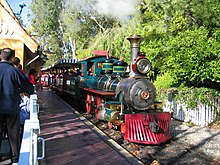 There were a number of large 3 ft (914 mm) railroad systems in North America; notable examples include the Denver & Rio Grande and Rio Grande Southern in Colorado and the South Pacific Coast and West Side Lumber Co of California. 3 ft was also a common track gauge in South America, Ireland and on the Isle of Man. 900 mm was a common gauge in Europe. Swedish three-foot-gauge railways (891 mm or 2 ft 11 3⁄32 in) are unique to that country.

A few railways and tramways were built to 2 ft 9 in (838 mm) gauge, including Nankai Main Line (later converted to 3 ft 6 in or 1,067 mm), Ocean Pier Railway at Atlantic City, Seaton Tramway (converted from 2 ft) and Waiorongomai Tramway. 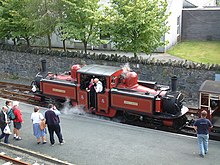 Gauges below 1 ft 11 1⁄2 in (597 mm) were rare. Arthur Percival Heywood developed 15 in (381 mm) gauge estate railways in Britain and Decauville produced a range of industrial railways running on 500 mm (19 3⁄4 in) and 400 mm (15 3⁄4 in) tracks, most commonly in restricted environments such as underground mine railways, parks and farms, in France. Several 18 in (457 mm) gauge railways were built in Britain to serve ammunition depots and other military facilities, particularly during World War I.