Napoleon and the Catholic Church 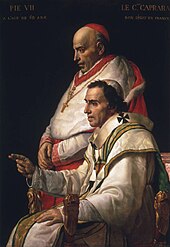 Pius VII with Cardinal Caprara, papal legate to France. Study for The Coronation of Napoleon, painting by David.

The relationship between Napoleon and the Catholic Church was an important aspect of his rule. 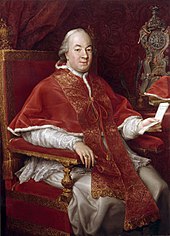 In 1796, French Republican troops under the command of Napoleon Bonaparte invaded Italy, defeated the papal troops and occupied Ancona and Loreto.

Pope Pius VI sued for peace, which was granted at Tolentino on February 19, 1797; but on December 28 of that year, in a riot blamed by Papal forces on Italian and French revolutionaries, the popular brigadier-general Mathurin-Léonard Duphot, who had gone to Rome with Joseph Bonaparte as part of the French embassy, was killed and a new pretext was furnished for invasion. General Berthier marched to Rome, entered it unopposed on February 10, 1798, and, proclaiming a Roman Republic, demanded of the Pope the renunciation of his temporal power.

Upon his refusal he was taken prisoner, and on February 20 was escorted from the Vatican to Siena, and thence to the Certosa near Florence. The French declaration of war against Tuscany led to his removal (he was escorted by the Spaniard Pedro Gómez Labrador, Marquis of Labrador) by way of Parma, Piacenza, Turin and Grenoble to the citadel of Valence, the chief town of Drôme where he died six weeks after his arrival, on August 29, 1799, having then reigned longer than any Pope.

Pius VI's body was embalmed, but was not buried until January 30, 1800 after Napoleon saw political advantage to burying the deceased Pope in efforts to bring the Catholic Church back into France.

Napoleon realized the importance of religion as a means to increase obedience and his control over the French. It was not until the conclave of Cardinals had gathered to elect a new Pope that Napoleon decided to bury Pope Pius VI who had died several weeks earlier. He gave him a gaudy ceremony in an effort to gain the attention of the Catholic Church. This eventually led to the Concordat of 1801 negotiated by Ercole Consalvi, the Pope's secretary of state, which re-systemised the linkage[clarification needed] between the French church and Rome. However, the Concordat also contained the "Organic Articles" which Consalvi had fiercely denied Napoleon, but which the latter had installed regardless.

The papacy had suffered a major loss of church lands through secularizations in the Holy Roman Empire following the Peace of Lunéville (1801), when a number of German princes were compensated for their losses by the seizure of ecclesiastical property.

The Concordat of 1801 is a reflection of an agreement between Napoleon Bonaparte and Pope Pius VII that reaffirmed the Roman Catholic Church as the majority church of France and restored some of its civil status.

While the Concordat restored some ties to the papacy, it was largely in favor of the state; the balance of church-state relations had tilted firmly in Napoleon Bonaparte's favour. As a part of the Concordat, he presented another set of laws called the Organic Articles.

From the beginning of his papacy to the fall of Napoleon I Bonaparte in 1815, Pius VII was completely involved with France.[clarification needed] He and Napoleon were continually in conflict, often involving the French military leader's wishes for concessions to his demands. 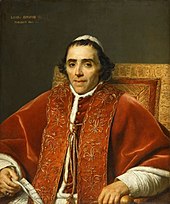 Against the wish of most of the Curia, Pius VII traveled to Paris for Napoleon's coronation in 1804. Although the Pope and the papacy were promised several luxurious gifts and monetary donations, the Pope initially refused most of these offers. Napoleon acquiesced but did produce the Napoleon Tiara, which had as its main jewel, large emeralds from the Tiara of Pope Pius VI, which Napoleon's troops had previously looted. The painting by David titled The Coronation of Napoleon depicts the seated pope at the ceremony. In the painting the Emperor is crowning his wife; prior to this specific moment, Napoleon had placed the crown on his head himself, spurning the Pope's intent to do the same. Another concession was that the Portrait of Pope Pius VII was commissioned from David, and given to the Pope.

Appointed by Napoleon 4 April 1803 to succeed Cacault on the latter's retirement from the position of French ambassador at Rome, Cardinal Joseph Fesch was assisted by Châteaubriand[clarification needed], but soon sharply differed with him on many questions. Towards the close of 1804, Napoleon entrusted to Fesch the difficult task of securing the presence of Pope Pius VII at the forthcoming coronation of the emperor at Notre Dame, Paris (December 2, 1804). His tact in overcoming the reluctance of the pope (it was only eight months after the execution of the duc d'Enghien) received further recognition. He received the grand cordon of the Légion d'honneur, became grand-almoner of the empire and had a seat in the French senate. He was to receive further honours. In 1806 one of the most influential of the German clerics, Karl von Dalberg, then prince-bishop of Regensburg, chose him to be his coadjutor and designated him as his successor.

Subsequent events damaged his prospects. In the course of the years 1806-1807, Napoleon came into sharp collision with the Pope on various matters both political and religious. Fesch sought in vain to reconcile them. Napoleon was inexorable in his demands, and Pius VII refused to give way where the discipline and vital interests of the church seemed to be threatened. The emperor several times rebuked Fesch for what he thought to be weakness and ingratitude. It is clear, however, that the Cardinal went as far as possible in counselling the submission of the spiritual to the civil power. For a time he was not on speaking terms with the pope; and Napoleon recalled him from Rome.

Role of the Archbishop of Paris

Napoleon appointed Jean-Baptiste de Belloy bishop to the See of Paris. Notwithstanding his extreme age he governed his new diocese with astonishing vigour and intelligence, reorganized the parishes, provided them with good pastors, and visited his flock in person. He restored the Crown of Thorns (10 August 1806) to its place of honour in the Sainte Chapelle. Napoleon was so well satisfied that he asked and readily obtained for him the cardinal's hat, which Pius VII placed on the prelate's head in a consistory held in Paris, 1 February 1805.

Relations between the Church and Napoleon deteriorated. On February 3, 1808, General Miollis occupied Rome with a division. In the next month, the puppet Kingdom of Italy annexed the papal provinces Ancona, Macerata, Fermo, and Urbino, and diplomatic relations were broken off.

On 17 May 1809, Napoleon issued two decrees from the Schönbrunn Palace near Vienna in which he reproached the popes for the ill use they had made of the donation of Charlemagne, his "august predecessor", and declared those territories which were still under the direct control of the Papal State were to be annexed to the French empire. The territories were to be organized under Miollis with a council extraordinary to administer them. As compensation the Pope would receive a stipend of 2,000,000 francs per annum.[1][2] On 10 June Miollis had the Pontifical flag, which still floated over the castle of St. Angelo, lowered.[1]

When Pius VII subsequently excommunicated Napoleon, one of Napoleon's officers saw an opportunity to gain praise. Although Napoleon had captured Castel Sant'Angelo and intimidated the Pope by pointing cannons at his papal bedroom, he did not instruct one of his most ambitious lieutenants, Lieutenant Radet, to kidnap the Pope. Yet once Pius VII was a prisoner, Napoleon did not offer his release; the Pope was moved throughout Napoleon's territories, in great sickness at times, though most of his confinement took place at Savona. Napoleon sent several delegations of his supporters to pressure the Pope on various issues: yielding power; and signing a new concordat with France. 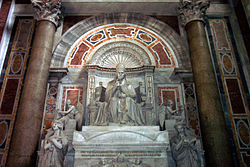 The monument to Pius VII in St. Peter's Basilica

The Pope remained in confinement for over six years, and did not return to Rome until May 24, 1814, when the 5th Radetzky Hussars of the Allied forces freed the Pope during a pursuit of Napoleonic forces.[3] The Hungarian Hussars escorted the pope back to Rome through the Alps. The cold weather wore Pius VII out but an officer gave him his own coat, this officer was Captain János Nepomuki Horváth who gave the base of the main protagonist of Sándor Petőfi's epic poem "János Vitéz".

For his gallantry János N. Horváth received the highest papal decoration the Supreme Order of Christ and the pope gave the 5th Radetzky Hussars a flag with the text "Ungariae Patronae Pium comitatis ad Urbem; O felix tanto Roma sub auspicio - Boldog vagy Róma, hogy érzed a Magyarok Nagyasszonyának oltalmát, ki Piust a Városba kísérte" ("You are happy Rome to feel the protection of Our Lady of Hungary, who accompanied Pius to the City"). The flag is in the Arsenal today.

In a final remark on the situation, the pope had his secretary compose a letter to the British government asking for better treatment of the exiled emperor at Saint Helena. One of the final lines of the note stated, “He can no longer be a danger to anybody. We would not wish him to become a cause for remorse.”

At the Congress of Vienna (1814–1815) the Papal States were largely restored. The Jesuits were restored. The Pope offered a refuge in his capital to the members of the Bonaparte family. Princess Letitia, the deposed emperor's mother, lived there; likewise did his brothers Lucien and Louis and his uncle, Cardinal Fesch.

Reconciliation with the Church

In February 1821, while exiled at Saint Helena island, Napoleon's health began to deteriorate rapidly. He reconciled with the Catholic Church. He died on 5 May 1821, after receiving the Sacraments of Confession, Extreme Unction and Viaticum in the presence of Father Ange Vignali.