Advertisement - You can get this game from STEAM
This article is about the city in France. For other uses, see Nancy.
Prefecture and commune in Grand Est, France

The motto of the city is Non inultus premor, Latin for '"I am not injured unavenged"'[6]—a reference to the thistle, which is a symbol of Lorraine.

Place Stanislas, a large square built between March 1752 and November 1755 by Stanislaus I of Poland to link the medieval old town of Nancy and the new town built under Charles III in the 17th century, is a UNESCO World Heritage Site, the first place in France and in the top four in the world.

The earliest signs of human settlement in the area date to 800 BC. Early settlers were likely attracted by easily mined iron ore and a ford in the Meurthe River. Its name is first attested as Nanciaco, possibly from a Gaulish personal name. A small fortified town named Nanciacum (Nancy) was built by Gérard, Duke of Lorraine around 1050.

Nancy was burned in 1218 at the end of the War of Succession of Champagne, and conquered by Emperor Frederick II. It was rebuilt in stone over the next few centuries as it grew in importance as the capital of the Duchy of Lorraine. Duke Charles the Bold of Burgundy, was defeated and killed in the Battle of Nancy in 1477; René II, Duke of Lorraine became the ruler.

Following the failure of both Emperor Joseph I and Emperor Charles VI to produce a son and heir, the Pragmatic Sanction of 1713 left the throne to the latter's next child. This turned out to be a daughter, Maria Theresa of Austria. In 1736, Emperor Charles arranged her marriage to Duke François of Lorraine, who reluctantly agreed to exchange his ancestral lands for the Grand Duchy of Tuscany.

The exiled Polish king Stanisław Leszczyński, father-in-law of the French king Louis XV, was then given the vacant duchy of Lorraine. Under his nominal rule, Nancy experienced growth and a flowering of Baroque culture and architecture. Stanislaus oversaw the construction of Place Stanislaus, a major square and development connecting the old medieval with a newer part of the city. Upon Stanisław's death in February 1766, Lorraine and Barrois became a regular government of the Kingdom of France.[7] A parlement for Lorraine and Barrois was established in Nancy in 1776.[7]

As unrest surfaced within the French armed forces during the French Revolution, a full-scale mutiny, known as the Nancy affair, took place in Nancy in the latter part of summer 1790. A few units loyal to the government laid siege to the town and shot or imprisoned the mutineers.

In 1871, Nancy remained French when Prussia annexed Alsace-Lorraine. The flow of refugees reaching Nancy doubled its population in three decades.[citation needed] Artistic, academic, financial and industrial excellence flourished, establishing what is still the Capital of Lorraine's trademark to this day.[citation needed]

Nancy and other areas of France were occupied by German forces from 1940, renamed Nanzig. During the Lorraine Campaign of World War II, Nancy was liberated from Nazi Germany by the U.S. Third Army in September 1944, at the Battle of Nancy.

Nancy is situated on the left bank of the river Meurthe, about 10 km upstream from its confluence with the Moselle. The Marne–Rhine Canal runs through the city, parallel to the Meurthe. Nancy is surrounded by hills that are about 150 m higher than the city center, which is situated at 200 m above mean sea level. The area of Nancy proper is relatively small: 15 km2. Its built-up area is continuous with those of its adjacent suburbs. The neighboring communes of Nancy are: Jarville-la-Malgrange, Laxou, Malzéville, Maxéville, Saint-Max, Tomblaine, Vandœuvre-lès-Nancy and Villers-lès-Nancy.

The oldest part of Nancy is the quarter Vieille Ville – Léopold, which contains the 14th century Porte de la Craffe, the Palace of the Dukes of Lorraine, the Porte Désilles and the 19th century St-Epvre basilica. Adjacent to its south is the quarter Charles III – Centre Ville, which is the 16th–18th century "new town". This quarter contains the famous Place Stanislas, the Nancy Cathedral, the Opéra national de Lorraine and the main railway station.

The population of the city proper experienced a small decrease in population from 2009 to 2014, placing it behind Metz (117,619) as the second largest city in the Lorraine.[5][8] However, the urban area of Metz experienced population decline from 1990 to 2010 while the urban area of Nancy grew over the same period, becoming the largest urban area in Lorraine and second largest in the "Grand Est" region of northeastern France. Within the Nancy metropolitan area in recent years, the city population declined slightly (2009–2014) at the roughly same time as a small increase in the population of its urban area (2006–2012).

Nancy has an oceanic climate (Köppen: Cfb), although a bit more extreme than most of the larger French cities.[9] By the standards of France it is a "continental" climate with a certain degree of maritimy (unrelated to the Köppen classification, since generally the whole country has a predominant mechanism favored by the West winds).[10][11]

The temperatures have a distinct variation of the temperate zone, both during the day and between seasons but without being very different. Winters are cold and dry in freezing climates. Summers are not always sunny, but warm enough. Mists are frequent in autumn and the winds are light and not too violent. Precipitation tends to be less abundant than in the west of the country. Sunshine hours are almost identical to Paris and the snowy days are the same as Strasbourg (most similar weather conditions).[12] Although the lowest recorded temperature is officially −26.8 °C, some sources consider temperatures from −30 °C on 10 December 1879 before continuous data.[13] 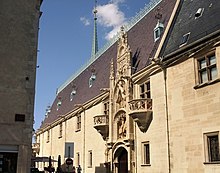 The Ducal Palace of Nancy 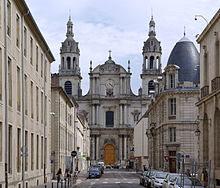 City hall and monument to Stanislaus I of Poland, at Place Stanislas

The old city center's heritage dates from the Middle Ages to the 18th century. The cathedral of Nancy, the Triumphal Arch and the "Place de la Carriere" are a fine examples of 18th-century architecture.[18] The Palace of the Dukes of Lorraine is the former princely residence of the rulers. The palace houses the Musée Lorrain.

A historic church is the Church of Notre-Dame-de-Bonsecours, Nancy, final resting place of the last duke Stanislas. Other notable churches are the Church of Saint-François-des-Cordeliers and the Basilica of Saint-Epvre (fr:Basilique Saint-Epvre de Nancy), which have historical ties to the ducal House of Lorraine.

The Place Stanislas[19] named after king of Poland and duke of Lorraine Stanislaus I, Place de la Carrière, and Place d'Alliance were added on the World Heritage Sites list by the UNESCO in 1983.

The "École de Nancy", a group of artists and architects founded by the glassmaster and furniture maker Émile Gallé, worked in the art nouveau style at the end of the 19th century and the early 20th century. It was principally their work which made Nancy a center of art and architecture that rivaled Paris and helped give the city the nickname "Capitale de l'Est". The city still possesses many Art Nouveau buildings (mostly banks or private homes). Furniture, glassware, and other pieces of the decorative arts are conserved at the Musée de l'École de Nancy, which is housed in the 1909 villa of Eugène Corbin, a Nancy businessman and supporter of the Art Nouveau there. The Musée des Beaux-Arts has further collections of the art nouveau movement.

A major botanical garden, the Jardin botanique du Montet, is located at Villers-lès-Nancy. Other gardens of interest include the city's earliest botanical garden, the Jardin Dominique Alexandre Godron, and various other public gardens and places of interest including the Pépinière and Parc Sainte-Marie (public gardens). The town also has an aquarium.

The surroundings of the train station are a busy commercial area.

Museum of the École de Nancy

The city is known for its World Heritage buildings at the Place Stanislas, which was opened April 2005 by Jacques Chirac after refurbishment.

At the turn of the 20th century, Nancy was a major center of the Art Nouveau with the École de Nancy. The city possesses a unique and interesting Musée de l'École de Nancy (School of Nancy Museum) with artworks by Émile Gallé, Louis Majorelle, Daum, Caravaggio,[20] and others.

Nancy also has other museums:

The city is also the seat of the Diocese of Nancy and the home of the Opéra national de Lorraine. There is a network of libraries, the central of which is Bibliothèque municipale de Nancy. 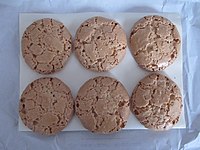 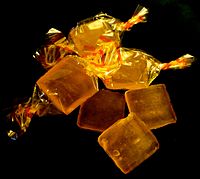 Nancy is known for its macarons and bergamotes, candies flavored with bergamot essential oil. 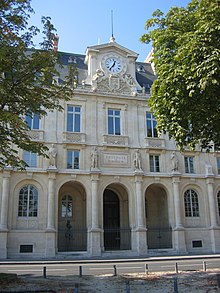 Faculty of Law, Economics and Management of the University of Lorraine

Nancy has a large number of institutions of higher learning.

SLUC Nancy won the last Korac European Cup in 2002, reached the finals of French championship of basketball (Pro A) four consecutive times and finally won his first trophy in 2008. Also winner of "Semaine des As" in 2005 and champion of 2nd league (pro B) in 1994.

Winner of the 2010–2011 French Championship.[clarification needed] 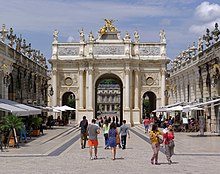 Nancy was the birthplace of:

Nancy's guided busway, known as the 'tramway on tires'

The most heavily used route, the Tram T1, is a so-called 'tramway on tires', which is actually a guided busway based on Bombardier Transportation's Guided Light Transit (GLT) technology and using articulated trolleybuses. In addition to diesel buses, Nancy has been served by trolleybuses since 1982, but in 2000 the three-route trolleybus system was reconfigured into a single, longer route[citation needed] and with a surface guidance system added (GLT, or TVR in French). The guidance systems covers about two-thirds of the approximately 10-km route, and the trolleybuses are separated from other traffic over that portion of the route, speeding travel times. During its first two years, the new system suffered many incidents and malfunctions of the guidance system, but now works without significant problems.[citation needed] 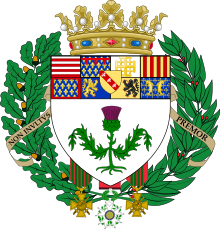 The greater coat of arms.

The coat of arms of Nancy displays a thistle, originally considered to be a symbol of Virgin Mary, and adopted as a personal symbol by René of Anjou and later by his descendant René II, Duke of Lorraine. Contrary to the Scottish thistle, the one of Lorraine is always shown with its roots. During the wars against Burgundy, the thistle became an emblem for the people of Lorraine as a whole. It officially became the attribute of the city of Nancy in 1575 when Charles III, Duke of Lorraine granted the city with its own coat of arms.[28]

The coat of arms displays the motto, which appeared in the end of the 16th century. It was initially "Nul ne s'y frotte" ("no one attacks it"), but it was changed to Latin "Non inultus premor" in 1616. The motto has a similar meaning to the Scottish one, "Nemo me impune lacessit", usually translated as "No one attacks me with impunity", which also makes reference to the thistle. The coat of arms further displays the Legion of Honour, awarded to the city after the First World War, and the War Crosses 14–18 and 39–45.[28]