Nanaimo (/nəˈnaɪmoʊ/) is a city on the east coast of Vancouver Island in British Columbia, Canada. As of the 2016 census, it had a population of 90,504. It is known as "The Harbour City". The city was previously known as the "Hub City", which has been attributed to its original layout design where the streets radiated out from the shoreline like the spokes of a wagon wheel, as well as its generally centralized location on Vancouver Island.[3][4] Nanaimo is also the headquarters of the Regional District of Nanaimo.

See also: List of coal mines and landmarks in the Nanaimo area

The Indigenous peoples of the area that is now known as Nanaimo are the Snuneymuxw. An anglicised spelling and pronunciation of that word gave the city its current name.

The first Europeans to find Nanaimo Bay were those of the 1791 Spanish voyage of Juan Carrasco, under the command of Francisco de Eliza. They gave it the name Bocas de Winthuysen[4] after naval officer Francisco Javier Winthuysen y Pineda. When the Hudson's Bay Company established a settlement in 1852, they named it Colvile Town after HBC governor Andrew Colvile. In 1858 it became Nanaimo.[5]:184 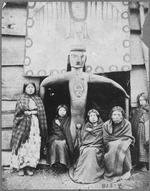 An Internment camp for Ukrainian detainees, many of them local, was set up at a Provincial jail in Nanaimo from September 1914 to September 1915.[6]

In the 1940s, lumber supplanted coal as the main business although Minetown Days are still celebrated in the neighbouring community of Lantzville.[7]

The city has been called "The Harbour City" since the lead up to Expo 86.[8]

Nanaimo has had a succession of four distinct Chinatowns. The first, founded during the gold rush years of the 1860s, was the third largest in British Columbia.[9] In 1884, because of mounting racial tensions related to the Dunsmuir coal company's hiring of Chinese strikebreakers, the company helped move Chinatown to a location outside city limits.[10] In 1908, when two Chinese entrepreneurs bought the site and tried to raise rents, in response, and with the help of 4,000 shareholders from across Canada, the community combined forces and bought the site for the third Chinatown at a new location, focused on Pine Street. That third Chinatown, by then mostly derelict, burned down on 30 September 1960. A fourth Chinatown, also called Lower Chinatown or "new town", boomed for a while in the 1920s on Machleary Street.[9]

Aerial photo of downtown and central Nanaimo and adjacent islands.

Located on the east coast of Vancouver Island, Nanaimo is about 111 kilometres (69 mi) northwest of Victoria,[citation needed] and 55 kilometres (34 mi) west of Vancouver, separated by the Strait of Georgia, and linked to Vancouver via the Horseshoe Bay BC Ferries terminal in West Vancouver and the Duke Point terminal to the Tsawwassen ferry terminal in Tsawwassen. As the site of the main ferry terminal, Nanaimo is the gateway to many other destinations both on the northern part of the island—Tofino, Comox Valley, Parksville, Campbell River, Port Alberni, Rathtrevor Beach Provincial Park—and off its coast—Newcastle Island, Protection Island, Gabriola Island, Valdes Island, and many other of the Gulf Islands.

Buttertubs Marsh is a bird sanctuary located in the middle of the city. The marsh covers approximately 100 acres (40 hectares). Within this is the 46 acre (18.7 hectare) "Buttertubs Marsh Conservation Area", owned by the Nature Trust of British Columbia.

Like much of coastal British Columbia, Nanaimo experiences a temperate climate with mild, rainy winters and warm, dry summers. Due to its relatively dry summers, the Köppen climate classification places it at the northernmost limits of the Csb or warm-summer Mediterranean zone.[11] Other climate classification systems, such as Trewartha, place it firmly in the Oceanic zone (Do).[12]

Nanaimo is usually shielded from the Aleutian Low's influence by the mountains of central Vancouver Island, so that summers are unusually dry for its latitude and location—though summer drying as a trend is found in the immediate lee of the coastal ranges as far north as Skagway, Alaska.

Highways 1, 19 and 19A traverse the city. Bus service in the city is provided by Nanaimo Regional Transit.

According to the 2016 census, Nanaimo is approximately 82% European, 8.4% aboriginal, and has small visible minority groups including 2.2% South Asian, 2.6% Chinese, and 2% Southeast Asian. 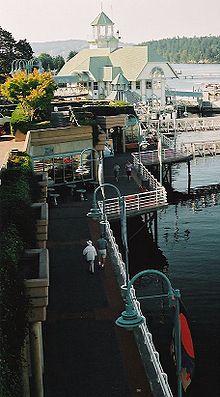 The original economic driver was coal mining; however, the forestry industry supplanted it in the early 1960s with the building of the MacMillan Bloedel pulp mill at Harmac in 1958, named after Harvey MacMillan. Today the pulp mill is owned by the employees and local investors[22] and injects well over half a million dollars a day into the local economy.[citation needed] The largest employer is the provincial government. The service, retail and tourism industries are also big contributors to the local economy.

Technological development on Nanaimo has been growing with companies such as "Inuktun" and the establishment of government-funded Innovation Island as a site to help Nanaimo-based technological start ups by giving them access to tools, education and venture capital.[23]

The average sale price of houses in Nanaimo for 2011 was approximately $350,000.[24] A recent surge of higher-density real estate development, centred in the Old City/Downtown area, as well as construction of a city-funded waterfront conference centre, has proven controversial. Proponents of these developments argue that they will bolster the city's economy, while critics worry that they will block waterfront views and increase traffic congestion. Concerns have also been raised about the waterfront conference centre's construction running over its proposed budget. Nanaimo has also been experiencing job growth in the technology sector.[citation needed]

Nanaimo is served by two newspapers—the Harbour City Star with approximately 37,000 copies once per week, and the Nanaimo News Bulletin (33,000 copies twice a week—audited), which is owned by Black Press. On 29 January 2016, its third newspaper, the 141-year-old Nanaimo Daily News, shut down.[25] Nanaimo also hosts a bureau for CIVI-DT (CTV 2 Victoria, cable channel 12) and a satellite office for CHEK-DT (Independent, cable channel 6).

Nanaimo is also served by the Jim Pattison Group's CHWF-FM (The Wolf) and CKWV-FM (The Wave), as well as CHLY-FM, an independent community campus radio station and Vista Radio's CKAY-FM (Coast FM). CBC Radio One is heard over CBU from Vancouver, providing Nanaimo with local programming from Vancouver instead of from Victoria.

In the House of Commons of Canada, Nanaimo is represented by Paul Manly of the Green Party, representing the riding of Nanaimo—Ladysmith, as a result of a by-election in May 2019. The city was split into two separate ridings, Nanaimo—Cowichan (Jean Crowder, New Democratic Party), which includes South Nanaimo and Cassidy, and Nanaimo—Alberni (James Lunney, Independent elected as a Conservative), which includes North Nanaimo and Lantzville, until the 2012 federal electoral redistribution.

In the Legislative Assembly of British Columbia, Nanaimo is represented by the ridings of Nanaimo (Sheila Malcolmson, BC NDP) and Nanaimo-North Cowichan (Doug Routley, BC NDP). Leonard Krog resigned in 2018 to accept the position of Mayor of Nanaimo. In response, Sheila Malcolmson resigned from federal politics and successfully ran for the vacated position.

The mayor of Nanaimo is currently Leonard Krog, who replaced Bill Mackay in 2018.

The most well-known mayor Nanaimo ever had was Frank J. Ney, who instigated Nanaimo's well-known bathtub races, which he regularly attended dressed as a pirate. There is a statue to commemorate Ney—dressed in his pirate costume—at Swy-a-Lana Lagoon, which is on the Nanaimo waterfront. Ney was also an MLA for the Social Credit party while he was also mayor.[26] An elementary school has been named in his honour.

The city's planning department has, over the past five years,[when?] steadily produced enough municipal data to warrant a Time magazine article on open-government. Nanaimo has been dubbed "the capital of Google Earth".[28] Working directly with Google, the city fed it a wealth of information about its buildings, property lines, utilities and streets. The result is earth.nanaimo.ca, a wealth of city data viewed through the Google Earth 3D mapping program.[29] Their Open Data Catalogue is available at data.nanaimo.ca.[30]

Nanaimo has over 30 elementary and secondary schools, most of which are public and are operated by School District 68 Nanaimo-Ladysmith.

Aspengrove School is a JrK-grade 12 Independent (private) school accredited as an International Baccalaureate World School and offers the IB Primary Years, IB Middle Years and IB Diploma programme and received a 10 out of 10 by the IB Organization (IBO) in 2011.

The main campus of Vancouver Island University is located in Nanaimo, which brings many international students, mostly East Asian, to the city.

The Nanaimo Art Gallery is a public art museum located downtown at 150 Commercial Street. In addition to contemporary exhibitions by local, national and international artists, the Gallery operates Art Lab which offers year-round art-based programs for learners of all ages. The Gallery also holds a collection of artwork, operates The Gallery Store, which features work by local artists and artisans, and runs Artists in the Schools, a program that operates across three school districts.[32][non-primary source needed]

The Nanaimo Museum is a public historical museum located downtown on the traditional territory of the Snuneymuxw First Nation at 100 Museum Way.

The Port Theatre in downtown Nanaimo hosts many performers and shows during the year.[33][34] Smaller, local theatre companies such as in Other Words Theatre, Western Edge Theatre and Schmooze Productions perform at the Nanaimo Centre Stage. Nanaimo also began running a fringe theatre festival in 2011.[citation needed]

A huge component of the underground music scene in Nanaimo is from the student body of Vancouver Island University. The Nanaimo Blues Society has organized and presented five Summertime Blues festivals. These outdoor blues festivals have been held in downtown Nanaimo featuring local, provincial, national and internationally renowned blues musicians.[citation needed]

The Nanaimo Concert Band, known as the oldest continuous community band in Canada, was established in 1872. They maintain a regular schedule of concerts.[citation needed]

The Nanaimo Conservatory of Music, a non-profit, charitable organization has been offering classical music lessons and producing concerts since 1977.[citation needed]

The Nanaimo bar, which is a no-bake cookie bar with custard filling, is a Canadian dessert named after Nanaimo.

Nanaimo hosts the annual Nanaimo Marine Festival. Part of the festival includes the bathtub race. The race starts in the Nanaimo harbour downtown, goes around Entrance Island, north west to Winchelsea Islands by Nanoose Bay and finish in Departure Bay back in Nanaimo. Until the 1990s the race alternated between racing from Nanaimo to Vancouver and from Vancouver to Nanaimo.[36]

Nanaimo has one sister city: