The Arabic term Najrān has at least two meanings: both the wooden frame on which a door opens and also 'thirsty'. Local tradition also has it that the land derived its name from the first man to settle in the area, Najran ibn Zaydan ibn Saba ibn Yahjub ibn Yarub ibn Qahtan.

Najran was the Yemeni centre of cloth making and originally, the kiswah or the cloth of the Ka'aba was made there (the clothing of the Kaba first started by the Yemeni kings of Saba). There used to be a Jewish community at Najran, renowned for the garments they manufactured. According to Yemenite Jewish tradition, the Jews of Najran traced their origin to the Ten Tribes. Najran was also an important stopping place on the Incense Route.

The history of Najrān can be traced back to 4,000 years ago. It was once occupied by the Romans; in fact it was the first Yemeni city to fall to the Romans on their way to the Yemeni kingdom of Saba'. Najrān's most prosperous trading time was during the 1st and 2nd centuries BC. In ancient times it was known as Al-Ukhdūd.

Similarly to other ancient place names in Arabia, Najrān may have originally been the name of the whole oasis including all towns and villages. The old name of the ruins now known as "al-Ukhdūd", which may have been the central town, was probably Ragmat.

Najrān was a focal point of the Incense Route. All routes that left ancient Yemen to the north or west had to meet at Najrān, where the routes branched into two general directions, the ones leading north through the Ḥijāz towards Egypt and the Levant and those leading to the northeast towards Gerrha near the Persian Gulf.[1]

Najrān was conquered around 685 BC by the Sabean Mukarrib (King) Karib'il Watar I King of Yemen. The later Sabean king Yithi'amar Bayin destroyed RagHmat around 510 BC. Najrān seems to have been under Minaean or Sabean rule at different times during the next centuries and after that it was part of Yemen till 1937.

The Roman prefect of Egypt Aelius Gallus led an costly, arduous and ultimately unsuccessful expedition to conquer Arabia Felix and won a battle near Najrān in 25 BC. He occupied the city and used it as a base from which to attack the Sabaean capital at Ma'rib. According to Strabo,[2] who called it 'Negrana', Najrān was at this time the northernmost city of the realm of Saba'.

When the Ḥimyarites conquered the Sabeans in AD 280 they probably also took control of Najrān. Some time during the 3rd century the people of Najrān sided with the Abyssinians who sent a governor named Sqlmqlm" in inscriptions. The Ḥimyar King Ilsharah Yahdib crushed this rebellion.

The north Arabian Lakhmid king Imru’ al-Qays ibn 'Amqu attacked Najrān in AD 328. Under the influence of Axum, the Christians in Najrān thrived and started an alliance with Aksum again at the beginning of the 6th century.

Christianity must have been introduced into Najrān, as in the rest of South Arabia, in the 5th century AD or perhaps a century earlier. According to the Arab Muslim historian Ibn Isḥāq, Najran was the first place where Christianity took root in South Arabia. According to the contemporary sources, after seizing the throne of the Ḥimyarites, in ca. 518 or 523 Dhū Nuwās, a Jewish king,[3] attacked the Aksumite (mainly Christian) garrison at Zafar, capturing them and burning their churches. He then moved against Najrān, a Christian and Aksumite stronghold. After accepting the city's capitulation, he massacred those inhabitants who would not renounce Christianity. Estimates of the death toll from this event range up to 20,000 in some sources; a surviving letter (where he is called Dimnon) written by Simon, the bishop of Beth Arsham in 524 AD, recounts Dhū Nuwās's persecution in Najrān (modern al-Ukhdūd in Saudi Arabia).[4] The persecution is apparently described and condemned in the Qur'an (al-Buruj:4).[citation needed]

Under the reign of the Caliph ‘Umar, the Christian community of Najrān was deported to Mesopotamia, on the grounds that no non-Muslims were to live in the Arabian Peninsula.[5]

The town of Najrān was already an important centre of arms manufacture during the lifetime of Muhammad. However, it was more famous for leather rather than iron.

Main article: History of the Jews in Saudi Arabia 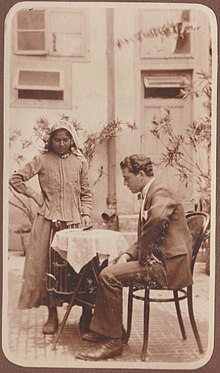 Najrān had a Jewish community dating back to pre-Islamic times, historically affiliated with the Bnei Chorath who were Yemenite Jews that had conquered the city and ruled until the Christian invasion of Yemen.[6] With the Saudi conquest of Najrān in 1934, persecution increased, and some 200 Jews of Najrān fled south to Aden between September and October 1949. The Saudi King ʻAbd al-ʻAziz demanded their return, but the Yemeni king Aḥmad bin Yaḥyá refused, because these refugees were Yemenite Jews. After settling in the Ḥashid Camp (also called Mahane Geula) they were airlifted to Israel as part of the larger Operation Magic Carpet.[7]

Some groups of Najran Jews escaped to Cochin, as they had very good relationship with the rulers of Cochin and maintained trade connections with Paradesi Jews.[8]

Najran as part of Saudi Arabia

Najrān joined the newly announced Kingdom of Saudi Arabia in 1934 as a result of the efforts and struggles of Sheikhs Sultan Bin Muneef and Jābir Abū Sāq, the leaders of two large clans of the Yam tribe. Starting in 1924, the forces of the former Yemeni king launched several unsuccessful raids to annex Najrān to the Yemeni Kingdom. The king of Yemen performed some new maneuvers to strengthen his tie with some of the Najrān tribal leaders to counter the strong relations of the people of Najrān with Bin Saʻūd. Then in 1932 the forces of Imam Yaḥyá of Yemen attacked Najrān with more than 50,000 troops, with all kinds of new weapons. Yām, as the dominant tribe in Najrān, along with some other loyalist Najranis, started strong resistance against the occupation forces. However, a strong segment of the tribal leaders in Najrān sided with the occupying power and some became passive, waiting to take a side at the end of the crisis. Sheikhs Sultan Bin Muneef and Jābir Abū Sāq, the head of two clans of Yām at the time, managed to get quick support from King ʻAbd al-ʻAzīz Bin Saʻūd and was able to lead the Yām tribe and all of the Najrānī resistance fighting the Yemeni forces in all parts of Najrān and Bilād Yām. Later, in the spring of 1934, the army of Bin Saʻud under the command of Prince Saʻūd son of ʻAbd al-ʻAzīz carried out a massive campaign, surrounding Najrān from the north and northwest, and defeated the Yemeni army. Najrān became part of Saudi Arabia. In short, Najran has always been independent and ruled by its people (Yam) but they choose to be annexed to New Kingdom. Indeed, there was a strong treaty between King ʻAbd al-ʻAzīz and the people from Najrān indicating conditions to be respected by both sides.

Issues with the Ismaili community

The Ismailis, a religious and ethnic minority with historic roots in Najrān Province of southwestern Saudi Arabia, face increasing threats to their identity as a result of official discrimination. With the arrival of Mishʻal bin Suʻūd as the governor of Najrān in 1996, tension between local authorities and the Ismaili population increased, culminating in a confrontation between armed Ismāʻīlī demonstrators and police and army units outside the Holiday Inn hotel in Najrān city on April 2000. Official discrimination in Saudi Arabia against Ismāʻīlīs encompasses government employment, religious practices, and the justice system. Government officials exclude Ismāʻīlīs from decision making, and publicly disparage their faith.[9]

The confrontation at the Holiday Inn in Najrān city on April 23, 2000, marked a watershed in Ismāʻīlī relations with the central government. Three months earlier, police had closed all Ismāʻīlī mosques on a religious holiday. On April 23, after security forces and religious morality police arrested an Ismāʻīlī cleric, a large demonstration took place outside the Holiday Inn, where governor Mishʻal resided. After the governor refused for hours to meet the petitioners, an exchange of fire between security forces and armed demonstrators left two Ismāʻīlīs dead and, according to some government accounts, killed one policeman as well. Believing their religious identity to be under attack, Ismāʻili men erected defenses around Khushaywah, the seat of the Ismāʻīlī religious leader, al-Dāʼiʻ al-Muṭlaq (Absolute Guide), and the spiritual capital of Sulaymānī Ismāʻīlīs, a community with followers in India and Pakistan as well as Saudi Arabia and Yemen. Khushaywah, which is an area of Najrān city, includes the Manṣūrah Mosque complex. The army surrounded the Ismāʻīlī positions and placed the city under its control. The standoff ended later the same day without further bloodshed.[10]

Najrān city is famous for its archeological significance. Old Najrān was surrounded by a circular wall, 220 by 230 meters, built of square stone with defensive balconies. It contained several unique buildings. There is also a cemetery south of the external wall. Excavations of this site have uncovered glass, metals, pottery, and bronze artifacts. Square and rectangular buildings have also been found. At Al-Ukhdūd which is south of Najrān city, carvings from those days and human bones can be seen. A museum displays, among other items, a bronze lion head. Najrān's landmarks include the "Rass" stone, a 2-meter-high granite stone.[11]

Najran enjoys three different geographic landscapes, and they are: the oases, mountains, and desert on its east side.

The climate for Najran is a hot desert climate type, typical of the Arabian Peninsula. The rainfall is very sporadic in occurrence and consists of light individual rainfalls. The yearly average high temperatures are lower than Riyadh, despite being further south, due to Najran's elevation.

Najran is home of Najran University and Najran College of Technology.

There are many sports centers and complexes within the city including: