Nafanua was an historical ali'i (chief/queen) and toa (warrior) of Samoa from the Sā Tonumaipe'ā clan, who took four pāpā (district) titles, the leading ali'i titles of Samoa.[1] After her death she became a goddess in Polynesian religion.

There are historical and mythological traditions about Nafanua's family and life. She reportedly played a crucial role in the civil wars between the districts of eastern and western Savai’i. 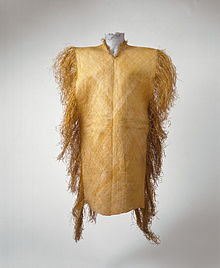 Example of Tiputa (Shirt), similar to the one worn by Nafanua during the wars

According to Samoan mythology, she was the daughter of Saveasi'uleo, also considered a demigod, the Ali'i of Pulotu[2]. Pulotu was both a historical place, and a place of the afterlife for the warriors of Samoa (comparable to the Viking concept of Valhalla). In one tradition, Nafanua's mother was Tilafaiga the sister of Taema, the legendary conjoined twins, whom brought the malu tattoo here in Samoa.

Nafanua was bestowed the title of Toa / Toa Tama'ita'i (or Warrior Princess) for avenging her uncle and bringing peace to Savai'i through military victories. Her village was located on the western side of the island of Savai’i.

During Nafanua's time, the eastern and western sides of Savai’i were engaged in a war for the land and title of the entire island. In Samoan culture, a family is more prestigious if they own a lot of land; and family members (especially males) receive greater titles and a bigger share of the land. According to oral tradition, when High Chief Lilomaiava caught anyone from the east side on the west side of the island, he would force them to climb a coconut tree upside-down as a public punishment

One of the villagers that Lilomaiava caught was Ta'i'i, the uncle of Nafanua and the older brother of Saveasi’uleo. Ta’i'i was punished and was forced to climb the coconut tree feet first. As he was climbing the coconut tree, the pain and humiliation caused him to sigh loudly. Ta'i'i's sighs were overheard by Saveasi'uleo and Nafanua. This made Savesi’uleo angry; consequently he told Nafanua to prepare for war and to cut down the Toa tree. The wood from the tree was to be used to make weapons to drive away Lilomaiava and his army. Immediately Nafanua cut down the Toa tree and left it there to dry. A few days later, she returned to the area where the Toa tree was cut and discovered that the tree had attracted many Pule (seashells). "E gase toa ae ola pule". Literally this means that the shells are living but the Toa tree is dead. But metaphorically speaking, although we have great strength and power as human beings, we do not succeed if we do not have wisdom to make a good, solid decision. It takes courage to make wise decisions.

Before leaving for battle Saveasi'uleo ordered Nafanua, "A pa'ia le pa i Fu'alaga, a'e le tuli au'a le Ali'i o Aiga". This translates to Nafanua being ordered to STOP the killing when she reached the village of Fualaga. Over the course of battle, Nafanua forced the enemy back to the border of their own territory. One tradition holds that she forgot her father's order, and it was only when the wind blew strong enough to lift her tiputa (coverings) that she remembered. The enemy warriors surrendered in shame when they realised that they had been outclassed by a woman.[3] There are a few different interpretations of some of the events, but Nafanua is widely accepted in Polynesia as one of the greatest warriors.

After her victory, Nafanua took possession of the four major chiefly titles of the district: Tui Atua, Tui A‘ana, Gato‘aitele, and Tamasoali‘i. She therefore established the fa’amatai (chiefly system of government) that continues in Samoa today.[3]

In Samoa, the village of Falealupo on the western side of Savai'i is the home of Nafanua.[4] Falealupo is also the site of the entryway into the spirit world Pulotu.[5] Often chiefs from distant villages and islands would come to Falealupo to seek Nafanua's blessings before beginning any military adventure. In 1989, the Chiefs and Orators of Falealupo bestowed the title of Nafanua on ethnobotanist Paul Alan Cox for his conservation efforts in protecting the Samoan rainforest.[6] The title was formally registered with the Samoan Lands and Title Court.

It was in Falealupo, one tradition holds, that Nafanua foretold the coming of Christianity. After years of war, Malietoa Fitisemanu wanted to unite Samoa and end the bloodshed, so he came to Nafanua. After many days, Nafanua prophesied onto Malietoa Fitisemanu, "Fa'atali i lagi se ao o lou malo" ("Wait on the heavens for a crown for your kingdom"). In 1830, the missionary John Williams arrived on the shores (matani'u feagaimaleata) of Sapapali'i and brought the bible from his boat into the hands of Malietoa Vainu'upo, the son of Malietoa Fitisemanu. Thus, Malietoa Vainu'upo became known as "The King whom Samoa listens to". King Malietoa became one of the kings of Samoa and he was instrumental in uniting all of Samoa. These events were considered by many to have fulfilled Nafanua's prophecy.[3][7]