NYSE American, formerly known as the American Stock Exchange (AMEX), and more recently as NYSE MKT, is an American stock exchange situated in New York City. AMEX was previously a mutual organization, owned by its members. Until 1953, it was known as the New York Curb Exchange.[1]

Following the SEC approval of competing stock exchange IEX in 2016, NYSE MKT rebranded as NYSE American and introduced a 350-microsecond delay in trading, referred to as a "speed bump", which is also present on the IEX.[5][6][7] 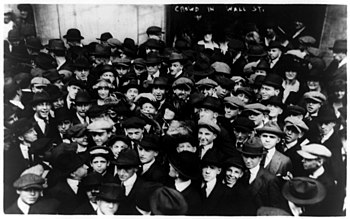 Curb brokers in Wall Street, New York City, 1920, a year before the trading was moved indoors. That year, journalist Edwin C. Hill described the curb trading on lower Broad Street as "a roaring, swirling whirlpool... like nothing else under the astonishing sky that is its only roof."[8]

The exchange grew out of the loosely organized curb market of curbstone brokers on Broad Street in Manhattan. Efforts to organize and standardize the market started early in the 20th century under Emanuel S. Mendels and Carl H. Pforzheimer.[9] The curb brokers had been kicked out of the Mills Building front by 1907, and had moved to the pavement outside the Blair Building where cabbies lined up. There they were given a "little domain of asphalt" fenced off by the police on Broad Street between Exchange Place and Beaver Street.[10] As of 1907, the curb market operated starting at 10 AM, each day except Sundays, until a gong at 3 PM. Orders for the purchase and sale of securities were shouted down from the windows of nearby brokerages, with the execution of the sale then shouted back up to the brokerage.[10]

As of 1907, E. S. Mendels gave the brokers rules "by right of seniority", but the curb brokers intentionally avoided organizing. According to the Times, this came from a general belief that if a curb exchange was organized, the exchange authorities would force members to sell their other exchange memberships.[10] However, in 1908 the New York Curb Market Agency was established, which developed appropriate trading rules for curbstone brokers, organized by Mendels.[11] The informal Curb Association formed in 1910 to weed out undesirables.[8] The curb exchange was for years at odds with the New York Stock Exchange (NYSE), or "Big Board", operating several buildings away. Explained the New York Times in 1910, the Big Board looked at the curb as "a trading place for 'cats and dogs.'"[12] On April 1, 1910, however, when the NYSE abolished its unlisted department, the NYSE stocks "made homeless by the abolition" were "refused domicile" by the curb brokers on Broad Street until they had complied with the "Curb list" of requirements.[12] In 1911, Mendels and his advisers drew up a constitution and formed the New York Curb Market Association, which can be considered the first formal constitution of American Stock Exchange.[11] 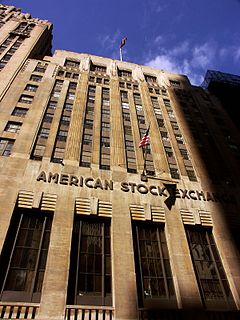 In 1920, journalist Edwin C. Hill wrote that the curb exchange on lower Broad Street was a "roaring, swirling whirlpool" that "tears control of a gold-mine from an unlucky operator, and pauses to auction a puppy-dog. It is like nothing else under the astonished sky that is its only roof."[13] After a group of Curb brokers formed a real estate company to design a building, Starrett & Van Vleck designed the new exchange building on Greenwich Street in Lower Manhattan between Thames and Rector, at 86 Trinity Place. It opened in 1921,[8] and the curbstone brokers moved indoors on June 27, 1921.[14] In 1929, the New York Curb Market changed its name to the New York Curb Exchange.[15] The Curb Exchange soon became the leading international stock market, and according to historian Robert Sobel, "had more individual foreign issues on its list than [...] all other American securities markets combined."[16]

Edward Reid McCormick, was the first president of the New York Curb Market Association and is credited with moving the market indoors.[17][18] George Rea was approached about the position of president of the New York Curb Exchange in 1939.[19] He was unanimously elected[19] as the first paid president in the history of the Curb Exchange. He was paid $25,000 per year (equivalent to $460 thousand today[20]) and held the position for three years before offering his resignation in 1942.[21] He left the position having "done such a good job that there is virtually no need for a full-time successor."[22]

Modernization as the American Stock Exchange

As of 1971, it was the second largest stock exchange in the United States. Paul Kolton succeeded Ralph S. Saul as AMEX president on June 17, 1971,[24] making him the first person to be selected from within the exchange to serve as its leader, succeeding Ralph S. Saul, who announced his resignation in March 1971.[27][28] In November 1972, Kolton was named as the exchange's first chief executive officer and its first salaried top executive.[29] As chairman, Kolton oversaw the introduction of options trading. Kolton opposed the idea of a merger with the New York Stock Exchange while he headed the exchange saying that "two independent, viable exchanges are much more likely to be responsive to new pressures and public needs than a single institution".[28] Kolton announced in July 1977 that he would be leaving his position at the American Exchange in November of that year.[30]

In 1977, Thomas Peterffy purchased a seat on the American Stock Exchange and played a role in developing Interactive Brokers, an electronic trading platform. Peterffy created a major stir among traders by introducing handheld computers onto the trading floor in the early 1980s.[31][32]

As of 2003, AMEX was the only U.S. stock market to permit the transmission of buy and sell orders through hand signals.[33]

In October 2008 NYSE Euronext completed acquisition of the AMEX for $260 million in stock.[34] Before the closing of the acquisition, NYSE Euronext announced that the AMEX would be integrated with the Alternext European small-cap exchange and renamed the NYSE Alternext U.S.[3] The American Stock Exchange merged with the New York Stock Exchange (NYSE Euronext) on October 1, 2008.[4] Post merger, the Amex equities business was branded "NYSE Alternext US". As part of the re-branding exercise, NYSE Alternext US was re-branded as NYSE Amex Equities.[4] On December 1, 2008, the Curb Exchange building at 86 Trinity Place was closed, and the Amex Equities trading floor was moved to the NYSE Trading floor at 11 Wall Street.[4] 90 years after its 1921 opening, the old New York Curb Market building was empty but remained standing.[8] In March 2009, NYSE Alternext U.S. was changed to NYSE Amex Equities. On May 10, 2012, NYSE Amex Equities changed its name to NYSE MKT LLC.[4]

In June 2016, a competing stock exchange IEX (which operated with a 350-microsecond delay in trading), gained approval from the SEC, despite lobbying protests by the NYSE and other exchanges and trading firms.[35] On July 24, 2017, the NYSE renamed NYSE MKT to NYSE American, and announced plans to introduce its own 350-microsecond "speed bump" in trading on the small and mid-cap company exchange.[5][6][7]