The Department of Transportation's responsibilities include day-to-day maintenance of the city's streets, highways, bridges, sidewalks, street signs, traffic signals, and street lights. DOT supervises street resurfacing, pothole repair, parking meter installation and maintenance, and municipal parking facility management. DOT also operates the Staten Island Ferry. DOT is the exclusive provider of day-to-day operations and maintenance state-maintained roads and highways in city limits, while major repairs and capital improvements on state-owned roads are performed by the State DOT (NYSDOT). Both DOT and NYSDOT reserve the right to install signage, signals, and other roadway features on state highways, which then become maintained on a daily basis by DOT. DOT sets the speed limit on all roads and highways in the city, including those owned by NYSDOT.

DOT is also responsible for oversight of transportation-related issues, such as authorizing jitney van services and permits for street construction. DOT also advocates for transportation safety issues, including promotion of pedestrian and bicycle safety.

Its regulations are compiled in title 34 of the New York City Rules.

One of the larger groups of traffic restrictions implemented by the DOT is in Midtown Manhattan, where the DOT maintains a system of "thru streets" and split traffic-signal phases to prevent congestion on west-east streets.[8] 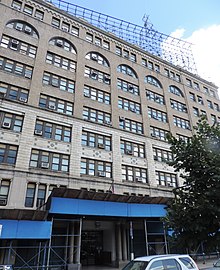 The DOT operates 794 roadway and pedestrian bridges throughout New York City, including 25 movable bridges.[10] The agency's portfolio includes most of the East River and Harlem River bridges, as well as smaller bridges throughout the city. DOT operates two retractable bridges (the Borden Avenue and Carroll Street bridges). Other agencies that operate road bridges in New York include the MTA, the PANYNJ, and the NYSDOT.