NRK (an abbreviation of the Norwegian: Norsk rikskringkasting AS, generally expressed in English as the Norwegian Broadcasting Corporation) is the Norwegian government-owned radio and television public broadcasting company, and the largest media organisation in Norway. All other TV channels, broadcast from Norway, were banned from 1960 until 1981. NRK broadcasts three national TV channels and three national radio channels on digital terrestrial television, digital terrestrial radio and subscription television. All NRK radio stations are being streamed online at NRK.no, which also offers an extensive TV service. NRK is a founding member of the European Broadcasting Union.[3]

Until 01.01.2020 About 94% of NRK's funding comes from a mandatory annual licence fee payable by anyone who owns or uses a TV or device capable of receiving TV broadcasts. The remainder comes from commercial activities such as programme and DVD sales, spin-off products, and certain types of sponsorship. NRK's license income in 2012 was more than 5 billion kroner. In the autumn of 2015, the government announced that it planned to change the way NRK is financed. This is in part a reaction to the decline of TV ownership in Norway. From 01.01.2020 the NRK funding is an item in the national budget and the costs are covered through taxation for each individual liable for income taxes in Norway.

Kringkastningsselskapet A/S, a privately owned company and the predecessor of NRK, started regular radio broadcasts in Norway in 1925. NRK itself was founded in 1933. Based on a model similar to that of the BBC and located in Oslo, it was a replacement for privately operated radio stations in larger cities. NRK initially set out to cover the entire country and had a monopoly on broadcasting in Norway. The monopoly came under intense pressure when Norwegian TV companies began broadcasting from abroad in addition to international cable TV. Cable TV started in 1982 and satellite TV in 1986 (the launch of TV3 in 1987 and TVNorge in 1988). It was not until the launch of TV 2 on 5 September 1992, that NRK's monopoly on television broadcasting in Norway ended.

During the Nazi German occupation, Norwegian transmitters were used to broadcast Nazi German war propaganda to Northern Europe (particularly Scotland and the northern half of Ireland, where the sea path ensured a good signal) and Scandinavia.

Prior to the Nazi German occupation, NRK had also been partly financed by radio commercials.

NRK was one of 23 founding broadcasting organisations of the European Broadcasting Union, which was founded in 1950. In 1954, NRK started broadcasting television shows, on a trial basis. Regular broadcasts started in 1960.

NRK was the last of the major European public broadcasters to introduce a second radio station,[citation needed] officially starting as late as 1984. In 1993, NRK launched a third radio station, the youth-oriented P3. A 24-hour station for classical music, Alltid Klassisk (now called "NRK Klassisk"), introduced in 1995, was the first of its kind to be broadcast digitally using digital audio broadcasting. The 24-hour news station Alltid Nyheter started in 1997, followed by a radio station for teenagers, mP3 in 2000, which mostly plays dance music.

In 1999, following NRK Interaktiv's relaunch as NRK.no, NRK redesigned its current corporate logo (that were introduced in 1969), so that it could be similar to its old version. This new version of NRK's current corporate logo made its first appearance in an ident in 2000 by making its overhaul to NRK's radio and television channels.

Broadcasting House, one of the main buildings at NRK headquarters at Marienlyst, Oslo

NRK's international radio transmissions, known as Utenlandssendingen, began shortwave transmission in 1948. Initially broadcasting in Norwegian, English-language programs were added later. The service was discontinued on 1 January 2002. All NRK broadcasting activities on shortwave ceased on 1 January 2004. NRK's mediumwave transmitter at Kvitsøy on 1314 kHz used to be widely heard internationally and was one of the most commonly heard trans-Atlantic DX signals in eastern North America. The frequency carried a mixture of NRK's radio channels P1 and P2, and was called Europakanalen (literally "The Europe Channel"). However, these mediumwave transmissions were discontinued on 1 July 2006.

NRK claimed to have the longest-running radio show, Lørdagsbarnetimen (The Saturday Children's Hour), which ran from 20 December 1924 until 11 September 2010.[citation needed] 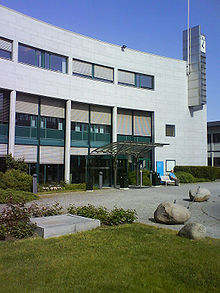 Entrance to Television House, another building at NRK's headquarters

The CEO began major organisational changes in 2008, with the aim of creating a more agile NRK, while still adhering to the principles of the broadcaster-producer model introduced in January 2001.[citation needed] By January 2009, the number of programme-producing divisions had been reduced from five to three, separated more along geographical than functional lines, and at the same time simplifying trading in the internal market.[citation needed] The programme-producing divisions are:

The chairman of the board is Birger Magnus, Marius Lillelien heads the broadcasting department, and the head of the news department is Marius Tetlie.[9] In 2017, NRK employed 3 419 and 266 temporary staff.[10]

NRK has 12 regional offices around Norway. Each office has its own broadcasts on both television (on NRK 1) and radio (on NRK P1), as well their own news sites on the internet. They also contribute news coverage to national news programmes. NRK's headquarters are at Marienlyst in Oslo and Tyholt in Trondheim.

Norway was the first country to announce a complete switch-off of national FM radio stations, including NRK P1 with regional services, NRK P2 and NRK P3, NRK mP3 and NRK Alltid Nyheter. Switch off started on 11 January 2017, and ended on 13 December 2017.

From 2018, all FM transmitters are replaced with broadcast via DAB +, internet and cable.[11]

NRK has an HD outside broadcast van, producing high-definition video.[12] The first Norwegian series filmed in HD was En Udødelig Mann ("An Immortal Man") about the young Henrik Ibsen. The action six-part miniseries called Kodenavn Hunter was also filmed in HD. Promotional videos are freely downloadable from NRK's site, and the full-length last episode is available.[13]

NRK uses H.264 as the compression codec for the digital terrestrial network which is commonly used to compress videos stored as mp4.[14]

NRK has also started to offer HD content via BitTorrent. This is currently a very limited offer due to rights restrictions, but it is growing steadily.[15]

In preparation for the Winter Olympic Games in Vancouver, NRK announced that they would launch a high-definition channel, and their first native HD broadcast would be from Vancouver. NRK1 HD is a simulcast of NRK1.[16]