New Delhi Television Limited (NDTV) is an Indian television media company founded in 1988 by Radhika Roy, a journalist. NDTV started off as a content provider for Doordarshan, producing the show The World This Week in November 1988. In 1998 NDTV started its own 24X7 news channel with STAR and later shifted to its own venture in 2003, launching both the English and Hindi versions of the channel. NDTV's slogan is "Experience. Truth First".

NDTV started out as a content provider company for the public broadcaster Doordarshan.[3] It started off in November 1988 by producing the 30 minute weekly news show The World This Week for Doordarshan.[4] In 1989, NDTV created India's first live coverage and analysis of the general elections. In 1995 NDTV produced a national news show, "Tonight", which was telecast on Doordarshan.[3]

In 1998 NDTV started India's first 24x7 news show in collaboration with Rupert Murdoch's STAR News Channel.[4][3] Interestingly, during the initial years there was always a delay of 10 minutes which later shifted to five minutes between telecast and production of live news due to government restrictions.[3] In 1999, NDTV launched its website.[4]

Channels of NDTV Group are:[5] 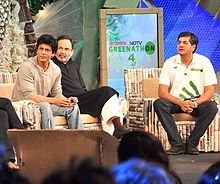 On 20 January 1998, Central Bureau of Investigation filed various cases against New Delhi Television (NDTV) managing director Prannoy Roy, former director general of Doordarshan R. Basu and five other top officials of Doordarshan under Section 120-B of the Indian Penal Code (IPC) for criminal conspiracy and under the Prevention of Corruption Act. According to the Central Bureau of Investigation (CBI) charge-sheet, Doordarshan suffered a loss of over Rs. 35.2 million due to the "undue favours" shown to NDTV as its programme The World This Week (TWTW) was put in 'A' category instead of 'special A' category.[10][11][12][13][14][15]

In November 2010, OPEN magazine carried a story which reported transcripts of some of the telephone conversations of Nira Radia with senior journalists, politicians, and corporate houses, many of whom have denied the allegations. The Central Bureau of Investigation has announced that they have 5,851 recordings of phone conversations by Radia, some of which outline Radia's attempts to broker deals in relation to the 2G spectrum sale.[16] The tapes appear to demonstrate how Radia attempted to use some media persons including NDTV's Barkha Dutt to influence the decision to appoint A. Raja as telecom minister.[17] She left the channel in January 2017.[18]

NDTV, through its foreign subsidiaries have allegedly violated numerous Indian tax and corporate laws.[19] NDTV has denied these allegations.[20]

The Sunday Guardian, a centre-left newspaper ran a story which exposed the NDTV's financial misdemeanours and malpractices in connivance with ICICI Bank.[21] It provides details of how NDTV's major stakeholders raised funds by misdeclaration of the value of shares in NDTV. NDTV CEO claimed[22] to the Sunday Guardian along with the threat of "criminal defamation". On 5 June 2017, the house of Prannoy Roy was raided by NIA and CBI.

On 19 November 2015, the ED served ₹2,030 crore (US$280 million) notice to NDTV for alleged violations under the FEMA act,[23] however the company said it has been advised that the allegations, while true are not "legally tenable".[24]

The "Income Tax Appellate Tribunal" (ITAT) has upheld an income tax department finding that promoters of NDTV used their own shell companies to round-trip investments of ₹642 crore (US$90 million) during 2009–10, making them liable for recovery of tax and penalty.[25]

Regarding an investment by the US TV network, NBC (an 80% subsidiary of GE at the time) into NDTV Networks of $150 million, both NDTV and NBC/GE insist was an absolutely legal and bona fide investment while the IT department claims it is an illegal transaction. NDTV has called it the Indian Authorities variant of "McCarthyism" to suppress the media.[26]

On 5 August 2011, Comptroller and Auditor General of India's report on XIX Commonwealth Games was tabled in Parliament of India. In section 14.4.2 of the report, CAG alleged that while awarding contracts worth ₹37.8 million (US$530,000) for production and broadcast of commercials to promote CWG-2010 to NDTV and CNN-IBN, the Commonwealth Games Organizing Committee followed an arbitrary approach. Proposals were considered in an ad-hoc manner, as and when a proposal was received; no form of competitive tendering was adopted. The CAG further said in its report that, "We had no assurance about the competitiveness of the rates quoted by these channels and the need and usefulness of these proposals. From March 2010 to June 2010, the entire pre games publicity and sponsorship publicity was done only on NDTV & CNN-IBN."[27][28][29]

In 2012, NDTV alleged that TV rating measurement company TAM had indulged in malpractice of influencing and generating favourable TV ratings for their channel. They claimed that two TAM representatives had met NDTV staff in April with an offer to fix the TV ratings in 2–3 weeks by bribing viewers in homes (which otherwise are secret) where the measuring meters were installed. NDTV claimed that this malpractice had resulted in enormous losses for the company over several years and filed a case against TAM, TAM India and its global parent firms for $1.39 billion in the Supreme Court of New York.[30] Subsequently, in 2014, the New York Supreme Court dismissed NDTV's petition citing that since it was based on activities and impact in India, NDTV needed to pursue the case in India instead of the US.[31]

On 4 November 2016, the Union Ministry of Information and Broadcasting ordered the channel to go off air on 9 November for allegedly divulging 'strategically sensitive' details while covering January's deadly attack on the Pathankot air base.[32] Government scrapped their decision on the ban for reasons not made clear.

On 5 June 2017, the CBI raided premises of channel promoters Prannoy and Radika Roy, accusing it of "causing an alleged loss" to ICICI Bank of ₹48 crore (US$6.7 million).[33] The complainant, Sanjay Dutt, Director of Quantum Securities Pvt. Ltd., alleged that the Roys took a loan of around ₹350 crore (US$49 million) from ICICI in 2008–09, putting up their shareholdings in the company at an inflated value as collateral. He added that while the amount was repaid the following year, the accrued interest of ₹50 crore (US$7.0 million) remained unpaid.[34] In its response, NDTV denied any "default on any loan to ICICI or any other bank", while attaching a picture of the bank's 2009 letter that confirmed that the "entire amount due," amounting to ₹375 crore (US$53 million), had "been repaid in full."[35] It added that, "No matter how much the politicians attack us - We will not give up the fight for freedom and the independence of media in India."[36]

As of June 2019[update], Securities and Exchange Board of India barred NDTV chief Prannoy Roy and his wife Radhika Roy from accessing the securities market for 2 years after an investigation revealed that they concealed material info from shareholders regarding loan agreements and hence, they cannot hold management positions in NDTV board.[37][38] In August 2019, its CEO Suparna Singh resigned after CBI booked promoters for alleged FDI norms violation.[39]