Muzaffarabad (Urdu: مُظفّر آباد‎) is the capital of the Pakistan-administered territory of Azad Jammu and Kashmir. It is the largest city of Azad Kashmir and 60th largest in Pakistan.

The city is located in Muzaffarabad District near the confluence of the Jhelum and Neelum rivers. The district is bounded by the province of Khyber-Pakhtunkhwa in the west, by the Kupwara and Baramulla districts of Indian-administered Jammu and Kashmir in the east, and the Neelum District of Azad Kashmir in the north.

Muzaffarabad has largely been rebuilt since the 2005 earthquake.

The city was near the epicenter of the 2005 Kashmir earthquake, which had a magnitude of 7.6. The earthquake destroyed about 50% of the buildings in the city (including most of the official buildings) and is estimated to have killed up to 80,000 people in the Pakistani-controlled areas of Kashmir. As of 8 October 2005 the Pakistani government's official death toll was 87,350. Some estimates put the death toll over 100,000.[4] 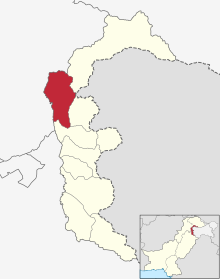 The district of Muzaffarabad is administratively subdivided into 02 tehsils, which are sub-divided into 25 Union Councils[5]

The nearest railway station is located in Rawalpindi District.[7]