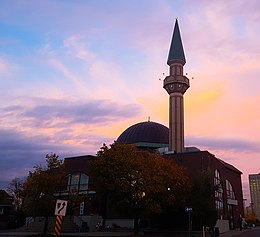 The majority of Canadian Muslims live in the provinces of Ontario and Quebec. According to the 2011 National Household Survey, there were 424,925 Muslims living in the Greater Toronto Area equalling 7.7% of the total metropolitan population.[5] It consists of people especially a large number of Muslims of Pakistani, Bangladeshi, Indian, Iranian and Egyptian/Arab descent. Greater Montreal's Muslim community was 221,040[6] in 2011 or nearly 6% of the total metropolitan population which includes a highly diverse Muslim population from Western/Southern Europe, Caribbean, North Africa, the Middle East, and the Indian subcontinent. Canada's national capital Ottawa hosts many Lebanese, South Asian and Somali Muslims, where the Muslim community numbered approximately 65,880 or 5.5% in 2011.[7] In addition to Toronto, Ottawa and Montreal, nearly every major Canadian metropolitan area has a Muslim community, including Vancouver (73,215), where more than a third are of Iranian descent, Calgary (58,310), Edmonton (46,125), Windsor (15,575), Winnipeg (11,265), and Halifax (7,540). In recent years, there has been rapid population growth in Calgary and Edmonton because of the booming economy.[1]

Most Canadian Muslims are people who were raised Muslim.[citation needed] As with immigrants in general, Muslim immigrants have come to Canada for a variety of reasons. These include higher education, security, employment, and family reunification. Others have come for religious and political freedom, and safety and security, leaving behind civil wars, persecution, and other forms of civil and ethnic strife. In the 1980s, Canada became an important place of refuge for those fleeing the Lebanese Civil War. The 1990s saw Somali Muslims arrive in the wake of the Somali Civil War as well as Bosniaks fleeing the breakup of the former Yugoslavia. However Canada has yet to receive any significant numbers of Iraqis fleeing the Iraqi War. But in general almost every Muslim country in the world has sent immigrants to Canada – from Pakistan, Bosnia and Herzegovina and Albania to Yemen and Bangladesh.[8]

As the Canadian Charter of Rights and Freedoms guarantees freedom of religious expression, Canadian Muslims face no official religious discrimination. Under Section 2(a) of the Charter, the wearing of a hijab is permitted in schools and places of work, although Quebec has ruled that medical faculties are not required to accommodate Muslim women who wish to be served by female employees.[12] Religious holidays and dietary restrictions are also respected, but outside major urban areas it may be difficult to find halal food. It is also often difficult to observe Islamic rules against usury. Some Muslims in some parts of Canada have asked to have family dispute courts to oversee small family cases but were faced with rigorous opposition from both within the Muslim community (both conservative and liberal), and by non-Muslim groups.[13][14]

In 2011, the Harper government attempted to ban the niqab during citizenship ceremonies.[15] In 2015, the Federal Court of Appeal ruled against the ban,[16] and the Supreme Court turned down the government's appeal.

Four years after Canada's founding in 1867, the 1871 Canadian Census found 13 European Muslims among the population.[17][18] The first Muslim organization in Canada was registered by immigrants from Lebanon living in Regina, Saskatchewan in 1934 in. The first Canadian mosque was constructed in Edmonton in 1938, when there were approximately 700 European Muslims in the country.[19] The building is now part of the museum at Fort Edmonton Park. The years after World War II saw a small increase in the Muslim population. However, Muslims were still a distinct minority. It was only after the removal of European immigration preferences in the late 1960s and early 1970s that Muslims began to arrive in significant numbers.

Bosniaks and Albanian Muslims were the founders of Jami Mosque, the first mosque in Toronto in 1968, whose readjustment into masjid (originally an old Catholic school building) occurred on June 23, 1973. The mosque was readjusted for the Bosniaks, with the support of the local Christians. Later, with the action of University of Toronto professor Qadeer Baig, it was purchased by Asian Muslims, while Albanians and Bosniaks later founded the Albanian Muslim Society and Bosanska džamija (Bosnian Mosque) respectively. The oldest mosque in Toronto, with the oldest minaret in Ontario built in Osmanic style is in Etobicoke, part of the Bosnian Islamic Centre.[20]

The first Madrasa (Islamic seminary) in North America, Al-Rashid Islamic Institute was established in Cornwall, Ontario in 1983 to teach Hafiz and Ulama and focuses on the traditional Hanafi school of thought. The Seminary was established by Mazhar Alam, originally from Bihar, India, under the direction of his teacher the leading Indian Tablighi scholar Muhammad Zakariya Kandhlawi. Due to its proximity to the US border city of Massena the school has historically had a high percentage of American students. Their most prominent graduate, Muhammad Alshareef completed his Hifz in the early 1990s then went on to form the AlMaghrib Institute. 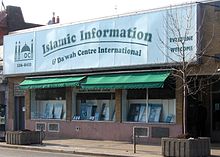 On December 12, 2011, the Canadian Minister of Citizenship and Immigration issued a decree banning the niqab or any other face-covering garments for women swearing their oath of citizenship; the hijab was not affected.[27] This edict was later overturned by a Court of Appeal on the grounds of being unlawful.

In 2017 the Islamic Society of North America, Islamic Services of Canada and Canadian Islamic Trust Foundation were stripped of their status as charities by the government of Canada after an investigation revealed links to a foreign militant group. Both the stripped associations shared their postal address in Mississauga with ISNA Canada.[28]

In 2018, the Ottawa Islamic Centre and Assalam Mosque was stripped of its charity status by the Canadian government because many of its guest speakers were misogynistic, homophobic, racist and promoted violence.[29] The Canada Revenue Agency also raised concerns that radicalized individuals had attended the mosque, one of whom was imprisoned for having attempted to join the Islamic State of Iraq and the Levant.[29]

Major Canadian cities have local Muslim organizations that deal mainly with issues pertaining to their home city, but that support national associations. Most Muslim organizations on the national level are umbrella groups and coordination bodies. Student-led initiatives are generally well supported and successful, including annual events such as MuslimFest and the Reviving the Islamic Spirit conference, the largest Islamic event in Canada.

The Ahmadiyya Muslim Community has about 50 Local Chapters scattered across Canada, mainly in southern Ontario. The community has good relations with the government and helps in humanitarian causes. Baitun Nur is the largest mosque in Canada.[30][31]

In a 2016 Environics poll, 83% of Muslims were "very proud" to be Canadian, compared with 73% of non-Muslim Canadians who said the same thing. Canadian Muslims reported "Canada's freedom and democracy" as the greatest source of pride, and "multiculturalism and diversity" as the second greatest. 94% of Canadian Muslims reported a "strong" or "very strong" sense of belonging to Canada. 48% of Canadian Muslims attend mosque at least once a week. 53% of women wear some sort of head-covering in public (48% wear the hijab, 3% wear the chador and 2% wear the niqab). Both pride in being Canadian and having a strong sense of belonging had increased in Canadian Muslims as compared to a 2006 survey. Mosque attendance and wearing a head covering in public had also increased since the 2006 survey.[37]

A majority (75%) of the Canadians strongly support Muslim women wearing Hijab in Public. However, the wearing of full face and body covering niqab and burka is strongly opposed. Only three-in-ten Canadians are supportive of it.[39]