Advertisement - You can get this game from STEAM
Place in Gorno-Badakhshan Autonomous Region, Tajikistan 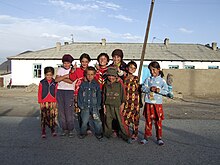 Murghab (Tajik Мурғоб; Russian Мургаб, from the Persian word margh-ab meaning "prairie river"), formerly Pamirski Post is the capital of Murghob District in the Pamir Mountains of Gorno-Badakhshan Autonomous Region, Tajikistan. With a population of 4,000, Murghab is about the only significant town the eastern half of Gorno-Badakhshan. It is the highest town in Tajikistan (and of the former Soviet Union) at 3,650 m above sea level. It located at the junction of the Murghab River and the Pamir Highway.

The Pamir Highway goes north to Sary-Tash and on to Osh in Kyrgyzstan and southwest to the region's capital Khorog. Another road goes east over the Kulma Pass to the Karakoram Highway in China connecting to Tashkurgan to the south and Kashgar in the north.

Russian Officials in 1915 with Pamirski Post in the background

The place was founded by the Russians as Pamirsky Post in 1893, as their most advanced military outpost into Central Asia.[1]

The modern town was constructed during the period of Soviet rule of Tajikistan as a rest stop along the Pamir Highway.