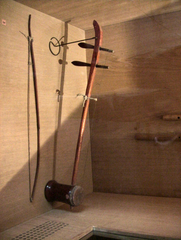 A musical instrument of Muong people

The Mường (Vietnamese: Người Mường) are an ethnic group native to Vietnam.

The Muong is the country's third largest of 53 minority groups, with an estimated population of 1.45 million (according to the 2019 census). The Muong people inhabit the mountainous region of northern Vietnam, concentrated in Hòa Bình Province and the mountainous districts of Thanh Hóa Province. They are most closely related to the ethnic Vietnamese (Kinh). The term "muong" of Thai origin means "cultivated land" or "community". To emphasize their difference from the inhabitants of the valleys and highlanders, Muong call themselves "monglong", which means "people living in the center".

While the Muong are believed to be related to the Vietnamese, ethnologists have theorized that the Muong and Kinh (ethnic Vietnamese) separation happened when the proto-Vietnamese became heavily Sinicised, beginning from the 111 BC invasion by Chinese Emperor Wu of Han, while the Muong, living in the mountains, developed independently. The Muong and the Tai have had a mutual influence on each other's culture, so today the Muong are ethnically and linguistically close to the Vietnamese, but culturally and socially similar to the Tai.

The Muong are one of the 4 main groups of Vietic speakers in Vietnam, the others being the Kinh, Thổ and Chứt. Many Muong have over time intermixed with the Tho and Chut. The Nguồn, who are classified as Kinh, are sometimes believed to be the southernmost group of the Muong, who intermixed with Chut people.

The Muong speak the Muong language, a close relative of Vietnamese. Writing based on the Vietnamese alphabet appeared in the 20th century while the Muong aristocracy were already familiar with Chinese writing through their study of the Confucian canon.

The Muong language is mainly used in the domestic sphere of communication. Most native speakers also speak Vietnamese.

The Muonges live in the north of Vietnam, mainly in the mountainous provinces of Hoa Binh and Thanh Hoa. Around the city of Hoa Binh there are four large Muong population centers: Muonguang, Muongbi, Muongthang and Muongdong. Mainly, the Muonges settle in this area along streams and rivers.

The Muong have many valuable epics (Muong language: mo), such as Te tấc te đác (meaning: Giving birth to the Earth and the Water).

The main holidays of the Muong are New Year and agrarian holidays. During the celebration of the New Year Muong people pray to the ancestors. Such prayers are also arranged on the revolutionary holidays after which the whole village treats themselves to pre-cooked dishes.

Different Muong groups will wear different clothing styles. Some wear clothing borrowed from the Thái, while others wear clothing similar to the Vietnamese. In general, clothing for women consists of some type of tunic or robe, headscarf, and skirt. Some women in the past wore neck rings like other minorities in Northern Vietnam. Men generally wear simple tunics and pants.

Mainly, the Muonges follow Buddhism and Christianity (Catholics), often with local animistic influences. They believe in the existence of harmful spirits (ma tai, ma em, and others). In the past sorcerers sometimes used fear of spirits against people with whom they had personal disputes by declaring them carriers of the spirit ma tai. Deceived peasants beat and sometimes killed innocent people.

After the August Revolution the way of life of Muong people has changed. Large families have given way to small ones. Married brothers no longer live with their parents, but in separate families.

The peasants received community allotments of 1 to 3 Mau per family and industry began to develop. Most villages have primary schools.