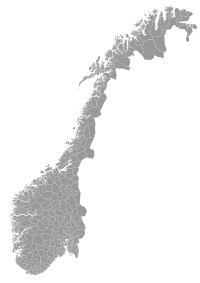 Norway is divided into 11 administrative regions, called counties (fylker in Norwegian, singular: fylke), and 356 municipalities (kommuner/-ar, singular: kommune – cf. communes). The capital city Oslo is considered both a county and a municipality.

Municipalities are the atomic unit of local government in Norway and are responsible for primary education (until 10th grade), outpatient health services, senior citizen services, unemployment and other social services, zoning, economic development, and municipal roads. Law enforcement and church services are provided at a national level in Norway.

The consolidation effort is complicated by a number of factors. Since block grants are made by the national government to the municipalities based on an assessment of need, there is little incentive for the municipalities to lose local autonomy. The national policy is that municipalities should only merge voluntarily, and studies are underway to identify potential gains.