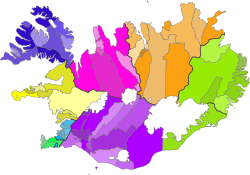 The municipalities of Iceland are local administrative areas in Iceland that provide a number of services to their inhabitants such as kindergartens, elementary schools, waste management, social services, public housing, public transportation, services to senior citizens and handicapped people. They also govern zoning and can voluntarily take on additional functions if they have the budget for it. The autonomy of municipalities over their own matters is guaranteed by the Icelandic constitution.

The origin of the municipalities can be traced back to the commonwealth period in the 10th century when rural communities were organized into communes (hreppar) with the main purpose of providing help for the poorest individuals in society. When urbanization began in Iceland during the 18th and 19th centuries, several independent townships (kaupstaðir) were created. The role of municipalities was further formalized during the 20th century and by the end of the century there was no longer any official distinction between urban and rural municipalities.

The trend in recent years has been to transfer more functions and power from the state to the municipalities. This has called for larger municipalities. The government encourages municipalities to merge but has taken a different approach to the issue than governments in other Nordic countries where forced amalgamation is regularly carried out (such as the municipal reform in Denmark that took effect in 2007). Instead, the process is voluntary. Municipalities negotiate possible mergers among themselves, and any merger must first receive approval from the relevant municipality's constituent voting electorate in a referendum. A similar approach is used by the Faroese government. However, municipalities having a population of below 50 may be forced to merge.