The reciprocal function: y = 1/x. For every x except 0, y represents its multiplicative inverse. The graph forms a rectangular hyperbola.

The term reciprocal was in common use at least as far back as the third edition of Encyclopædia Britannica (1797), to describe two numbers whose product is 1; geometrical quantities in inverse proportion are described as reciprocall, in a 1570 translation of Euclid's Elements.[4]

The notation f −1 is sometimes also used for the inverse function of the function f, which is not in general equal to the multiplicative inverse. For example, the multiplicative inverse 1/(sin x) = (sin x)−1 is the cosecant of x, and not the inverse sine of x denoted by sin−1 x or arcsin x.[5] Only for linear maps are they strongly related (see the discussion on matrices in § Examples and counterexamples below). The terminology difference reciprocal versus inverse is not sufficient to make this distinction, since many authors prefer the opposite naming convention, probably for historical reasons (in French, for example, the inverse function is preferably called bijection réciproque).

The sedenions are an algebra in which every nonzero element has a multiplicative inverse, but which nonetheless has divisors of zero (i.e., nonzero elements x, y such that xy = 0).

A square matrix has an inverse if and only if its determinant has an inverse in the coefficient ring. The linear map that has the matrix A−1 with respect to some base, is then the reciprocal function of the map having A as matrix in the same base. Thus, the two distinct notions of the inverse of a function are strongly related in this case, although they must be carefully distinguished in the general case (as noted above).

A ring in which every nonzero element has a multiplicative inverse is a division ring. Similarly, an algebra in which this holds is a division algebra.

As mentioned above, the reciprocal of every nonzero complex number z = a + bi is complex. It can be found by multiplying both top and bottom of 1/z by its complex conjugate

, and using the property that

, the absolute value of z squared, which is the real number a2 + b2:

For a complex number in polar form z = r(cos φ + i sin φ), the reciprocal simply takes the reciprocal of the magnitude and the negative of the angle: 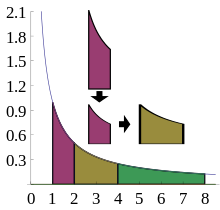 In real calculus, the derivative of 1/x = x−1 is given by the power rule with the power −1:

The power rule for integrals (Cavalieri's quadrature formula) cannot be used to compute the integral of 1/x, because doing so would result in division by 0:

Instead the integral is given by:

where ln is the natural logarithm. To show this, note that

The reciprocal may be computed by hand with the use of long division.

Computing the reciprocal is important in many division algorithms, since the quotient a/b can be computed by first computing 1/b, and then multiplying it by a. Noting that

has a zero at x = 1/b, Newton's method can find that zero, starting with a guess

and iterating using the rule:

This continues until the desired precision is reached. For example, suppose we wish to compute 1/17 ≈ 0.0588 with 3 digits of precision. By letting x0 = 0.1, the following sequence can be produced:

A typical initial guess can be found by rounding b to a nearby power of 2, then using bit shifts to compute its reciprocal.

In constructive mathematics, for a real number x to have a reciprocal, it is not sufficient that x ≠ 0. There must instead be given a rational number r such that 0 < r < |x|. In terms of the approximation algorithm described above, this is needed to prove that the change in y will eventually become arbitrarily small. 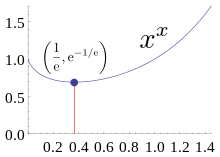 This iteration can also be generalised to a wider sort of inverses (e.g. matrix inverses).

Every number excluding zero has a reciprocal, and reciprocals of certain irrational numbers can have important special properties. Examples include the reciprocal of e (≈ 0.367879) and the golden ratio's reciprocal (≈ 0.618034). The first reciprocal is special, because no other positive number can produce a lower number when put to the power of itself;

is the global minimum of

. The second number is the only positive number that is equal to its reciprocal plus one:

. Furthermore, its additive inverse is the only negative number that is equal to its reciprocal minus one:

gives an infinite number of irrational numbers that differ with their reciprocal by an integer. For example,

less. Such irrational numbers share an evident property: they have the same fractional part as their reciprocal, since these numbers differ by an integer.

The converse does not hold: an element which is not a zero divisor is not guaranteed to have a multiplicative inverse. Within Z, all integers except −1, 0, 1 provide examples; they are not zero divisors nor do they have inverses in Z. If the ring or algebra is finite, however, then all elements a which are not zero divisors do have a (left and right) inverse. For, first observe that the map f(x) = ax must be injective: f(x) = f(y) implies x = y:

Distinct elements map to distinct elements, so the image consists of the same finite number of elements, and the map is necessarily surjective. Specifically, ƒ (namely multiplication by a) must map some element x to 1, ax = 1, so that x is an inverse for a.